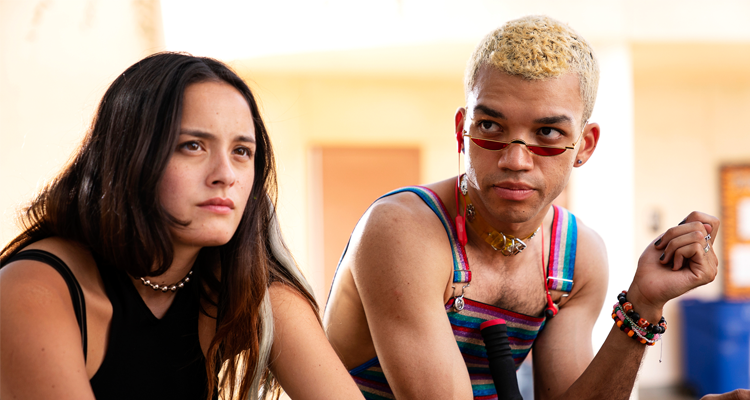 When Nava Mau responded to a DM that came to her Instagram account, it — quite literally — changed her life. The message was regarding an audition, and the actress eventually wound up getting cast in “Genera+ion,” the new HBO Max series premiering next week.

“Genera+ion” is a comedy-drama that revolves around a group of school students exploring their sexualities. With the exception of Martha Plimpton and Sam Trammell, most of the cast is newer faces. Mau, a multiracial trans Latina filmmaker, actress and cultural worker, plays Ana, whose relationship with her sister has dissolved since Ana came out as trans. Nonetheless, Ana is trying hard to be a positive queer figure to her sister’s daughter Greta (Haley Sanchez).

Mau loves Ana’s maternal nature and eventually realized she related to the character. “Ana is lively, and Ana is fearless,” said Mau. “Ana is so abundantly giving. I had to really work on finding a way to play this character that felt very different to me. I found myself going back to earlier iterations of myself, and what I relate to most about Ana is her joyful spirit. I really see her as somebody who has had to fight for her joy, who has had to protect her joy. And I see her as having been triumphant in that fight. That is something I relate to as well.”

Unexpectedly, Ana and Greta wind up living together, and Ana has to adapt. She is known for her kindness, but has little tolerance for things such as transphobia. “Ana is doing her best,” Mau said. “And I think ultimately her best is really good for Greta. Greta gets to see through Ana what it’s like to be your authentic self and be bold in your relationships and be bold with your words. So, Ana is simultaneously a friend and a parental figure to Greta. Greta is dealing with coming to terms with her own identity and how that affects her relationships and how to verbalize that identity and how to express herself through fashion. Ana is having to come to terms with responsibility. We don’t get to see the life before, but there is a clear sense that Ana was not really living a life where she was prioritizing the needs of two children that she was the sole caretaker for.”

Over the course of the season Mau says Ana steps into the role of being a parental figure and holding Greta accountable while teaching her important life lessons and giving her the comfort that a teenager needs.

The pilot was filmed in 2019, and when the show was picked up, the cast and crew resumed last year. The bulk of it has been filmed during the pandemic.

Besides writing, producing, directing and starring in the 2018 short film, “Waking Hour,” Mau was a production fellow on last year’s highly acclaimed documentary, “Disclosure,” which looks at Hollywood’s depiction of transgender people over the years. It was a life-changing event. “I knew when I was working on it that it was going to change the world,” said Mau. “I said to the director, for the people who got to work on the project it was a game changer. For me it set the standard of what a set can feel like. Getting to work as part of the crew and witnessing these hours and hours of interviews with people who’ve been trailblazing in the entertainment industry for decades — it confirmed for me that I have something to offer to the world and to the entertainment industry. I know that’s the case for so many people. Now that it has been released and viewed by thousands, I can only imagine the kind of culture change we’ll see because of it for generations to come.”

It’s essential, Mau says, for trans people to have the opportunities to tell their own stories: “The most recent wide-ranging survey conducted around this topic told us that 80 percent of the people in the United States did not personally know a transgender person. For that majority of the population, the messages and the understandings they have of trans people comes from the media. When you have trans people be given opportunities or create opportunities for themselves to share their own experiences it allows for education and a greater understanding between trans people and cis people. It’s time for media to more accurately represent the world. Trans people exist all over the world and always have.”