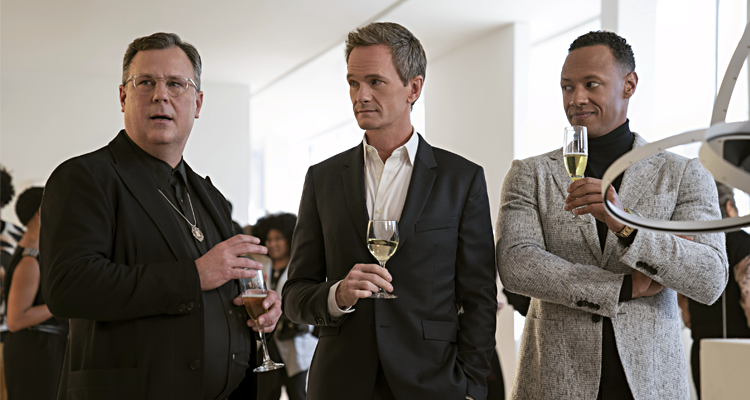 Based on his success with “Sex and the City,” some people might assume Darren Star’s new Netflix comedy, “Uncoupled,” would be a gay version of that. In actuality, it has its own vibe and sensibility.

Star and Jeffrey Richman, who created and wrote the series, had been talking about working on a project and were drawn to the idea of doing a romantic comedy about a gay man, specifically centered around
a breakup.

“We both know stories about people in long-term relationships being left after many years,” Star said. “In this case, it’s about a man who is blindsided by his partner — that was our jumping off point.”

“We wrote this show and thought about who could play this role and Neil was the number one choice that came up for us and possibly the only person who could make it work in the way we imagined,” Star said.

It was important for both men to cast an out gay actor, according to Richman.

In the show, Michael has to relearn dating basics.

“He’s been away from dating and away from that [kind of] technology for 20 years,” Richman said. “If the last time you went on a date was when you were 28 years old, it’s a different thing. Michael is a 48-year-old man. It’s learning; it’s training wheels. ‘What — I’m in a bar but I’m not supposed to be talking to anyone. I’m supposed to be on my phone?’”

Harris was interested in doing TV again after a respite and was intrigued by something filmed in New York, where he lives.

“I think a breakup show is always worth watching, regardless of who you are,” he said. “To create a gay breakup comedy essentially hadn’t been done before. Darren’s track record is great and Jeffrey’s writing is fantastic and allows us to dive into a fairly overt gay relationship in a very universal way.”

Ashmanskas, known to Atlanta audiences for his work in the Alliance Theatre’s world premiere of “The Prom,” related deeply to his character of Stanley, one of Michael’s best friends.

“I see a lot of qualities in him that I see in myself,” the actor said. “He’s a little better at it than I am. I love the way he uses humor in a protective way and in an aggressive way.”

Both Harris and Ashmanskas have been in long monogamous relationships for decades, so the modern dating world is fairly new to them as well.

“It makes us sound older than we already are but the whole algorithmic dating app conceit has changed the game,” Harris said. “It’s no long dating, no longer trying to find someone you want to spend time with. It’s someone you want to get off with in a very specific way. And there is value in that, to be sure. At the same time, you are dealing with emotions. The dating world now lacks connection.”

“Billy tries to keep Michael from driving off of a cliff, keep him happy and be a supportive friend through a support system of laughs, cocktails and lunches, and a shoulder to cry on,” he said. “I like to think I’ve played that role in life sometimes, hopefully better and more responsibly than Billy does.”

Like his character, Watkins has ended a relationship midlife.

“Guess what — it stinks,” he said. “But sometimes it’s part of life. There’s not necessarily a good guy or a bad guy.”

Working with Harris was particularly inspiring, he said.

“Neil is like a surgeon when it comes to his acting style,” Watkins said. “He shows up and he knows exactly what needs to be done — and how to do it. He knows where the joke is, and he doesn’t push anything. He’s a magician.”

“Uncoupled” is now streaming on Netflix.