Aaron first began interviewing black gay couples for his popular blog, Living Out Loud with Darian and after he compiled several representations of gay men and their stories, he decided the stories were  book worthy, inspiring him to write, “When Love Takes Over” in the style of a coffee table book — a book like no other, he says.

“I was frequently frustrated with the images I saw. I never saw a couple that looked like Joe and me,” he said of his boyfriend.

“When I did see an African American man, he was paired with a white guy,” Aaron added. “And I wanted to see healthy examples of our relationships.” 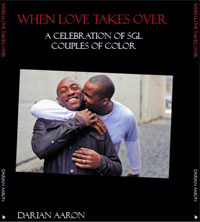 The book is based on the popular “Coupled Up” series Aaron’s blog and profiles 18 African-American gay couples who are in committed long-term relationships.

“The couples detail how they met, their journey towards self-acceptance, liberation and ultimately how they fell in love and maintain their relationships — all the while defying the myth that two black men are incapable of loving each other for a lifetime,” Aaron describes on his blog.

“I wanted people to have some role models to look up to,” he adds. “And one thing I learned is that we are in long-term relationships. They are making it work.”

Aaron said he knew long-term relationships for black gay couples was attainable — he has friends who represent this very well.

Most representation in the media, Aaron adds, are affluent white gay men. Aaron is hoping his book shows that yes, indeed, there are many black gay couples living in long, fulfilling relationships.

I’m hoping to see a true reflection of the LGBT community and a lot of times I don’t think that is shown,” he said.

“We are another slice of life that gets overlooked. And this is why I wrote this book.”

The book is currently available at Outwrite Bookstore & Coffeehouse as well as online. He said he gave his book to Don Lemon, the CNN anchor who recently came out, when Lemon visited the store to talk about his story and  answer questions from fans.

Watch a video ofAaron interviewing one couple featured in his book and how he asks them directly to address this issue: “There’s a myth in the black gay community that committed relationships between black gay men are non-existent and to maintain a stable relationship as a black gay man your partner has to be of another race.”

See what Damien and Seanmichael have to say about this question as well as about how they met and their relationship progressed.