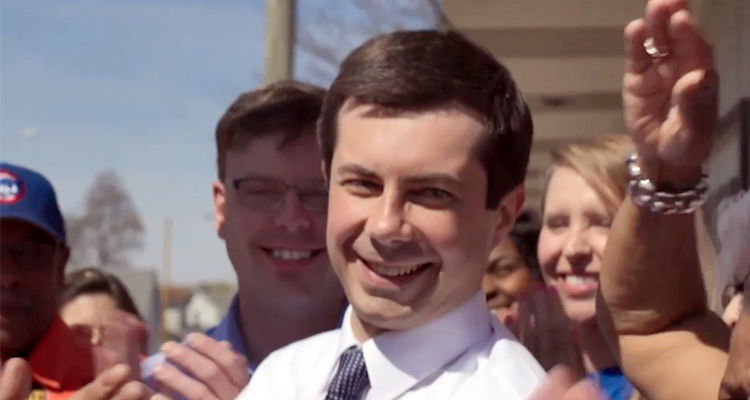 As Pete Buttigieg — the former mayor of South Bend, Indiana — was trying to make history by becoming president of the United States in 2020, most people did not know he had a film crew shadowing him through his campaign. The new documentary. “Mayor Pete,” follows the candidate on the political trail with his husband Chasten.

Director Jesse Moss, who calls himself a political junkie, was paying attention to Buttigieg and knew he was a rising star. “I knew he was thinking of running for president, and it seemed very improbable that he could mount a credible campaign, but the norms of American politics have been shattered,” he said. “Who can be a credible candidate and get elected in the post-Obama election and Trump’s election? Anything is possible, and that was intriguing to me.”

When his friends, who were working as producers on the film, asked him to get involved, Moss initially said no. They asked him to watch a town hall Buttigieg was involved in, however, and Moss admitted to himself that he had something going for him, more than he imagined. He agreed to shoot development footage but still wasn’t convinced there was a film. Once he realized that the access Buttigieg seemed open to was real, he was onboard.

“What was most compelling was the possibility of having access to Buttigieg in this journey, which I didn’t expect to get very far,” Moss said. “The idea of Pete letting us in and seeing a presidential campaign from an intimate perspective was really exciting to me as a documentary storyteller.”

He started filming in April 2019, three weeks before Buttigieg officially announced his campaign. Throughout the campaign, both Pete and Chasten were remarkably composed despite the pressures they were facing.

“I spent a lot of time with Pete over a year filming this from a staff of four to nearly top of the heap,” the director said. “He got exhausted and there were some hard moments, but he managed to be even keeled. Chasten is very different from Pete. Emotionally, he is much more open and alive and funny. Their chemistry was appealing to me. I loved how old fashioned their relationship was in a way but also modern. Here was the millennial gay couple on a big political stage. I loved that they were working it out and letting me in to see the excitement but also the tension together, this rocket ship.”

“There was much more of a relationship, a love story of them holding on tight to each other,” he continued. “It was a way of understanding Pete as a somewhat remote person through Chasten’s point of view. I love that vantage point, and it opened up possibilities for the film for me.”

The film premiered at the Chicago International Film Festival in October and since has played some LGBTQ festivals. Moss admits it has been fun to see the universally strong reaction “Mayor Pete” has been receiving.

Moss, who made last year’s acclaimed documentary, “Boys State,” and was also a producer of “Gay Chorus Deep South,” doesn’t shy away from showing some of the homophobia the candidate faced.

“I think their identities are as gay men,” he said. “They’ve had different lived experiences. Pete was closeted for much more of his life, and Chasten was out at a much earlier age. They bring those lived-in experiences to their relationships and their political identities. It all gets played out in this story in different ways. Chasten also articulates the fact that Pete is not running to be the president of gay America, but his identity is a core part of who he is.”

Buttigieg dropped out of the presidential race in March of 2020 and supported now President Joe Biden. Buttigieg was later named Secretary of Transportation under the Biden administration.

Earlier this year the couple announced that they had become parents to fraternal twins. Moss didn’t know about their desires to have children until it comes up in the film. “They had wanted to be parents at the time,” Moss said, “and were exploring the process, but Chasten is cautioned to not talk about it too publicly.”

Editor’s note: This article was edited on November 8. The original article claimed Pete Buttigieg was the first openly gay presidential candidate. This distinction belongs to Fred Karger, who ran in the 2012 GOP presidential primaries.