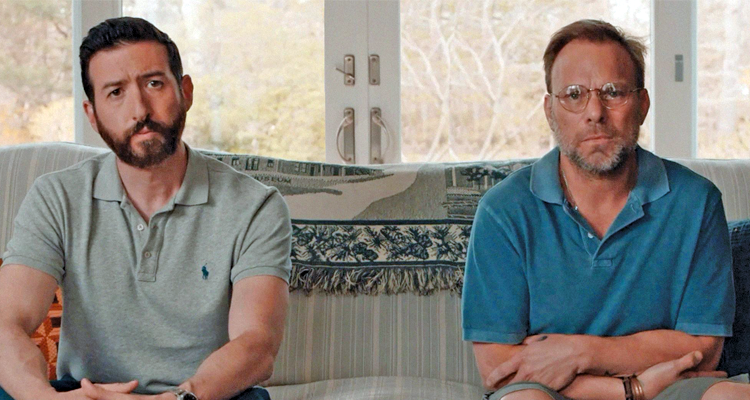 “Give or Take” / Publicity photos

New Film, ‘Give or Take’ Explores Gay Themes; Out Performer Plays Central Role in ‘The Barber of Seville’

Prolific actor Norbert Leo Butz has won two Tony Awards for Best Actor in a Musical, for “Dirty Rotten Scoundrels” and “Catch Me if You Can.” He has also been seen on television in the Emmy Award-winning “Bloodline,” co-starring Kyle Chandler, Ben Mendelsohn, Sam Shepard, Linda Cardellini and Sissy Spacek. It was while working on that series that he received the script for “Give or Take,” his newest film.

In it, Martin (Jamie Effros) returns home to Cape Cod after the death of his father, Kenneth, and discovers that his father was in a relationship with Ted (Butz). The two men have to navigate a difficult situation and future as they prepare for a funeral and the selling of a home.

Butz was looking for something lighter to do after “Bloodline” and loved the script by Paul Riccio and Effros right away.

“It moved me and made me laugh,” he told Georgia Voice. “It was a very honest depiction of grief, of what everybody has to reckon with at some point. Ted has lost his partner of several years. While they were not married, they had what they thought was a common law marriage.”

“It is interspersed with such gentle humor that it keeps it from being disgustingly sweet or melodramatic or too heavy-handed,” he said. “The characters were generous hearted, even though they are flawed and some of them have some big character defects.”

The character of Kenneth (seen only in photos) has had a full life identifying as a straight man. After his wife passes away, in his 60s he falls in love with a man andre-identifies as a gay man.

Because of COVID-19, Butz saw the film for the first time a few weeks ago at the film’s premiere. He’s excited that, thanks to streaming, the film will reach a wider audience.

After growing up in Mableton and moving away to pursue his professional performing career, Joseph Lattanzi is back in the area again, now living in Atlanta. He stars this week in the Atlanta Opera’s “The Barber of Seville.”

“It’s a romantic comedy,” Lattanzi said. “My character is the man about town. He has his hands in everything and is helping his friend, the count, woo Rosina. It’s silly. The plot of these Italian operas exists just to have great music.”

Lattanzi loves the Atlanta Opera and when there is the opportunity to stay in town and do a show there, he jumps at the opportunity. Before this he was in “Pagliacci” under the Opera’s Big Tent. “Seville” is right in his wheelhouse.

“I love the blood and guts of other operas, but what I love about Italian opera is that it’s fun and fast paced,” he said.

He also feels “Seville” has longevity: “Rossini wrote very accessible music. This opera, this overture has been used a lot all over commercials and pop culture.”

The Atlanta Opera gig is Lattanzi’s first playing the central character. He also appeared in the world premiere production of the opera “Fellow Travelers” in 2016, which dealt with the McCarthy era “lavender scare,” when gays and lesbians were fired from government jobs. He created the role of Hawkins Fuller, who fell in love with another man, and has performed it many times. As a gay man, it was particularly important to him.

“These two men find, against the backdrop in time, it’s not possible to have the love and a relationship that we are able to have today.”

In high school, the performer always thought he wanted to get out of the South and never come back. Yet his family is here and he’s back and happy, especially seeing how the city is changing and growing.

“Give or Take” is now available on DVD and digital/VOD

“The Barber of Seville”