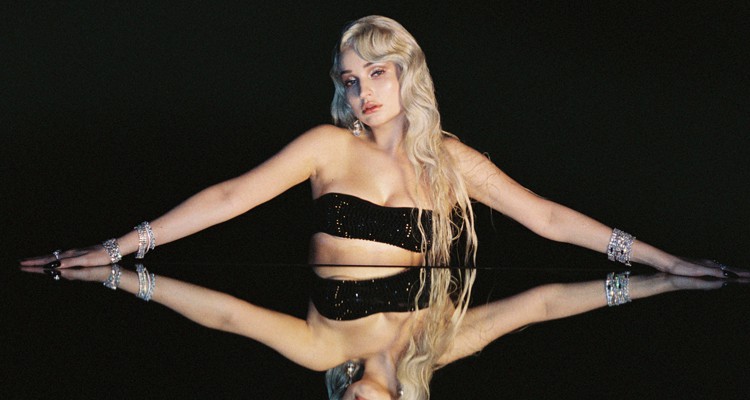 At the age of 27, German singer-songwriter Kim Petras has racked in more than
85 million online music streams with hits like “Turn Off The Light,” and “Heart To Break.” Now, the openly transgender musician is taking on the world with “The Clarity Tour,” making a pit-stop right here in Atlanta, Georgia on Nov. 12, 8pm at Tabernacle. We caught up with the EDM, electropop princess before she hits the stage to talk about her success in music, and being a voice for the trans community!

Firstly, we’re excited to have you visit our wonderful city! Many of our readers are excited about your stop at Tabernacle! What’s it like being on this whirlwind tour and visiting so many different cities? You’ve probably gotten used to the
non-stop life of a singer, right?

“Yeah! It’s amazing. I love it! I’ve always wanted to have this life and I think I’ve worked really hard to get to the point where I can work every single day. It’s also been a learning process. I’ve had to learn how to stay healthy and how to be 100 percent when it comes to my vocals every single night, but it’s been amazing. I’m just so lucky that I get to do these shows and sell out these venues. I’m really excited.”

This issue you’ll be featured in focuses on women and the trans community, and making their voices heard. We’ve read that you don’t want to be known as a “transgender artist,” but that you want your music to be relatable to everyone. Why do you feel like people have focused so much on your identity and not your music?

“I don’t mind if I’m labelled as a transgender artist, but I don’t want to be known for just being transgender. There’s more to me than that. I want to be known for being a good artist. When it comes to my music, I think I’m the guinea pig. I’m one of the first transgender women to do what I’m doing in the mainstream, so I’m going to make mistakes and I’m going to be figuring out how to do as I go. A lot of people only really want to talk to me about being transgender and they don’t see me as anything more, so I’ve accepted that it’s going to be difficult. It’s been really hard to balance. If I don’t talk about my identity, I’m not advocating for my community. If I do talk about it, I’m using it to get ahead. It’s been hard. I feel like no matter what I say people are going to be mad at me, so I’ve kind of just accepted that.”

Has your journey through the music industry been a struggle because you’re transgender or have people been just as welcoming to work with you and get your music out to the public?

“Creative people have been really welcoming! Producers, songwriters, and directors have been like, “oh, that’s rad! We don’t care!” A lot of people didn’t even know ahead of time that I was transgender. I didn’t bring it up or introduce myself that way, so usually everything was totally normal. It became a big topic when I spoke with major labels. People would discuss it a lot. They were like “how do we market this?” or “how do we not market this?” Some people were like “can a transgender person only be a niche artist?” or “can somebody be mainstream and transgender?” I used to get that a lot. So, on the creative side, it has been amazing but on the corporate side it has been really disheartening.”

Going back to your childhood, was it difficult coming out as transgender in your home country of Germany? Can you tell us how being raised in Germany as a transgender person shaped you into who you are today?

“For my own personal experience, I was just always kind of like, “hey, I’m a girl” and made my parents kind of help me get where I needed to go. At an early age, I think at the age of five, I told them that I didn’t want to live as a boy. They told me about transitioning being a possibility and so I did. It was really difficult. At the time – and this was over ten years ago – people were really close minded and I was called crazy by a lot of doctors and psychologists. It was really hard to make it happen, but I’ve talked about this a lot and don’t want to repeat myself too much. There are lots of videos out there of me talking about my journey that you can look up!”

What made you want to move to the United States and pursue a career in music?

“I don’t think I had a choice. Those I tried to work with in Germany didn’t really understand my music and didn’t really get pop. It’s not as big there and there aren’t as many people making pop in Germany as there are over here. I’ve been a songwriter since I was 14. I used to write songs in my bedroom and worked really, really hard every single day to improve. I just knew that I had to save up money from waitressing, go to LA, and really go for it or it was never going to happen because that’s where all the songwriting is. I really feel like I went through pop school. I’ve been in every single studio and collaborated with everyone I could. I learned a lot and became a great writer because of my move to LA, I think. I just always knew that was the path I had to go.”

What was the reception like when you moved to the US and started creating music?

“It was the first time people understood what I was doing. It was really cool that those people got that I just wanted to make pop music. A lot more doors opened for me once I moved to the U.S. and once I met with writers and creative people there, because they just understood what I was trying to do.”

What do you say to young girls or boys out there looking to be singers or actors, but struggling with their identities? How do you think your story can help them?

“I would say that, most of the time, good things happen when you really embrace that you’re unique. Just trust in yourself and work on yourself and know that you’re a good person. I think we’re living in a time where people who are different are finally getting seen. I think it’s important to find yourself and not rush into anything, but also know that nobody is fully confident in themselves all the time. I think that’s a feeling I’ve grown up with. Like, “does everyone feel this insecure?” Just know that you’re okay the way you are and the more you embrace yourself and the more you focus on your uniqueness, rather than changing yourself to try to fit in, the better artist you can become.”

What kind of voice to you feel like you’ve been to the transgender community? With actors like Angelica Ross from POSE who’ve created a dialogue regarding workplace protections for trans people, how have you used your platform to make sure trans people get the same rights and treatment as everyone else?

Who are your biggest idols in the music industry or just in general?

“I really looked up to Karl Lagerfeld. I really love directors. I get really inspired watching interviews with Tarantino, or Steven Spielberg, or Robert Rodriguez, or Eli Roth. I feel like I get really inspired by different kinds of creatives inside and outside of music, but my all-time favorites are Freddie Mercury, Marilyn Manson … I love Daft Punk. I’m obsessed with Post Malone. Lana Del Rey is probably my favorite songwriter of all time. I love Marina and the Diamonds. I love Madonna. So, across the board, I just love great art.”

You’re making a stop in Atlanta as part of your Clarity Tour. What can we expect from your show? Anything special planned?

“I’m really excited to come back to Atlanta! It’s been a little bit. I mean, this show feels like a real pop show now. It’s very different from my last tour. It’s a very different vision, there are different outfits, there’s more staging, the songs are different … I’ve released a lot of new music since my last tour that I haven’t really gotten the chance to perform. It’s just a completely different show, honestly. I love it! It’s my favorite one I’ve done.”