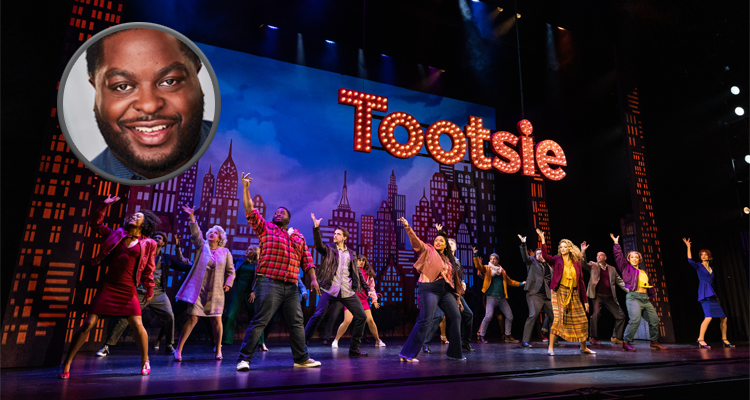 It’s regarded as one of the great movie comedies of all time. “Tootsie” — based on the Oscar-winning film — is now a Tony Award-winning musical. It debuts in the ATL next week via Broadway in Atlanta.

The musical charts how Michael Dorsey — an actor who butts heads with producers and has a hard time getting cast — disguises himself as a woman in order to get a role on a soap opera. Jared David Michael Grant stars as Jeff Slater, Michael’s roommate. He’s been with the musical since September and saw the film right before he started rehearsals to get the gist of what he’d be walking into.

“It was funny,” he told Georgia Voice. “I didn’t know that Bill Murray was the character I was playing.”

According to the performer, the story is pretty much the same as the movie with a few changes.

“The women characters have stronger opinions and storylines and are not just dependent on the men,” he said. “They are more women in power focused which is very nice. I love the film but some of the decisions that [the writers] wrote were of the time. [The play is] more focused on the whole situation of what Michael is doing instead of the physical comedy of seeing him in a dress or a bra.”

Jeff is an unsuccessful writer whose career is not going well. He has not been motivated by anything.

“He is a take-it-as-it-goes guy who figures he will keep working at a restaurant or bar as part of his normal routine,” Grant said of his character. “He is kind of the words-of-wisdom voice of the audience, very opinionated and very forward. He loves Michael but also says, ‘Michael, what are you doing? It makes no sense — you have to cut it out because this is not a good look.’ But what Michael is doing does wake up Jeff’s creative inspiration.”

The musical made its Broadway debut in 2019 and won Tonys for lead actor Santino Fontana and for Robert Horn’s book. Yet there was some controversy over what some activists labeled as a transphobic premise.

“We have not heard any more about it,” Grant said. “What was nice is that we had the book writer Robert Horn and we worked with GLAAD to go through the script and work out the issues that were being brought up by the trans community so we’re not making fun of the trans community in any way and focusing on the situation of the story and Michael doing what he’s doing.” This is the actor’s first touring show, and he has adapted well to the fast pace.

“I have always wanted to see different states I’ve never been to and see the way people live,” he said. “I am a big chicken wing fanatic, and it’s nice to check out each city’s wings.”

While COVID-19 has thrown a wrench into many live performances, the “Tootsie” cast has been able to continue performing. “Usually we test every other day,” Grant says. “At the beginning of rehearsals everyone was masked so we didn’t know what the bottom of their faces looked like. COVID has changed things. We have not been able to go out and do group outings. It’s a medium sort of isolation situation.” The tour has had to get more understudies because of the pandemic, but Grant has not had to call in sick yet.

His run with this show lasts until early June. The actor, whose home base is Chicago, has also been seen in Showtime’s “The Chi.”

As an out performer, he gravitates toward roles that speak to him. He does feel that it’s a better time now for LGBTQ roles. “There are not as many stereotypical gay characters,” he said.

One aspect that attracted him to “Tootsie” is the humor.

“Usually, the shows I do are so serious, but I thought it would be nice to do a comedy, especially after the pandemic. People need to laugh now, and I love hearing the audience react.”