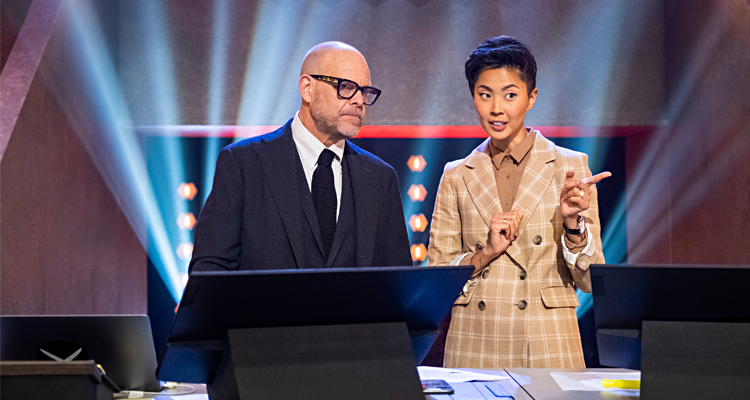 Netflix’s “Iron Chef: Quest for an Iron Legend” isn’t just an addictive reality cooking competition series; it also boasts two out women in its cast. Kristen Kish is one of the hosts alongside Alton Brown, and Dominique Crenn is one of the titular chefs.

In 2013, during the 10th season of “Top Chef,” Kish became the first woman of color to win the Bravo TV series. Soon after, she came out as a gay woman and opened her first restaurant in Austin, Texas. She jumped at the chance to co-host “Iron Chef: Quest for an Iron Legend.”

“It happened relatively quickly,” she told Georgia Voice. “I am sure there were plenty of discussions behind the scenes that I am not privy to, but from my perspective, it all happened within three weeks or so. I got a call saying the ‘Iron Chef’ producers were interested in talking to me and then they called back. That was it.”

The competition — divided into eight 45-minute episodes — is called the toughest culinary challenge a chef will face.

“First off, it’s the caliber of chefs you are competing against,” Kish said. “Your competitor is at a level that is established in a lot of different ways. That, on top of the clock, is very daunting. Sixty minutes is not a long time to create four or five courses. You’re also on an iconic show and it carries a lot of weight to it. That is another layer of pressure.”

“It’s always a wonderful thing,” she said. “Representation, as we all know, matters. The best part of the casting is that it really does touch on so many people — storytelling, cultures, points of view through food, sexuality. All of these things create one dynamic round family.”

She said she never thought of being a trailblazer until other people started talking about it.

“I certainly knew I was the second woman to win, and the first woman of color, and the first queer woman, and I think it’s important to acknowledge,” she said. “But I’m also just a chef who won the show.”

The new Amazon film, “Anything’s Possible,” marks the directorial debut of Billy Porter and stars trans performer Eva Reign as Kelsa, a high school girl. When classmate Kahl (Abubakr Ali) develops a crush on her, the two have to navigate a new dating world.

According to Reign, Kelsa is a Black trans girl about to graduate from high school who is living in Pittsburgh.

“She loves fashion, beauty and she also had a deep love for animals,” Reign told Georgia Voice. “She hopes to pursue a career in science. She meets Kahl, a goofball who starts to fall for her. Through this loving bond they grow as humans and learn anything’s possible.”

Their relationship is not easy.

“There are a lot of bigots out there who don’t want to see trans people happy and in love,” Reign said. “The existence of trans people in the world challenges how some people view the world and how they can understand the world. Also, when it comes to a cisgender straight man loving a trans woman, that turns people’s heads. They don’t understand what that can look like. That has always existed. This film shows what that can look like in a more loving, mutual, ethical way.”

Reign did not see trans narratives growing up, but did see the likes of Laverne Cox and Janet Mock, which she calls a privilege.

“I would also see the women of ‘Pose’ do the amazing things they have done,” she said. “So, I am privileged. I came up at the crux of all this change. I have gone through some rough patches, but I have seen shifts in media during that time. I do feel a film such as this would have made a difference when I was 12 or 13.”

She couldn’t say enough positive things about working with Porter.

“It was amazing,” Reign said. “He brings so much energy to the set every day, making everyone feel empowered. That is what his artistry is about. He wants to be the change that he needed to see when he was growing up. I feel honored to learn from him.”

“Iron Chef: Quest for an Iron Legend” is now airing on Netflix.