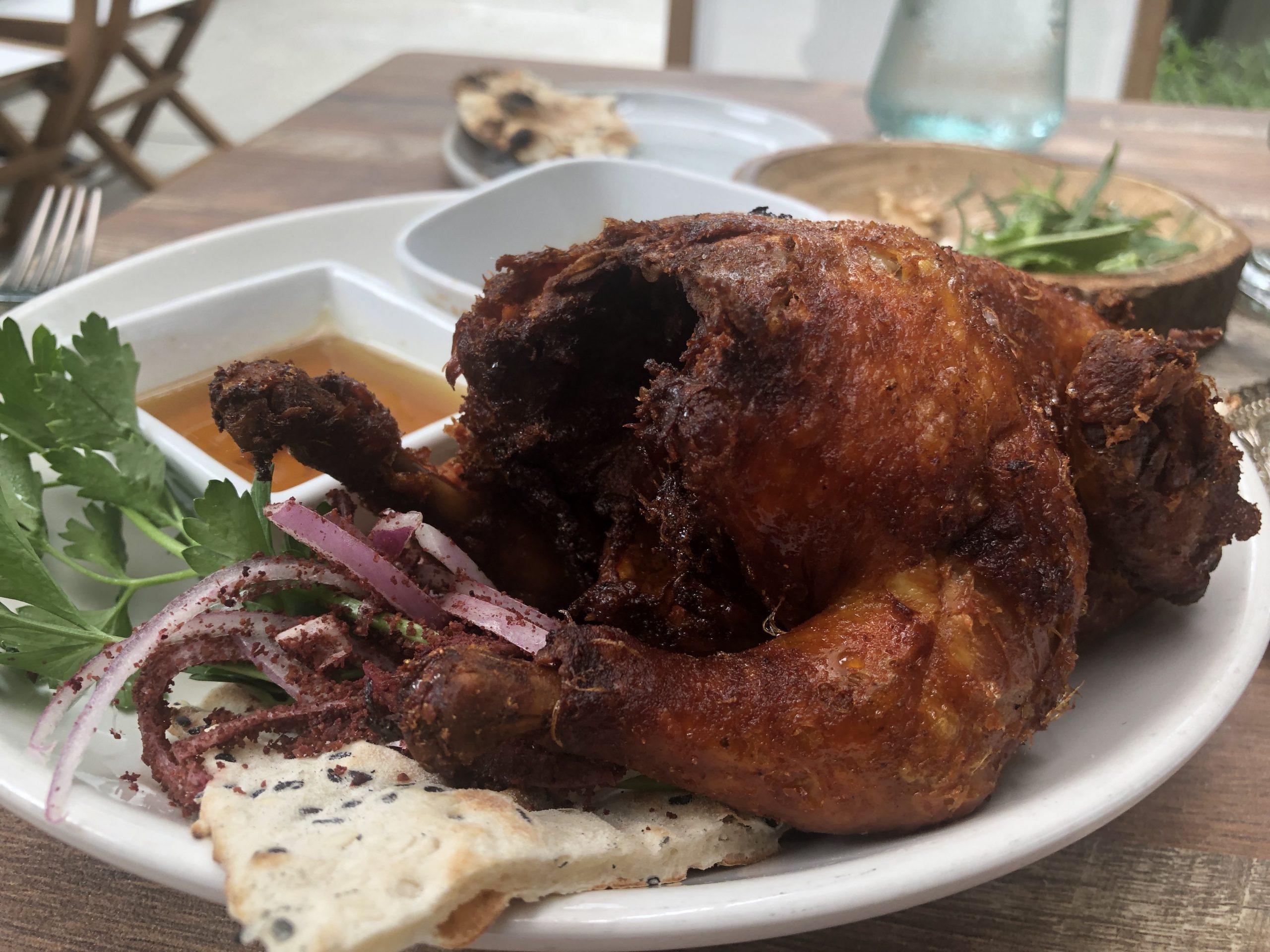 The Trumpenstein Pandemic continues to stall the city’s restaurants, but it’s my impression that many are trying to enlarge outdoor dining and rework interior space so that someone’s weak sneeze doesn’t catapult us to the emergency room. It’s slow going, but it’s also a promising example of how things get better when we bring an iota of compassion into our black hearts. You don’t want to become the next Karen, right?

My latest outdoor dining occurred at Delbar, a new Persian (Iranian) restaurant off North Highland Avenue in the space occupied by the short-lived Daily Tavern. The owner/chef is Fares Kargar, who left Iran for Turkey when he was 17 and soon landed in Atlanta. His original fascination was architecture, but exposure to the restaurant business inspired him to study hospitality at Georgia State University. He got a job at Rumi’s Kitchen and that clearly inspired him to open Delbar.

The new restaurant is, um, roomy enough to provide social distancing. That’s a good thing, because the patio is small. During my visit, I had no trouble finding a table, but a sudden 10-minute torrent of rain forced me inside, where I confess my head spun as I monitored every move by staff and customers. Honestly, the entire staff was in masks and the number of diners was small. Like most restaurants, takeout is big business for Delbar.

After Vietnamese cuisine, Middle Eastern is my favorite. I’m lucky to have spent time in Paris and, after a few days there, it’s the city’s countless Middle Eastern restaurants that most attract me. As I’ve written before, the most magical meal of my life was a Moroccan rose-petal tagine at a restaurant there. Persian food, which also incorporates rose water in many recipes, can be profoundly sensual. A stew may contain vegetables, fruits, nuts, meats, and complex sauces, served with an elaborate rice dish. Delbar starts all meals with a complimentary mazze plate. You will want to fold the feta-like cheese into the charred bread along with the fresh mint and tarragon. Meanwhile, nibble on radishes and walnuts. It’s seriously one of those real-food moments. There are plenty of small plates to share with others, like prawns flavored with Persian dried lime, sour orange, herbs, and labneh (Levantine yogurt). You can also order five spreads, including hummus and two more labneh concoctions.

My entrée was an absurdly decadent Cornish hen that was coated in saffron and deep-fried in butter. The diner’s chore is to tear apart the hen, drag the pieces through yet another bath of butter, and then douse it with pomegranate sauce. I love every ingredient in this dish, but, in all honesty, the bird’s breast was extremely dry. I took most of it home, where I tore up the flesh and soaked it in the butter for at least an hour. Then I heaped the meat on rice and covered that in pomegranate sauce. Voila! That stuff was juicy-good. That rice I used was the restaurant’s traditional adas polo, a huge plate of saffron basmati rice with lentils and raisins topped with fried onions. Typically the dish is a bit crispy, but Delbar’s was not.

There are, overall, eight rice and vegetable dishes, plus 11 meats — fish, beef, chicken, and lamb, including shawarma. Service is stellar and I probably annoyed my server with too much talking about the Farsi language and the wholly incorrect, often primitive depiction of Tehran by American media. It is actually among the globe’s most cosmopolitan cities, where the most decadent classmate of my lifetime lives. By the way, roughly translated, “Delbar” means “sweetheart.” Go get you some.