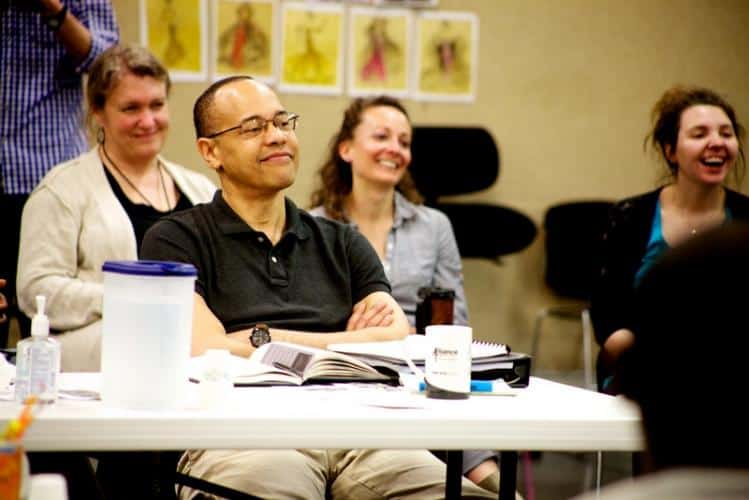 For actor Tyrone Mitchell Henderson, “Blues for an Alabama Sky” has been one of the highlights of a lengthy acting career. The Alliance Theatre’s 20th anniversary production of the play, written by local legend Pearl Cleage, closes out the company’s 2014-2015 season. It’s the story of the Harlem Renaissance and the cavalcade of African-American artists working around at the time who were eventually affected by the Great Depression.

Henderson, who is gay, plays Guy, a gay character in the drama. The performer lives in Weehawken, New Jersey, and has done TV and film. His main gigs, however, have been on the stage at regional theaters across the country, including Berkeley, where he worked in playwright Tony Kushner’s epic “The Intelligent Homosexual’s Guide to Capitalism and Socialism with a Key to the Scriptures.” We caught up with the actor as he and the cast were prepping to open the “Blues” remount.

This is my third show here. I did “Angels in America” there, directed by (former Alliance artistic director) Kenny Leon. I believe it was one of the first regional theater productions of Parts One and Two it while it was running on Broadway. Tony Kushner had a chance to come check it out, which was awesome. And then eight years ago I did “Intimate Apparel” at the Alliance, which (current Alliance Theatre artistic director) Susan Booth directed.

This isn’t your first time in the role of Guy, correct?
I played Guy in a Huntington, Massachusetts production that Kenny directed after the original Atlanta production. Phylicia Rashād and Deidrie Henry were in it in Atlanta and I came up for it. I had just finished doing “Angels in America” with Kenny, and he asked me to do it there. Crystal Fox, who stars as Angel in this Atlanta production, was in it and I’ve known her for 20 years. When it came time to do an anniversary of it my name came into the mix. They called and I said yes.

Tell us about your character, Guy.
He is a costume designer. He and Angel grew up in Savannah and both wound up at a house of ill repute. They met there, saved money and moved to Harlem. He is trying to make his way to Paris, trying to reconnect with Josephine Baker, a few years his junior. He wants to design for her.

As a gay man, what does the character mean to you?
Primarily he has big dreams and he is headed toward them. He is someone who does not live inside a box. He is his own person. I connect with him. He is unafraid and unapologetic.

Why does the play hold up so well?
When I first think of it, I think of it from an educational standpoint, because so little of the Harlem Renaissance is available to students today. But for people who already know the Harlem Renaissance, they know it was a vibrant period. A majority of Harlemites were on the move from the South to be amongst like-minded people. It was a time in African-American history that everyone has a great memory of. The show brings it back and embraces the artistic lives of those in that period.

What is it like collaborating with Pearl Cleage?
I feel she is the heart of this. Her writing is so naturalistic. She drops pearls of wisdom. She is open and valuable. She takes it all in and brings a wonderful atmosphere.

What’s next for you?
I recently started a theater company, Quick Silver Theater Company, and we have a production in the fall. After I finish here, I head back home and work on that. That’s one of the things [about theater]—you can get a standing ovation on a Sunday and then Monday, who knows what the world has open for you? Besides that, I’ll be auditioning and seeing what comes next.

“Blues for an Alabama Sky”
Alliance Theatre
Through May 10
www.alliancetheatre.com