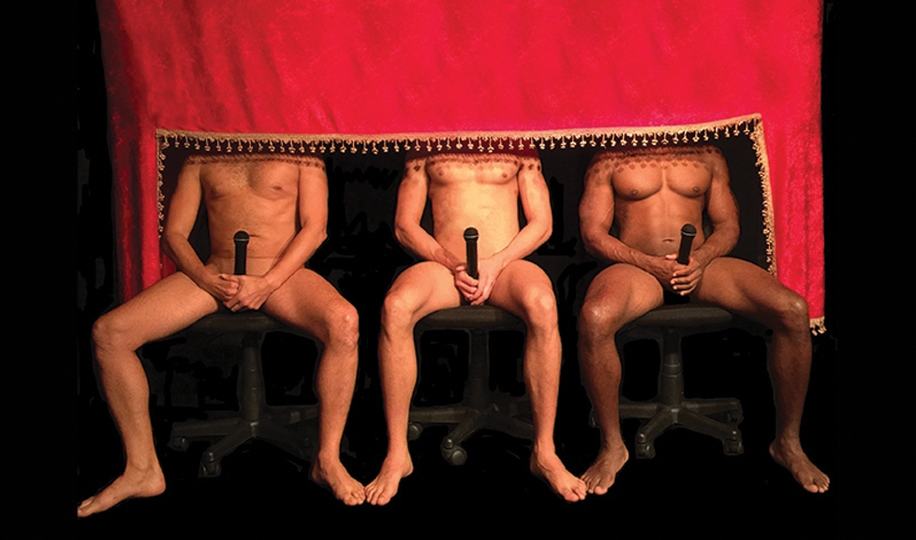 Over the last few decades, openly gay playwright, actor and director Ronnie Larsen has carved out a niche for himself with his gay-themed, often sexually frank shows. Just as his production of “Happy Endings” closes in the ATL, his new one “The Penis Talk Show” is about to open at 7 Stages. As you can imagine, it’s one to leave the kids at home for.

Ironically, the show had its origins in a sex club in Van Nuys, California, where a woman wanted people to stare at her vagina.

“We put her in a box and people started staring and asking her vagina questions,” Larsen recalled.

Soon, he got the idea to do a Vagina Talk Show with women onstage naked (with their faces covered by a curtain) in L.A. and allowing audience members to query them and their bodies. With that a success, he turned to a male version and – hence – “The Penis Talk Show” was born.

Although Larsen realizes it may sound gimmicky, he says it’s an interesting, educational evening, one that is different each show. He serves as the host, talks to three naked guys onstage briefly and then lets them answer questions from the audience.

“The audience wants to talk and want to reveal parts of their own life,” he said. “You learn about the strangers onstage as well as the strangers in the audience and the people they came with. It becomes very revelatory. People talk and ask about anything and the guys feels very free to do the same. It’s very sexual.”

His audience members, he said, are a mixture of both men and women and gay and straight crowds. The conversations lead down unpredictable paths.

“One women asked a guy why there was no female version of a glory hole,” Larsen said.

And then there was a time another patron mentioned that a certain male bodily fluid was good for her eyelashes – and wanted to know how to make said fluid thicker.

“A lot of changed here – I don’t recognize a lot of it,” Larsen said.

He uses a combination of different guys for every show, but it can be hard to find talent every night. As of press time, Larsen was still in the process of lining up actors for the Atlanta run. In the Fort Lauderdale gig, all the actors were gay, but Larsen likes to have a mixture of sexual orientations and races. Besides being willing to drop trou, his subjects need to have fun and go with the flow.

“The show would not be great if the guys didn’t like talking and participating,” he said. “It should not be rehearsed either. I don’t tell them what to say.”