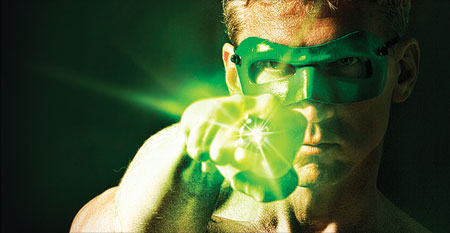 Atlanta artist Philip Bonneau is so addicted to superheroes and villains that he has found a way to incorporate them into his professional life. His new exhibit, “Heroes + Villains #2,” opens at the MISTER Community Center next week for a month-long run.

Art and photography have always been part of Bonneau’s life. His mother was an artist and Bonneau, who is gay and has lived in Georgia his whole life, studied at the Savannah College of Art & Design.

Ultimately, he got a degree in graphic design, but found that photography isn’t something he can or wants to get out of his system. Last May, he did some soul searching and dabbled in photography over the summer.

“I am a graphic designer by day but I have found time to do photography by night and on the weekends,” he says. “I am doing stuff I never thought I’d have a career in doing.”

Bonneau has lived in Atlanta for the last six years and got his love for superheroes and villains from his grandfather, who he says is the definition of an adult who never really grew up.

“He got me addicted at an early age,” Bonneau says.

His favorite is The Incredible Hulk, he says, because he loves the whole Dr. Jekyll/Mr. Hyde aspect of the particular superhero.

To get ready for an upcoming exhibit, he shot Wonder Woman but with a twist – it’s a drag version of the iconic superhero.

“Not every boy wants to be Batman or Superman; some boys want to be Wonder Woman,” he laughs.

Bonneau’s first photography exhibition was called “Beautiful Layered Lies,” shown at Pedini of Atlanta in 2011. It was a narrative show – as well as a way to get over a break-up in his life.

“I was getting rid of things in my life emotionally,” he says. “It was a cathartic release, turning something negative into a positive, learning that you are never alone.”

Proceeds from that exhibition went to the Atlanta Cotillion, which raises money for AID Atlanta.

“I had done graphic work for the Atlanta Cotillion for the last four years,” he says. “I love being able to do that as an artist.”

Bonneau’s second show was introduced last October at MISTER, the gay men’s community center that is part of Positive Impact. While being involved with the Cotillion, he was introduced to Chandler Bearden of MISTER. The name stands for Men’s Information Services: Testing Empowerment Resources, and Bonneau says he is thrilled to be able to support that mission.

“I had been following what was going on in the community and knew about MISTER,” he says. “They asked me about being the first artist in their new space. I’ve never been able to donate money, but I do like to introduce people to things like MISTER and all they are doing.”

It was a one month show, complete with 15 pieces. That was his first Heroes and Villains piece, which he always envisioned as a four part series.

Last year’s segment featured Marvel Comics, and this year it is D.C. characters. On display will be the likes of Superman, Lex Luthor, Batman, Robin, Catwoman, Joker, Captain Marvel, Clayface, Aquaman, Green Lantern, Wonder Woman, The Shadow, Zorro, The Flash, The Sandman, The Blank, Alfred the Butler and more. Prints will be available for purchase at the opening.

Drag will be the underlying theme for the third installment, which Bonneau hopes to have at the end of summer. The fourth instalment has no date set, but it will black and white, featuring superheroes 70 years of age and older as a tribute to his grandfather.

He feels that being gay has shaped his sensibility as an artist but hardly defines it.

“I have been called a gay artist,” he says. “I don’t choose gay themes, but I do admit that I like the male form. I like to try and break barriers. I am definitely trying to change the way gay art is viewed and breaking all the stereotypes.”

Superheroes are extremely popular in the LGBT community, Bonneau says.

“With comic books and superheroes, they all have secret identities, and there are so many gay connotations,” he says. “We can all understand trying to fit in.”

Top photo: ‘With comic books and superheroes, they all have secret identities, and there are so many gay connotations,” says photographer Philip Bonneau, whose new exhibit opens April 7. ‘We can all understand trying to fit in.’ (courtesy photo)