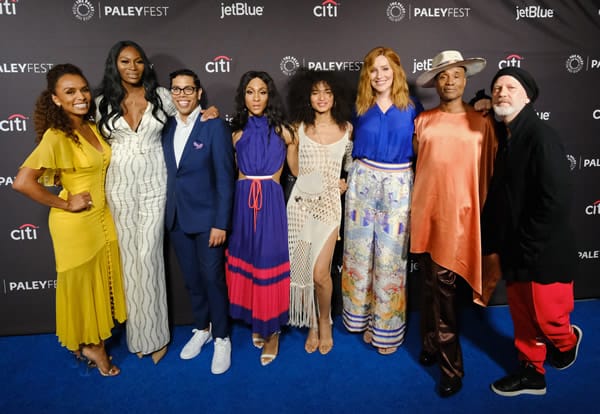 Much of the power of FX’s landmark series “Pose” comes from its factual basis. Although fictional, much of what is seen happened in 1980s New York in black and Latinx gay culture.

Making its debut during PaleyFest, Executive Producer Ryan Murphy moderated a panel, acknowledging the blend between fiction and reality.

“One of the beautiful things about this show is that we can say it really did happen and we really do remember,” he said. “We don’t have a large written history and archive. There have been so many deaths and so much that has been lost about this period. Writing about AIDS and HIV is such a powerful thing to do.”

In addition to Murphy, Dominique Jackson was at the panel, along with Indya Moore, Billy Porter, MJ Rodriguez, co-Executive Producer Janet Mock, writer/producer Our Lady J and co-Creator/Producer, Steven Canals.

The groundbreaking “Pose” has the largest cast of trans actors and characters ever on a scripted network. For season two, the provocative series will jump ahead to 1990, on the very day that Madonna’s “blockbuster hit, “Vogue” is released, Murphy said.

During the discussion, fans at the Dolby Theatre were thrilled to hear Murphy announce that the lovely Rodriguez (who plays Blanca in the series) and Porter will be sharing a number of pivotal scenes with the Grammy- and Tony-winning Broadway icon Patti LuPone.

“We’ve come up with this great role for Patti LuPone. She loves the show and we wrote this part and she said, ‘Yes, I want to do it.’ So she’s coming to play with us in a couple weeks,” Murphy said.

Murphy talked warmly about each cast member getting their role.

“The second Indya Moore walked in the door… game over,” Murphy said. “We knew she was the one. What I didn’t have in me, that she does, is bravery. She instantly used her fame and success as a platform for activism.”

While the characters deal with the epic tragedy of HIV and AIDS, trans writer/producer Our Lady J stressed the importance of focusing on light vs. dark.

“In 2004, I was living in an abandoned building in Brooklyn, and I found out I had HIV. I was at rock bottom. One night, I was going to throw all of my things out of the window. Instead, I went and ran across the Williamsburg Bridge. I had a mantra as I was running. I said, ‘I’m going to survive, I’m going to thrive,’ and that became, ‘I am surviving, I am thriving.’”

Talking about the character, she said, “Blanca pretty much says that, that’s her energy. I knew there was an authenticity in this piece that never existed outside of what I had felt.”

Look for season two to have more of the exquisite chemistry Pray Tell and Blanca have onscreen, which flows even more smoothly due to their relationship offscreen.

“It’s kind of crazy because me and Billy have known each other since I was 19 years old, when I was doing ‘Rent’ in 2011 in New York City,” she said at the Television Critics Press Tour. “And I feel like we just built upon that relationship and it was just easy for us to navigate the whole thing together.”

Added Porter: “We watched this luminous creature walk into the room for ‘Rent,’ and it was like we had never seen the role before. It was as if Angel became a whole new thing. And I didn’t understand, really, what that was. I just knew that it needed to be nurtured, and I knew that I could sort of be of use. I taught her how to work with her train. But, you know, it was wonderful to sort of work in that environment and then, since then, see the evolution of this beautiful lady sort of flower into what she has become.”

The cast is already back in production this week. Season two is expected in June.

In the original pilot script, Porter’s character, Pray Tell, didn’t exist. But once they brought the dynamic actor/singer in to talk to producers, they were so impressed they wrote in his role on the show.