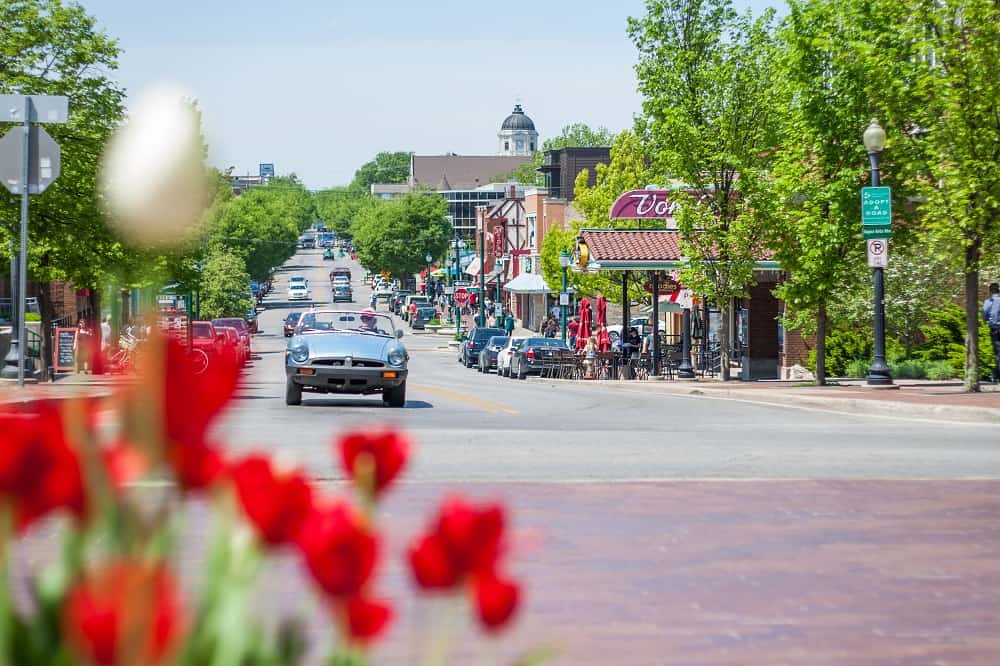 In the heart of Pence country lies a gay oasis that needs to be on everyone’s list of places to visit. Bloomington, Indiana is one of the most welcoming and gay-friendly small cities I have ever traveled to, partially due to Indiana University and the LGBT initiatives they have implemented over the past few decades. This coupled with a bohemian lifestyle among residents makes it a great destination to visit for a weekend getaway.

One of the coolest attractions in the city is the Tibetan Mongolian Buddhist Cultural Center. I would never have known that Bloomington was home to such a rich Tibetan culture but as I would soon discover, the city is extremely diverse in its cultural offerings, especially when it comes to culinary establishments. Downtown is rich in its offering of international restaurants. From Thai to Indian to Burmese cuisine, there is something for everyone.

Upon entering the grounds of the Cultural Center, one is instantly transported to a foreign land. Tibetan Stupas, a Choekor Pagoda and The Kumbum Chamtse Ling Monastery welcome guests as they wander the beautifully manicured property. While there, take the time to meditate and learn about the Buddhist culture.

After dinner, check in to The Graduate Hotel, a fairly new property located in the heart of the city, easily in walking distance to most places of interest. The college-themed décor of the hotel is a bit different and takes some time to get used to – especially if you graduated from college in the early part of the decade – but the hotel chain is catering towards university students and their families, so it works for their target audience. That being said, my room was incredible and featured a huge dining room, living area, walk-in shower and a king size bed that I didn’t want to move from each morning.

The first stop on my trip of LGBT Bloomington was the Rainbow Bakery. Don’t expect any fancy lattes here. Instead, order a drip coffee and one of their delectable doughnuts. I opted for the maple bacon doughnut and it was as delicious as it sounds. The bakery staff is welcoming, and establishment is one of the favorite morning destinations among locals.
The city of Bloomington has enacted a Nondiscrimination Policy which provides all citizens equal opportunity for education, employment, access to public accommodations and housing. This policy is on top of Indiana University’s policy, making Bloomington a very welcoming and safe place for LGBT people to live, work and study.

Not too far from campus is the Bloomington Salt Cave. It’s not actually a cave, but it is the perfect place to unwind. A session includes a relaxing 45-minute stay in a room made up of Himalayan rock salt. The therapy is a proactive way to achieve overall health and wellness through the use of negative ions. Eastern Europeans have been using dry salt therapy for generations and there are now therapeutic salt caves all over the world.

Bloomington is also home to The Kinsey Institute for Sex Research. Named for Dr. Alfred Kinsey, the Institute had two primary goals: to continue the team’s research on human sexual behavior; and to administer research resources, including research materials, a library, case histories, and other related materials. Drs. Alfred Kinsey, Wardell Pomeroy, and Clyde Martin developed the Heterosexual-Homosexual Rating Scale—more commonly known as “The Kinsey Scale,” which showed people did not fit into exclusive heterosexual or homosexual categories. Guests can visit The Kinsey Institute Collections, which encompass print materials, film and video, fine art, artifacts, and photography collected from six continents and spanning more than 2,000 years of human history.

Indiana University also boasts an active LGBTQ+ Alumni Association, who’s goal is to improve the quality of life for LGBTQ+ students, faculty, staff, and alumni of IU on all eight campuses of the university. The organization sponsors educational activities, provides information on activities and events of interest to the IU LGBTQ+ community and award grants to deserving LGBTQ+ students and student organizations.

If you need a break from your culture and history tour of Bloomington, head to Cardinal Spirits, a local distillery and creator of Pride Vodka. While there, order one of their delicious hamburgers, which were cooked to perfection and quite filling. You won’t leave hungry!

In the mood for a drag show? Head to The Back Door, the city’s only official gay bar. I say ‘official’ because many bars in the city are LGBT friendly and some locals mentioned a few others, but The Back Door is the only bar that bills itself as a gay establishment. While there, I had front row seats at their RuPaul’s Drag Race-inspired competition, where they appointed Bloomington’s next drag superstar.

Bloomington is located about an hour outside of Indianapolis, so if you are visiting from the east or west coast, it would probably be easiest to fly in to Indy and rent a car. I love exploring small LGBT-friendly towns and cities and Bloomington definitely didn’t disappoint. It’s surely one of the blue dots in Indiana.

Joey Amato is the publisher of Pride Journeys, a website dedicated to LGBT travel. Joey has spent over a decade in LGBT media and public relations and currently resides in  both Nashville, Tennessee and Indianapolis, Indiana. He can be reached at joey@pridejourneys.com