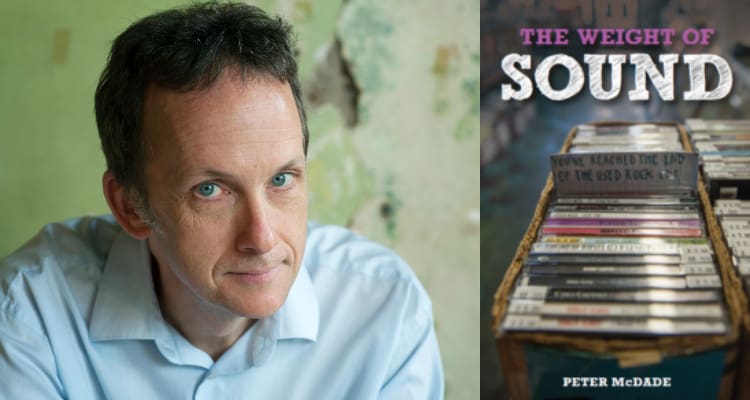 Peter McDade is a man of many talents. He’s a father, a drummer and now, a published author.

The college history professor lives with his husband and two children in Decatur, Georgia, but before settling down, McDade was the drummer for Uncle Green, a well-known ‘90s Athens and Atlanta rock band.

McDade’s debut novel, “The Weight of Sound,” is a fictional retrospective of sorts, telling the tales of his real-life band, years touring on the road and the people he met along the way. And, like any musician-turned-writer, he collaborated with his friends to put together a soundtrack available for download to anyone who buys the book.

Georgia Voice sat down with McDade to get a look inside the cover.

What brought your band to Athens and Atlanta?

We toured around the country and we made some records, but eventually you either have to make a lot of money or stop hopping into a Ford van, so we retired and I went to school and I stayed in Atlanta.

How did you go from drummer to writer?

I had always wanted to be a writer and I’d written really bad short stories and poems in high school and that sort of thing. The thing about being a band on the road is you wind up with a lot of down time. Over the 24-hour day, you’re onstage for one of those hours, so that leaves 23 hours where all you’re really doing is waiting to get back on stage. So a lot of driving, a lot of long trips in the van. I just brought my typewriter and eventually a little laptop along with me. I was always writing stories when we had this down time. It wasn’t anything worthy of getting published — I think of it now as the trainer novels. You have to write x-number of bad books and short stories before you can come up with anything that’s any good.

Without spoiling the plot, can you share with us a little about “The Weight of Sound?”

The book is all fiction except for the stuff that may have happened to me or someone else. It covers 20 years in the lives of three musicians who form a band when they’re in their early 20s. There’s the singer-songwriter, a guitarist and a drummer. The novel follows their various attempts to get their music heard.

The second half of the book deals with people hitting their 30s and 40s and realizing that maybe life isn’t going to go exactly how you planned it, and I think my life played out that way as well. Some of the characters in the book have an easier time dealing with that than others.

You said you’ve written other novels as well. What was it about this one that made you decide to publish it?

Part of it is thinking that for the first time, it seemed good enough. It’s hard to be objective about your own work. It seemed like the first one that really had a life of its own.

At the time of my life, in my 20s, all I was doing was trying to be a big famous rock star. That didn’t work out. In my 30s I spent a lot of time going to college and getting my degrees. In my 40s my husband and I adopted kids and that takes a lot of time. The kids are a little older and I had the time to figure out how to get this out there. Ten years ago, I don’t know that I would’ve had the time.

What was it like to get your hands on the printed book for the first time?

You can’t really explain it. It was fantastic. The first thing I got was, there are these advance reader copies. That wasn’t even the real cover; just a white cover with black text with the title and your name on it. Even if it was just this, I would be thrilled, but then when I finally got a copy of the cover, and the cover was so perfect … it was very satisfying. That’s the understated way of saying it. It was incredibly satisfying to have it come into the world the way you wanted it to be.