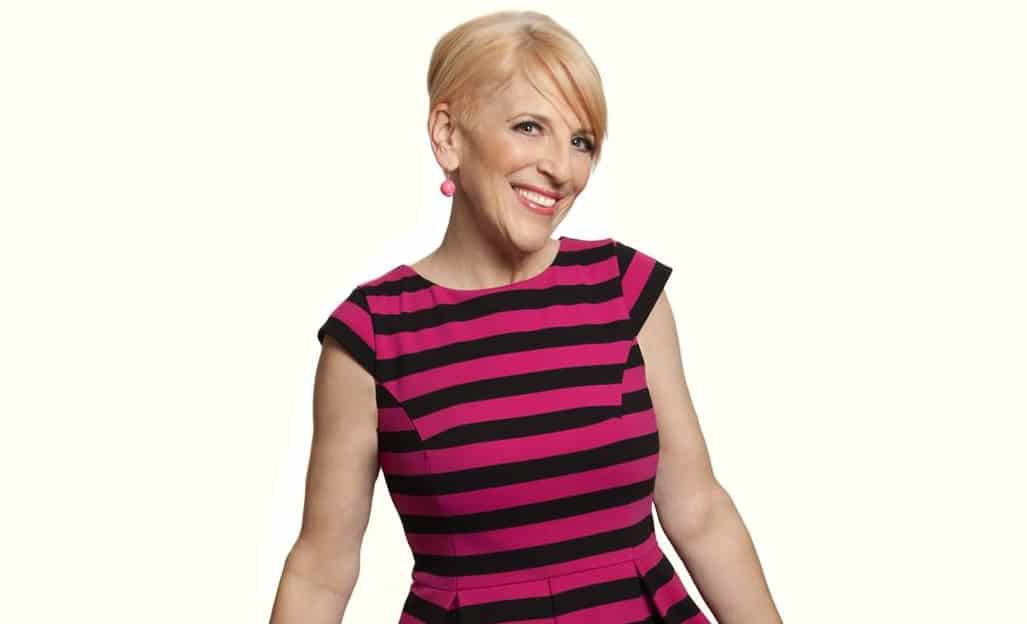 If you know her racy sense of humor, you practically expect Lisa Lampanelli to hurl a slur at you when she calls. Once, she wanted to know “if this was the same cornholer I talked to the last time,” and because she’s Lisa Lampanelli, I took that as a compliment.

Known for her stereotype-mocking comedy routines and hilariously foul roasts (during 2011’s Comedy Central roast of Donald Trump, Lampanelli called the now-president a “bloated, stinky douche”), the 55-year-old Connecticut native acknowledges that her interview persona is either a version of her exaggerated stand-up self or the “real” Lisa.

Hey, Lisa. When did you first feel like you’d made it in the gay community?

It sort of built. I remember being able to make fun of everybody and have them not get mad, except the occasional guy or girl who has no sense of humor. I never felt until recently like the lesbians understood me, but in the last 10 years, which for me is recent, I’m like, “Oh, they get it, they don’t hate me.” Because it used to be, when I started, I had played a few places that lesbians were not happy, honey.

Why do you think it took longer for the lesbians to come around?

Oh, because those bitches used to take themselves too seriously. Couldn’t stand it! I’m like, “Listen!”

They stopped being a bunch of clams with no sense of humor. I mean, honestly. I almost feel like the younger lesbians coming up kind of were like, “This is cool; she doesn’t mean anything she says.” You know, I’m sure there are plenty of people out there who hate my act, and it’s fine, and they’re allowed to, but I can no longer say the lesbians don’t have a sense of humor – they do!

Wanda Sykes was recently booed at one of her shows for calling Donald Trump a “racist, sexist, homophobic president.” She shouted expletives at the audience and gave them the middle finger.

By the way, who’s coming to see her not believing that?

Exactly. How would you have handled Trump hecklers at your show?

I do a whole Trump roast now. I wrote this really funny Trump roast – an updated one for Howard Stern – and I’m doing even more Trump jokes. But I get away with that kind of roast humor all the time. Nobody gets mad, even Trump supporters, if I say something serious about Trump, which I hardly ever do because I don’t talk politics much. Not my thing. Once people booed something and I go, “Oh, shut up. I’m a comedian, not a senator. Shut the fuck up.” And they shut up.

I have no political agenda, and I think they know Wanda really has that strong belief, so maybe that’s why they booed, and it’s fine. But people know I’m not, like, all serious about stuff, so that’s probably why I don’t get a hard time.

You’ve crossed paths with Donald Trump several times. You roasted him on Comedy Central, and you competed in the fifth season of the “Celebrity Apprentice”in 2012. Would you perform at his inauguration?

Absolutely, but only if I could roast him. You understand, there’s a fine line of what I would do. Like, if they asked me to be the White House Correspondents’ Dinner host to perform, I’d be like, “in a second,” because I could reaaaally do a good roast on him and that’s the best, so it would be a way of sticking it to him a little bit and it’d be fine. I would absolutely have a clear conscience about making fun of Trump. I always do.

In 2015, you premiered your first play, “Stuffed.” As someone who has dealt with food issues throughout her life, can we please talk about Oprah’s “I love bread” Weight Watchers campaign?

I am so angry with her. And I’ll tell you why I’m angry with her. First of all, it’s idiotic. It’s the dumbest thing. The biggest joy in her life is bread? Then, bitch, you’ve been preaching wrong for all these years, and you tricked us. Because I thought her biggest joy was helping people; I thought her biggest joy was about self-improvement. I would’ve taken anything except the name of a food, so I was like, “Dude, show us some enlightenment here.” I just can’t stand the un-self-awareness of her putting that out there, but it’s her journey. It’s none of my business. I don’t like to watch that one, ever. I always flip right by it. I’m like, “ack!” I’d rather watch those poor dogs with the one eye from the “Angel” ads and I hate those.

I heard that a drag queen inspired you to move into humorous motivational speaking.

Oh, Coco Peru! The best, best, best. She does this routine, and there is such a real great sort of emotional and spiritual element to it that you don’t see usually with drag queens. When I saw that, I said, “I am definitely going to make sure more of that vulnerability is in my act.” I frickin’ love her. It’s like, you never know what you’re gonna learn when you go and see something, and that was the last thing I expected from a drag performer. I’m so glad I went to that.

I love that you – insult comic – have now become this emblem of empowerment not just for women, but men.

It was funny how gay men really responded to the play, because I think gay men, unfortunately, have just as big of a problem with body image as women do. So, I’m so lucky that they really responded to the show, because, man, who doesn’t have a problem with the way they look? It’s just so hard. It’s nice that they would actually come to me and be like, “I went through that too,” which I’m pretty grateful for.