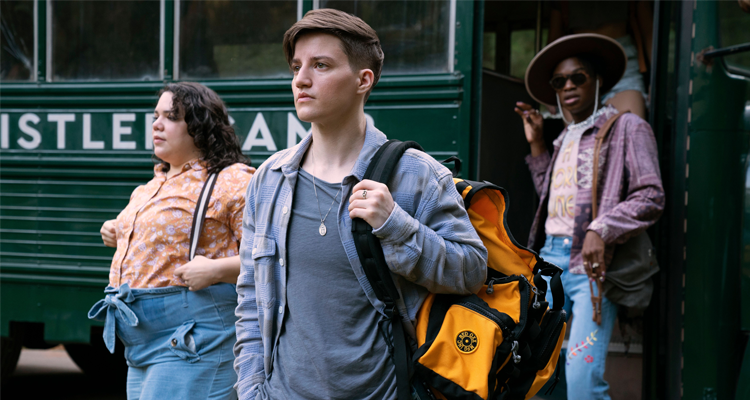 Peacock’s new film, “They/Them,” made in Georgia, is almost like two movies rolled into one — a conversion camp drama and a slasher film. It stars an appealing and talented group of younger performers, in addition to some more established stars.

A group of campers comes to an LGBTQ conversion camp, only to find that an axe murderer is on the loose. Kevin Bacon and Carrie Preston — who hails from Macon, Georgia — star as Owen and Cora Whistler, who run the camp, and Anna Chlumsky plays a new nurse. “They/Them” is directed by John Logan, who has written films such as “Skyfall” and “Gladiator.” Filming took place at Camp Rutledge, just outside Covington.

“They are a creative and independent person who clearly is very traumatized by something and they come to this camp as part of a deal they have made with their parents,” Germaine told Georgia Voice. “Basically, they are on the outs with the parents, and they really just want to go off and live their life and not be connected to all the dysfunction in their past. Their parents are [saying] if you go to this camp and it does not work, we’ll get out of the way and make sure you can legally emancipate yourself. They are sending Jordan to this camp with the intention of Jordan changing their mind about their gender identity, which is not going to happen.”

For Darwin del Fabro, who plays Gabriel Hernandez, the movie was a celebration of uniqueness.

“John was so open to bring part of ourselves to this movie,” del Fabro said. “As an actor just starting here in America, having those artists willing to celebrate who you are is very moving to me.”

Austin Crute, who was born in Norcross, stars as camper Tony. He feels LGBTQ representation is vital and that this project offers that.

“These characters have layers that I don’t think we’ve seen from LGBTQ representation in any horror film or any media,” he said. “You see it sometimes, this focus, in front of the camera, in back of the camera, people consulting the production, the people executive producing. It’s like there is a thoroughness you probably don’t get other places.”

He likes that the project allowed him to stretch a bit.

“Growing up in Georgia I did not have all of that space to express myself,” Crute said. “I am a pastor’s kid, and I grew up in the church. On this [project], I was able to spread my wings some and relax. Toby is a little more natural femme than me, but it is fun to lean into the femme of it and be one of the girls for an entire movie.”

One of the executive producers is Scott Turner Schofield, a transgender actor and activist who used to live in Atlanta. Schofield was ecstatic to work in the horror/slasher genre, where the LGBTQ characters usually don’t last long.

“This film was built on your expectations,” Schofield said. “You and everybody else has watched LGBTQ characters be the victim over and over again, so what’s exciting (without any spoilers) is you’re going to have a better time.”

Besides the cast, Schofield also credits an unbelievable crew for making the experience such a positive one.

“In Georgia we are shooting so many projects, we were worried about getting crews,” Schofield said. “LGBTQ members of other crews quit their jobs to come work on this because they wanted to work on something queer. I ended up running into a friend that I used to work with when I was a waiter at Cowtipper’s. The hometown vibe was wonderful. The way we feel queerness in the South, the way we create community in the South, is a warm and beautiful thing and it was right there on our set. It was awesome.”

“They/Them” is now streaming on Peacock.