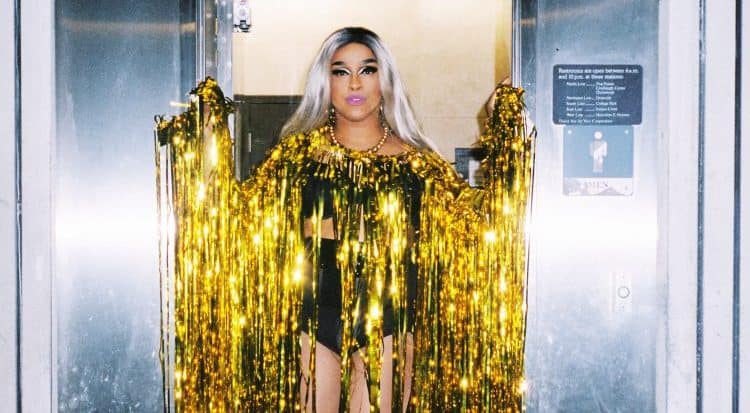 Atlanta is known for a lot of things in Southern queer culture, including producing some of the nation’s finest drag queens, vocalists and activists. Griffin native Taylor Alxndr does them all with the intelligence and panache that one would expect from someone born and raised in the South. Alxndr, who is executive director at Southern Fried Queer Pride and outreach and events specialist at Atlanta Pride, performs July 7 at Eyedrum Art & Music Gallery and will release her first EP, “Noise,” later this month.

Tell me about your upcoming EP, “Noise.”
It’s my first official music release and I am so excited about it. There are five songs on it. It’s upbeat, high energy synth-pop with a little bit of house and some influence from the ballroom scene. I think it’s unique because the songs are about the different struggles that my community and I go through. I don’t write love songs, but I do try to focus on writing things that I know about. I’ve worked on it for almost a year now. It’s going to be released on July 21.

Can you dance to it?
I certainly hope so. I want people to dance to it. But I also want people to think to it. The lyrics are kind of deep. I have one song about Black Lives Matter. There’s another song that talks about my tug-of-war relationship with my mom. It’s all very danceable, but it will invite people into their feelings when they listen to it.

You’re also a drag queen here in Atlanta?
Yes, I am. I perform at Burkhart’s Pub and Eyedrum Art & Music Gallery. I also run a show on the second Tuesday of every month called “Sweet Tea.” It’s a queer variety show that has drag, comedy, performance art and things like that. I am also starting a new drag show at Sister Louisa’s Church of the Living Room & Ping Pong Emporium on Edgewood. It will start on July 6 and continues every first Thursday [after that].

How did you get into music and performance?
I’ve been singing and performing since I was very young. I used to do these shows at local banks and businesses in my home city of Griffin, Georgia. I sang at the Georgia [National] Fair in Perry one year. But, then I didn’t feel that I had the resources to have a viable musical career. About two years ago, I bought some software and started experimenting and making songs. It wasn’t until this past six months that I saw the EP coming together and just kept working at it until I felt I had something really good to share.

What do you identify as?
I identify as queer sexually and politically and as agender – I consider myself genderless, although I use “they” or “her” as my pronouns.

What was growing up in Griffin like for a genderless queer?
Griffin was very chill. There was not a lot to do there. I grew up on a 400-acre farm so there wasn’t really much to do besides go outside and then go back inside. It was [more] easygoing back then than it is currently. Now, they have an influx of people moving in because it’s so cheap to live there and is on the southern edge of the metropolitan Atlanta area. A lot has changed, but I had a good childhood. I can’t complain.

Does your family support your career?
My family doesn’t know anything about my sexual identity, my gender identity or my music. I just don’t bring it up. Having the acceptance of my parents isn’t something that is of high importance to me. As long as I’m happy and fulfilled by what I do, I’m good.

You are also an organizer for Southern Fried Queer Pride (SFQP). Tell me about your role.
I am a co-founder and the current executive director. I co-founded it in 2014 with my friend, Mickey Bradford. We started it mainly because we didn’t see a space for trans or people of color, especially artists and activists in the community. There were a lot of issues surrounding our community so we wanted to create an event for there to be an outlet.

At the core of what we do is creating events that facilitate experiences for people of color, the trans community and those who are more marginalized in the South. In national LGBT conversations around the country, the South is often left out of these conversations because we are considered too conservative or not relevant. We wanted to be the link between the queer community and artists and activists and try to give a voice to those who aren’t often heard.

What kind of events does SFQP have?
We just had this year’s festival. It was five days long. We had typical dances and socials but we also kicked it off with an event specifically for the Latino community. We had another event called “The Jewel Box” specifically for the trans community for building inner community trans resilience. We had workshops, a variety show for queer performance art, discussions about racism in the queer community – a lot of things like that. Next year, it will be on Stonewall Weekend in June.