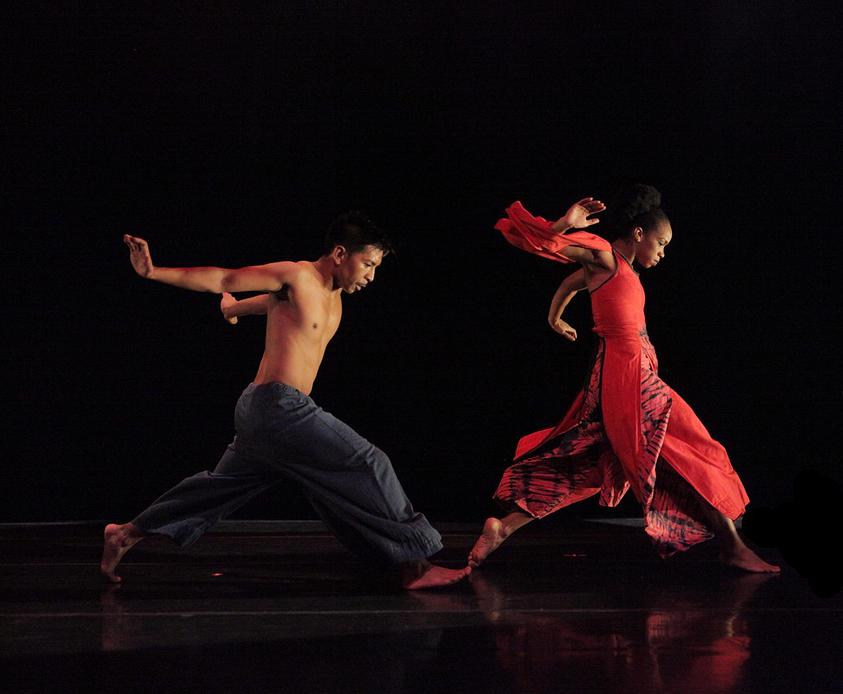 The energy was infectious during the National Black Arts Festival last weekend, as nearly 300 fans gathered at the Ferst Center for the Arts to witness the artistry of Ronald K. Brown's EVIDENCE Dance Company. In existence for 30 years, but not nearly as well known as some of its modern dance contemporaries, Brown's work is targeted, specific, and has no qualms about dealing with issues ranging from same-gender relationships to politics and spirituality.

The evening opened with "WHY WE FOLLOW/POR QUE SIGUES" (2013), originally commissioned by the Joyce Theater in New York City and set by Brown on Cuba's MalPaso, one of several Cuban dance companies visited by Brown in search of a home for his new work. The methodical piece, set to music by Zap Mama, began relatively slowly, allowing the highly trained dancers to display elongated lines woven seamlessly into earthy African-based movement. The choreography wrapped the dancers in a continuous conversation between gravity and the body, continually pulling feet to earth and rhythmically saying "hello." Legs extended to the side with pointed foot and repeated side attitudes were highlighted motifs of the evening, as well as very high flex foot battements exploding from grounded pelvic floors. The work itself hung on a very structured formula, perfected by Brown over the years, that was at times inwardly focused, and at other times fully confrontational.

The calm blue ocean of "Why You Follow" eventually evolved into Brown's signature celebration motif with dancers praising God in duets, trios, and full company praise and worship. The dancers snaked through the space in lines that cut the space one behind the other, leading the work to a satisfying end. The middle of the program was satisfying and solid. "MARCH" (1995) was a powerful duet performed by two women, Clarice Young and Atlanta native Annique Roberts. The duet was initially choreographed for two men. These two powerhouse women carried the work, especially Atlanta native Roberts, a graduate of Tri-Cities High School for the Visual and Performing Arts.

"SUBTLE ONE" (2014), a company piece set to the jazz music of Jason Moran, filled the middle of the program, and although it is a very solidly choreographed piece, it dragged in comparison to Brown's other works.

The pace quickly picked up as the show closed with "GRACE" (1999), originally choreographed for the Alvin Ailey American Dance Theater, set to the music of various artists, including Duke Ellington, Roy Davis Jr. and Fela Kuti, with costumes by Omotayo Wunmi Olaiya. I have been blessed to see "GRACE" many times, and it is always a moving experience, and this performance of  "GRACE" by EVIDENCE is no exception. The work unfolds as earthly angels dressed in white guide lost souls dressed in red towards Heaven. The complicated plot reveals new stories to me each time I watch "GRACE." And this time, a beautiful love story between two male dancers, Arcell Cabuag and Keon Thoulouis, kept my attention.

The program offered a near-perfect evening of dance. But EVIDENCE must find a way to reach untapped audiences over the next 30 years. It's truly a shame that EVIDENCE, unlike its more renowned counterparts in the modern dance world isn't a household name.