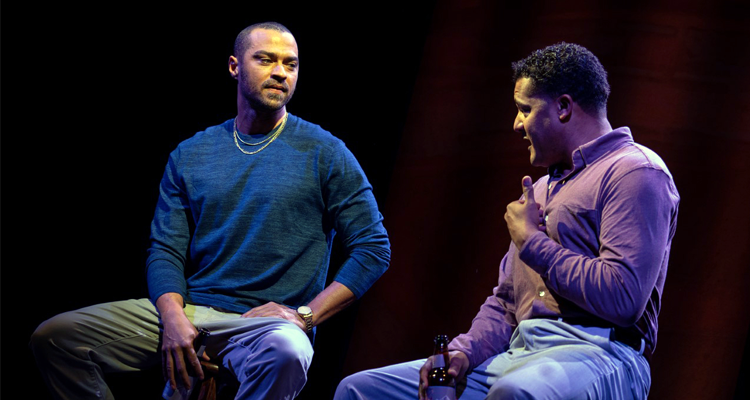 As if the normal ups and downs of a long season aren’t trying enough, the fictional professional baseball team the Empires has to deal with the unexpected coming out (and the aftermath) of one of its players in Richard Greenberg’s Tony Award-winning play, “Take Me Out,” now getting a strong Broadway revival.

Said player is Darren Lemming (played by “Grey’s Anatomy” star Jesse Williams), a multiracial center fielder star who has decided to tell the world he is gay. His teammate and friend, Kippy Sunderstrom (Patrick Adams), lets him know that his fellow players might be uncomfortable around him moving forward. As the Empires go into a slump, they hire pitcher Shane Mungitt (Michael Oberholtzer), who reveals in an interview that he is uncomfortable with the people of color on his team and having to shower with a “faggot.” The character of Mungitt has drawn parallels to former Atlanta Braves pitcher John Rocker.

“Take Me Out” premiered off-Broadway in 2002 and then made it to Broadway the following year, winning three Tony Awards, including Best Play. For gay men of a certain age (including me), it’s a revered work, one that is exceptionally written and groundbreaking. When I heard that a revival was being planned, my initial thought was, “Why?” My next thought a few seconds later, though, was, “When can I see it?” As it turns out, no one was able to see it for a while. The staging was delayed a few years by COVID-19, but the play officially opened last month.

“Take Me Out” is a complex drama that focuses not only on Darren’s coming out. but also on how it affects others on his team and around him. No relationship is richer in the show than that of Darren and his gay accountant, Mason Marzac (Jesse Tyler Ferguson), who knows nothing about baseball before Darren comes out. The two bond and share how neither feels part of their community.

Directed this go-round by Scott Ellis, “Take Me Out” has a very tight ensemble and is nominated for four Tonys this year, including Revival of a Play and Williams, Ferguson and Oberholtzer for Featured Actor in a Play. Ferguson can’t quite reach the heights that original Mason Denis O’Hare (who won a Tony for his work) did, but it’s nonetheless a showy, very funny performance. He also gets the play’s sharpest monologue. Former Atlanta actor Brandon J. Dirden, who played Darren in a 2005 Theatre of the Square version of “Take Me Out,” is in the cast, playing a different character, that of Darren’s friend Davey Battle.

Williams and Ferguson have received the bulk of the headlines, but the best performance comes from Adams. His Kippy is really the glue that holds the show together.

This revival isn’t quite as gripping as the original Broadway production, but it’s still a remarkably relevant and impactful piece of theater. Ironically, even though the show opened almost 20 years ago, no professional baseball players have since come out.

Part of the appeal of both shows is the universal characters, including LaVonda and Brother Boy.

“I think the characters resonate so much because these are characters we see, especially if you grow up in the South,” Morgan said. “Everyone is someone in your family and someone you went to church with.”

He likes “Wedding” because it gives the audience a chance to see all these beloved characters together, whereas in “Sordid Lives” they were all compartmentalized.

“All the stories intertwine in ‘Wedding’ and you also see a lot of emotion here,” Morgan said.

This is only the second version of the play that has been produced, the first directed by Shores himself.

At the root of the comedy is an important message.

“It’s about loving one another and accepting people for who they are,” Morgan said. “You’d think that because gay marriage has passed, people would be over that, but they are not, even today.”

“A Very Sordid Wedding” runs at Onstage Atlanta through May 29