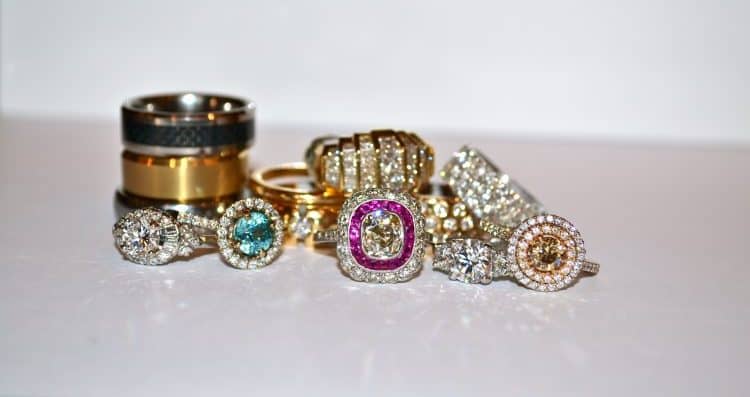 With this ring, I thee wed: Atlanta jewelers on wedding bands, engagement rings

There’s a lot of tradition associated with marriage: the proposal, the exchanging of vows and rings. But for LGBT couples with same-sex spouses, the tradition is, well — there isn’t one.

Which means there’s lots of room to be creative, especially in the ring department.

“Tradition says a guy asks a girl and gives her a ring. Well, what do we do? Usually you have someone that does the asking, and whether it’s a boy or a girl, they usually ask with a piece of jewelry,” said Jonathan Shapero, owner of Jonathan Buckhead in Atlanta’s Buckhead neighborhood.

Regardless of gender, coordinating seems to be the game these days, as partners choose not to wear exact matches of each other’s wedding band or engagement ring.

“Today we’re seeing a lot of partners getting a lot of diamond-centered or colored stone-centered with a beautiful mounting made,” said Harris Botnick, owner of Worthmore Jewelers in the Ansley area of Atlanta. “Usually the bands for the wedding are made to go with the rings and each wearer’s is individual.”

Shapero coined the term “man-gagement” ring because when it comes to tradition with men, there’s no such thing as an engagement ring followed by a wedding ring.

Botnick said most men still want the romance of proposing: opening the box and popping the question.

“You can buy bands anywhere from under $100 on up. Guys will start with bands like that if they’re going to have a ceremony and then they’ll come back and get something with or without precious stones,” he said.

The contemporary metals are things like titanium, cobalt, tungsten carbide and tantalum, which have unusual textures, patterns and colors that make striking statements. Botnick also carries one-of-a-kind rings made using a Japanese technique called mokume gane. Those allow spouses to get mirror images of each other’s rings.

“Yellow gold is starting to have a comeback,” Botnick said. “In other parts of the US and the world especially, yellow’s been strong. Atlanta is usually five years behind Miami, New York.”

White gold and platinum still dominate for wedding and engagement rings, and rosegold is popular for women’s rings. Mixing metals, where a ring is made of twisted bands in different colors of gold, is also fashionable.

Shapero said for women who want an edgier band, there are alternatives to the traditional solitary diamond and smaller band and the more masculine, thick bands.

“I did a beautiful wedding set, for instance, for an attorney and her girlfriend. The girlfriend wanted a diamond engagement ring and a diamond wedding band, and the attorney wanted a wide platinum, substantial band with some diamonds,” he said. “It’s a beautiful ring and it’s still a feminine ring, but it doesn’t evoke the same message as an engagement ring and a wedding band. It’s stronger, bolder. So there are designs for girls that fit into a whole different category if they choose.”

Botnick said the main trend in 2017 is a lot of customization and personalization of rings.

He said customizing rings can range from a complete build or altering an existing ring that gets a bride or groom what they want for closer to their budget. Shapero echoed his statements, saying that semi-custom and classic styles are the way to go.

“For girls, classic and traditional simply means an engagement ring with a single solitaire stone and possibly side diamonds or possibly a diamond halo around the center stone, and then a matching wedding band,” he said.

Because the wedding jewelry will be worn daily, Shapero also advises couples not to do something “far-out,” but said it’s possible to add modern flair to classic architecture. In additional to the contemporary metals popular today, colored stones are another way to personalize rings. Black, blue and yellow diamonds are trending, and for a brighter pop of color, Shapero recommends sapphires that come in every shade of the rainbow. Rubies, also a variety of sapphire, are an option as well. He said the semi-precious stones may get damaged more easily, but jewelers will have those available too.

“We do a lot of ladies’ pieces with morganite, which is a really pretty peachy-colored stone that was originally called pink emerald,” Botnick said, adding it got its moniker from its most famous collector, J.P. Morgan.

No matter what a couple wants in their jewelry, Botnick said it’s important to note the lingo has changed since 2015.

“We don’t have to say these are ‘commitment bands’ anymore. These are wedding bands,” Botnick said. “We’re signifying our love for each other. We’re making a commitment, as any couple would.”