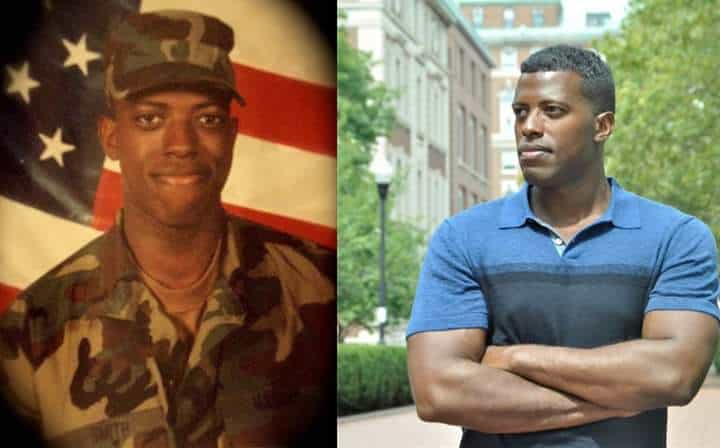 Rob Smith: Coming of age as a gay man in the Don’t Ask, Don’t Tell army

The first two minutes of my military experience were a blur. No sooner had I gotten off the bus at Fort Benning and retrieved my luggage, as directed, and stood in front of it, I made the mistake of glancing at the drill sergeants out of the side of my eye. They entered the area with their chest-jutting, tough-guy swagger. They seemed somehow larger than life: tall, angry, and terrifying. They meant business, and first up on the agenda was to scare the living hell out of all of us.

I felt every eyeball in the room on me, the lone pepper spot in a sea of bald heads and clean-shaven white faces. I felt weak and exposed. The other recruits were doing their best to focus their attention directly forward and pretend not to notice the scene that was being performed by our new superior for their benefit.

The drill sergeant looked at me, studying me. Although I was trying to maintain my forward gaze, I realized it was bordering on the impossible and decided on a split-second act of defiance. I looked him directly in the eyes, trying desperately to swallow the fear that enveloped me. As I looked into them, using every bit of my resolve to keep his gaze, I sensed a white-hot hatred that simmered below the surface. I engaged him there for what seemed like hours, giving him my brand new “don’t fuck with me” look. In my mind I thought of every rap video, every “hood” movie I’d ever seen with a young black guy killing someone, selling drugs or robbing someone, men who I was told by my thuggish cousins that I could never be like because I liked books instead of rap music, writing instead of sports.

The drill sergeant’s eyes twinkled and a smile spread widely across his lips. Suddenly, I was afraid, and I felt a wave of fear unleash within me. I knew what was coming, which was possibly the worst thing that could come out right now. He looked directly at me then stepped back to make his pronouncement to the roomful of recruits that I would be spending the next six months with.

“What are you, a fucking faggot?” he said. It was less of a question and more of a pronouncement, made loud enough so that everyone in the staging area could hear it.

I flinched, taking two steps back and nearly falling backwards over the luggage that was stacked neatly behind me. I quickly regained my footing. That would not be a good way to start this process. I had to think quickly, to do something that would end this now.

The words came out of my mouth as unexpectedly as the vomit a few hours after I’d had my first shots of whiskey on my seventeenth birthday the past summer. His head whipped something that would end this now.

The words came out of my mouth as unexpectedly as the vomit a few hours after I’d had my first shots of whiskey on my seventeenth birthday the past summer. His head whipped back around toward me. The other recruits and the officers staged in front of us were barely pretending not to pay attention any longer. This was quickly becoming quite the scene.

“You ever eyeball me like that again and I will end you, you faggot,” he spat.

I waited for a smile, for some sign of the showy badass he had put on for the company for the last five minutes, but there was none there. It was the real him, and he wasn’t a fan of my fake bravado or the little stare down I had given him earlier. I was confused and looked down, but instinctively looked back up and straight ahead. Through my peripheral vision I could’ve sworn I saw the faintest smile on his face, but there was nothing happy about it. It was grim and fearsome, somehow devious. For the first time since I had come to Fort Benning and the Army on a whim, I was afraid. Whatever he and his cohorts had in store for me and the other 124 recruits over the next six months wasn’t going to be fun. Playtime was over.

The preceding was an excerpt from “Closets, Combat and Coming Out,” available on Amazon and wherever LGBT books are sold. For more information about Rob Smith, visit www.robsmithonline.com.