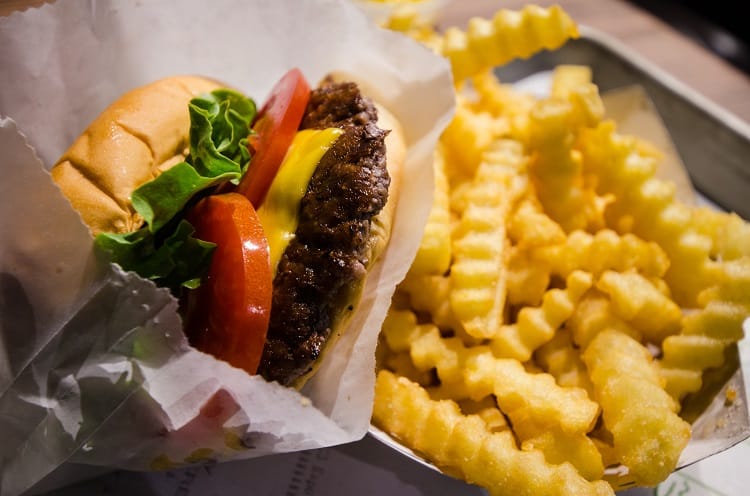 In search of nostalgia, and the perfect burger at the Shake Shack

I spent my teen years in Sandy Springs. There was one shopping center on Roswell Road when we first moved there, along with two restaurants and a bowling alley. That was it. The area, populated by white people, was commonly referred to as the “Golden Ghetto.” But it wasn’t as golden as Buckhead, where you went to do serious shopping. The big attraction was Lenox Square—then an open-air mall decorated, incredibly, with concrete figures from the Uncle Remus stories. Yes, that’s how oppressively white it was.

When a MARTA station opened at Lenox, it became a citywide destination. That meant black people began appearing at Lenox and they later dared to party in Buckhead Village. But don’t you worry. Racism survives and if you want a little taste, check out the website for the new Buckhead Atlanta (buckhead-atl.com) at 3035 Peachtree Road. So far, two black faces appear amid the website’s many pictures of mainly young white women living, shopping, and preening. In my two visits there, the only black faces I saw were staffers at two restaurants.

Sorry, but it’s generally the kind of place that makes me shudder. Maybe things will get better. Maybe I went on White Pride days. Please don’t tell me that this is a “luxury” residential, retail and restaurant development and the reality is that blah blah blah.

All of this makes me almost ashamed to admit that I had two fun meals there. The best was at the Shake Shack (www.shakeshack.com, 470-809-9201), a national chain that receives raves everywhere, making many cities’ best burger lists. What’s the big deal? Several things. First is the recycled décor. You gotta love table tops made from old bowling alley lanes. The walls and seating are made of reclaimed pine and otherwise pedigreed wood.

The food is eco-friendly as well. The Angus beef is free of antibiotics and hormones. Ditto for the hot dogs. Frozen custards contain no corn syrup—sugar only—and the milk is hormone-free.

All that may relieve your eco-friendly guilt but the tastes will inflame your inner glutton. The four hamburgers are made of a blend of several cuts of beef and all are topped with the famous and mysterious ShackSauce, a seasoned mayo that many have tried to duplicate at home. The only extravagant, calorie-laden addition is the smoked bacon in the SmokeShack.

What I’m going to recommend shocks me. The ‘Shroom Burger is the best vegetarian burger I’ve ever tasted. It’s not low-calorie. Nor is it dairy free. But OMG. The kitchen makes a patty out of chopped Portobello mushrooms and stuffs it with cheddar and muenster cheeses. It’s fried until crisp and then stacked with lettuce and tomato. It’s not as messy as it sounds. The cheese filling oozes only slightly. If you’re absolutely determined not to have a vegetarian meal, you can combine the ‘shroom patty with a beef one. In fact, any burger can be bought in a double-patty version. Honestly they are kind of small and, if you’re not doing any sides or ice cream, definitely go for it.

I didn’t try one of the split hotdogs. The menu says they are grilled until crispy. Crinkle-cut fries, the only side, are super-crisp but pretty pedestrian. You have to try the insanely rich custard. I ordered a concrete—vanilla custard blended with a slice of pecan pie from H&F Bread Co. There’s also one that riffs on s’mores and features intense chocolate chunks from Cacao Atlanta. Milkshakes vary from week to week.

I also visited American Food and Beverage (678-705-0454). It’s pricier, but the corned short rib Reuben was worth its $13 cost. I’m going back for the duck pot pie and the fried chicken, and I’ll report more in a few weeks. Maybe my next trip will not be an entirely white safari.