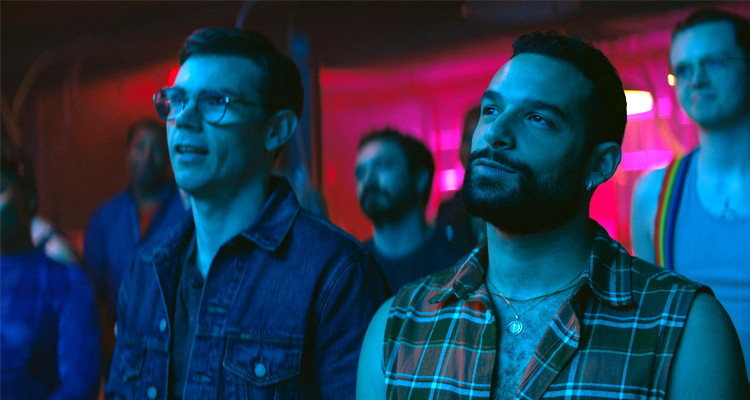 Show Creator and Cast Talk About the New ‘Queer as Folk’

For many of the principals of the new version of “Queer as Folk,” the original series not only entertained them but eventually inspired them, including cast members Ryan O’Connell and Johnny Sibilly.

Sibilly, who plays successful lawyer Noah, remembers watching that version early on as well, knowing that he was not supposed to be watching it.

“I was 12 or 13, flipping through the networks,” he said. “It was one of the first times I saw what queer life looked like and would look like for me. It was exciting and overwhelming and captivating and really hot. Watching as I got older, it was great to see queer people on TV being queer.”

Show creator Stephen Dunn, who also served as a writer, executive producer and director on the series, watched the U.S. version in his basement with the volume way down and rented the U.K. version, which aired from 1999 to 2000, while he was in high school.

Now streaming on Peacock, the new “Queer as Folk” hopes to be as groundbreaking as its two predecessors. Dunn describes it as being about a community rebuilding in the wake of a tragedy and navigating a bigger, safer space. In addition to newer faces such as Fin Argus, Devin Way, CG and Jesse James Keitel, the series also stars Kim Cattrall and Juliette Lewis.

Dunn began developing the show five years ago and knew at the time any version that existed today had to reflect the current social climate — what is it like to exist as a queer person?

“So much has changed in the last 20 years and the definition of the word queer has evolved,” Dunn said. “I think we’re at a time when the existence and amplification of queer voices, stories and representation feel more important than it ever does given the climate and what we’re experiencing as a culture. [In the show], you see queer joy, resilience and defiance on the screen in an unapologetic way.”

For O’Connell, he too felt there was a lot to say.

“It’s been 22 years since the U.S. version and so much of what has defined queerness has been updated and conversations around diversity and inclusion have deepened and changed,” he said. “We are able to make a show in 2022 that we never could make in 1999. 1999 was beyond groundbreaking and amazing, but now we can bring to the forefront and include characters like mine that were not included in the original. It doesn’t feel like woke, intersectional bingo. It feels real and lived in. These people are not just holograms of their identity and their marginalization.”

Julian is deeply loving and wants to be loved, the actor — who also is one of the co-executive producers and writers — said. “It was rewarding to start him off as a salty bitch, but you do see his defenses go down.”

He and Cattrall had never met, and he was nervous beforehand. They met on the first day of filming.

“Kim was formative to my experience as a human,” O’Connell said. “I worshipped at the altar of ‘Sex and the City’ and especially Samantha Jones. I was immediately at ease with her. She is so funny and bright.”

Sibilly’s character is a lot more complex than you might anticipate from the first moments.

“When most people see Noah from the outside, he is this cis daddy who has it all going on, the job, the house, the sex, but what he keeps inside is a lot of a volcano of emotion and messiness and lot of unhealed trauma,” he said. “He reminds me of gay men I know who don’t allow you to see behind the curtain.

The actor is quite prominent this season. He also stars in “Hacks” as Wilson, the boyfriend of Marcus (Carl Clemons-Hopkins).

“Queer as Folk” is now streaming on Peacock.