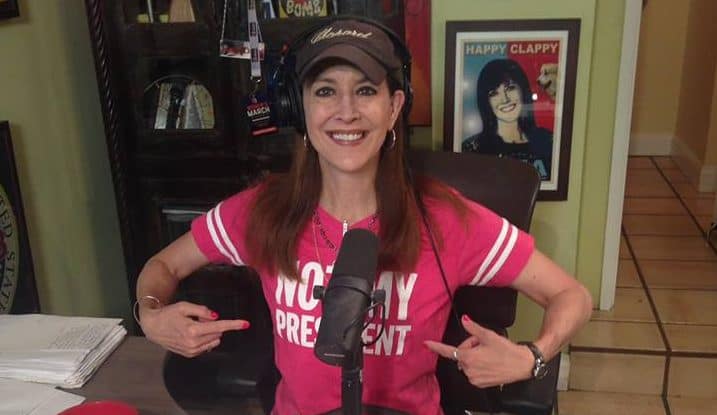 Nationally syndicated lesbian DJ Stephanie Miller is back in Atlanta — on the radio, at least. “The Stephanie Miller Show” just got added to the weekday lineup with the arts AM 1690 station, WMLB.

“Given recent events, the timing is perfect for a progressive voice on Atlanta radio,” station manager Jeff Davis said in a news release. “We’re thrilled to have a recognized professional who’s built a reputation standing up for liberal causes.”

Miller is known for her comedic take on politics, and her political background crosses the spectrum. She’s the daughter of William Miller, who ran alongside Republican Barry Goldwater in 1964, but today her views go a little further left.

Georgia Voice took a few minutes to catch up with Miller, whose résumé includes hosting CNBC’s “Equal Time” and Oxygen’s “I’ve Got a Secret,” as well as appearances on “Hannity and Colmes,” “Today Show,” “Tonight Show,” “Good Morning America” and more.

Stephanie, welcome to the Atlanta market! Do you know much about the Atlanta area? Have you been here before?

I have, in fact! Atlanta was such a running joke because I had a late-night TV show opposite Leno and Letterman. I was on a really great affiliate in Atlanta, the ABC affiliate, right after “Nightline.” I had some incredible ratings in Atlanta — I had the same numbers as “Seinfeld” and “Friends” did. They were like, “Oh, you could always go do ‘Good Morning Atlanta’ if this doesn’t work out.”

When I hosted “Pure Oxygen” on the Oxygen network, we did the show from Atlanta for a week and I just loved it. It was fantastic. I’m such a big fan of John Lewis; had him on my radio show. It’s been an interesting bunch of degrees of separation from Atlanta for me.

You mentioned John Lewis. Just talking about right now, this political situation, so many people are using comedy to get through that. How do you tackle those really heavy issues?

What’s happening right now, it’s not funny. I feel like this lunatic’s about to start World War III. I appreciate John Lewis so much because he was one of the first people to stand up and say this man was not elected legitimately. In my opinion, it’s not a coincidence that we’re seeing all this rash military action when one damning story after another about Russia comes out and the net is clearly tightening.

We’re kind of in a race against the clock. So many people tune in. They’ll say, “Oh my God, you’re my sanity because I’m a blue dot in a red state.” I feel like I’m taking crazy pills so I think it is like, always a joke. It’s amazing how many people are relying on me for their sanity, as lightly tethered to my sanity as I am.

They do always say you’re better in opposition. Like comedians had so much material with George W. Bush.

It’s a lot of material, but also, as I’ve been saying, a lot of this is not funny. To try to find the humor in it when it’s getting increasingly more frightening for people is difficult at times. This is the first time in my career I’ve had so many people calling me in tears to the radio show, and it’s because they’re scared — whether they’re minorities or afraid they’re going to die or their lived ones are going to die because of healthcare issues.

I think a lot of people felt like mainstream media failed on the job and that’s part of why we’re here. I’m not asking for liberal bias. I think people are just asking for the truth. … We’re just at a point where I mean, he’s such a clown that it is fairly easy to make fun of him. My co-host always said that we elected America’s drunk uncle. He’s like your lunatic grandfather at Thanksgiving except he has the nuclear codes.