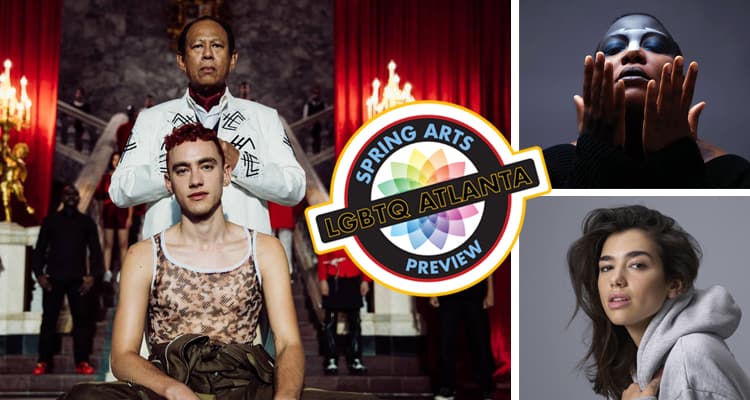 If you’re searching for exciting new music to plug into this spring, it’s definitely in direct earshot.

Of all the album releases to drop this season, none comes with more excitement and anticipation than Calum Scott. With a voice parallel to Sam Smith, the 29-year-old UK singer struck gold with his intimate balladic cover of Robyn’s “Dancing On My Own.” He continues that same trajectory towards mastering dreamy pop and crossover success on his newly-released debut album, “Only Human,” a disc blessed with heartfelt gems like “You Are the Reason” and the opening track “If Our Love Is Wrong,” which he describes the latter as being his “coming out song.”

“[This] was one of the first songs I wrote for the album and was a turning point for me in my personal and professional life,” he wrote on Twitter. “It’s an empowering song and I hope it can inspire other people to feel proud of who they are too.”

Back in 2015, Iggy Azalea took a brief hiatus from music and also dropped out from performing at Pittsburgh Pride after experiencing a bit of backlash from posting homophobic tweets. She’s since apologized and is rebounding (recently performing at Roscoe’s in Chicago). The art-heavy neon-layered concept video for her new single “Savior” is now on everyone’s lips. With a flowing tropical house melody and Quavo’s vocal hook, it’s the perfect return to the charts for the “Fancy” rapper and a glorious setup in becoming a summer anthem contender.

Synth-pop band Years & Years just dropped the music video for their new single “Sanctify.” It’s been getting a lot of buzz and was ranked number one on YouTube for trending within 24 hours of its debut. Frontman Olly Alexander explained that the song was inspired by his experiences with men who claimed to be heterosexual but felt the desire to explore their sexuality.

House music icon Crystal Waters is soaring up the Billboard Dance charts (rising to number 18 last week) with “I Am House,” a clever throwback to her feverish ’90’s club workouts. Check out the dance contest on the “Gypsy Woman” socials, where the best of the best submission will be used for the forthcoming concept video.

Trans advocate and actress Laverne Cox is even jumping into the realm of music with “Beat for the Gods,” a track that channels “Drag Race” runway EDM.

Other musical expeditions to look out for: bisexual neo-soul songstress Meshell Ndegeocello, scheduled to perform at Terminal West on March 21, just dropped a new album (“Ventriloquism”) this week; LGBTQ ally and Atlanta resident Janelle Monáe drops her third LP, “Dirty Computer” on April 27; Charlie Puth, a performer at DC’s Capital Pride in 2016, drops his sophomore album, “Voicenotes,” on May 11.

On the road again

The 2018 Shaky Knees Music Festival and highly-anticipated shows from U2, Justin Timberlake and a retiring Anita Baker are all on the menu for Atlanta’s spring schedule, but there’s plenty more where that came from, especially amongst LGBTQ acts and their closest allies.

With her bestselling single “New Rules,” breakout star Dua Lipa is already working on a new album. She told Rolling Stone, who described her as “pop’s gangster of love,” that the forthcoming music will still be pop, but will draw inspiration from Prince and “a lot of OutKast.” She’ll arrive at the Coca-Cola Roxy on June 9.

Former One Direction singer Harry Styles, bouncing off a soaring debut LP and largely-successful single “Sign of the Times,” is bringing his world tour to Atlanta on May 11.

Other upcoming shows include alternative hip-hop sensation K.Flay (March 24 at Variety Playhouse), singer-songwriter Kimbra (May 14 at Terminal West) and “Never Gonna Give You Up” ‘80s legend Rick Astley (May 1 at Center Stage).

And with “March Madness” on our minds, Atlanta Freedom Bands, a group made up of local LGBTQ musicians, will perform a soundtrack of music highly associated with the world of sport on March 24 at the Shrine of the Immaculate Conception.

Coming up from down under

Some very talented Aussies are also making their way to Atlanta this season.

Dance-pop sensation Betty Who, best known for her viral hit “Somebody Loves You,” is on the road promoting her latest album.
“It’s such a blessing and I’m so grateful for the support of the LGBT community has shown me, because I wouldn’t have a career if it wasn’t for those first shows where people showed up,” Betty Who said to Gay Times back in 2017. She’ll be returning to Atlanta to promote her latest album “The Valley” for a show at Terminal West on March 25.

A field of purple

With the second anniversary of Prince’s death looming over us (especially since his “Piano & A Microphone” performance at the Fox was one of his final performances), two tribute events are in the pipeline.

The ATL Collective will pay homage to the Purple One’s double LP opus, “Sign O’ the Times” on March 31 at the Buckhead Theatre. Dionne Farris, GURUFISH’s Jimmy St James and the Black Bettys and many others are scheduled to appear. Then in June, 25 Shades of Purple will host Celebrating the Purple Genius, an event spearheaded by Prince super fan Ben Umbreit (aka DJ Ob-1 Benobi) that will honor Prince’s 60th birthday and offer up an all-encompassing experience filled with music, costume contests, purple lavished décor, memorabilia giveaways and special guest performances.

Prince performed a moving cover of David Bowie’s “Heroes” at the Atlanta show. The legacy of Bowie will also be celebrated with an all-star tribute made up of friends and former bandmates at the Buckhead Theatre on March 18.