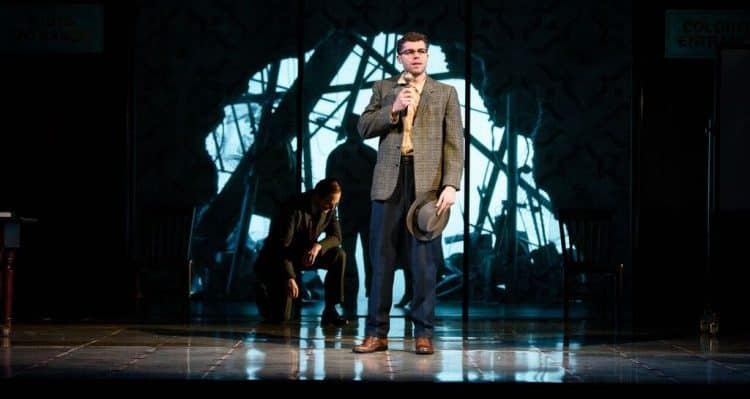 Speaking out for social justice is part of the DNA of The Temple in Midtown. Commemorating it is an integral part of the 150th birthday celebrations happening this year, starting with “The Temple Bombing” — a play chronicling the events of Oct. 12, 1958.

The Temple was bombed as a response to its rabbi’s outspokenness on civil and human rights, a legacy that continues today with The Temple’s civil rights projects, including speaking out on behalf of the LGBT community.

“This is the first act of domestic terrorism … to the Civil Rights Movement in Atlanta,” said playwright Jimmy Maize, who put the show together as part of Tectonic Theater Project.

Originally founded as the Hebrew Benevolent Congregation, The Temple was built to provide proper Jewish burials for those moving to Atlanta for work. It also allowed congregants to take care of the poor and needy, said Rabbi Peter Berg. In 1946, Rabbi Jacob Rothschild came to Atlanta to lead it.

“[Rothschild] was stunned at what he saw: water fountains that said whites here, blacks there. Everything he saw he just couldn’t believe,” Berg said. “He then began to try and change the fabric of the society.”

German Jews in the South were not only a minority, they were also still rattled by the 1915 lynching of Leo Frank, Maize said. Frank, who was a member of The Temple, was the superintendent of a pencil factory in Atlanta. A 14-year-old girl was murdered at the factory and the crime was pinned on him, despite little evidence supporting the charge.

“The fervor of anti-Semitism rushed his case through,” Maize said. “A jury of his ‘peers’ found him guilty and he was sentenced to die. The governor looked over the evidence and decided to commute his sentence because of lack of evidence.”

After his sentence was commuted, but before Frank was released, Maize said “a mob of very well-known and prominent Atlanta citizens” broke into his cell and lynched him.

“Ever since 1915, Leo Frank’s murder has cast a pall over Jews in Atlanta, particularly the congregation of The Temple,” Maize said.

This made them reluctant to take any kind of moral or political stance such as those preached by Rothschild. But the bombing changed both the congregation and the city — in a good way.

“Nobody was hurt. Nobody was in the building at the time, but it did rip a significant hole in the wall. Rabbi Rothschild was undeterred. He began to speak out even more forcefully,” Berg said. “Our congregation looks back now with fondness and affection, with his speaking truth and power and standing up for what was right. Our social hall was rededicated after the bombing as Friendship Hall because of all the friendship the congregation received.”

Maize said the response to the bombing was an outpouring of support from Atlanta.

“What could have gone one direction in terms of creating more fear or causing recriminative acts was actually a moment of healing from deep, deep wounds in the history of this community and gave them newfound faith,” Maize said.

He hopes to have captured that in “The Temple Bombing,” which isn’t a traditional play.

“Our mission statement is to investigate new theatrical forms. What occurs is usually a style of theater that is a mix between documentary material, interviews, court transcripts,” Maize said. “It’s very visual and experiential, and doesn’t feel like dry documentary material. And that is due to the process of finding how all the different theatrical elements can help tell the story.”

The container for the story is a trial of the perpetrators, but the story is told through scenes, through directly addressing the audience and news footage.

“We have a good track record of documentary-style material, taking real-life events and theatricalizing them,” Maize said.

In addition to the play’s unusual type of storytelling, the actors themselves are a bit of a surprise. The real-life members of the congregation are portrayed by actors who may not be their same race or gender, Berg said.

“It throws the audience at first, but it’s really a spectacular, ingenious thing of the playwright,” he said.

While writing the script and planning the show, Maize traveled back and forth to Atlanta, doing interviews, going through archival records and working alongside historian Janice Rothschild Blumberg, the widow of the late Rabbi Rothschild. “The Temple Bombing” stars Todd Weeks as Rothschild and Caitlin O’Connell as his wife.

Maize said last year, when The Temple officials approached his theater company to put a play together, he was struck by the beautiful story of faith and perseverance, as well as the similarities between 1958 and 2016.

The timeliness of the play is remarkable, Berg said.

“I’ve seen it about five times,” he said. “The audience universally talks about how unbelievable it is to see the play this week after two Jewish cemeteries were desecrated; after so many bomb threats.”
“The Temple Bombing”
Through March 12
Alliance Theatre, 1280 Peachtree St. NE, Atlanta
Tickets: https://alliancetheatre.org/production/the-temple-bombing