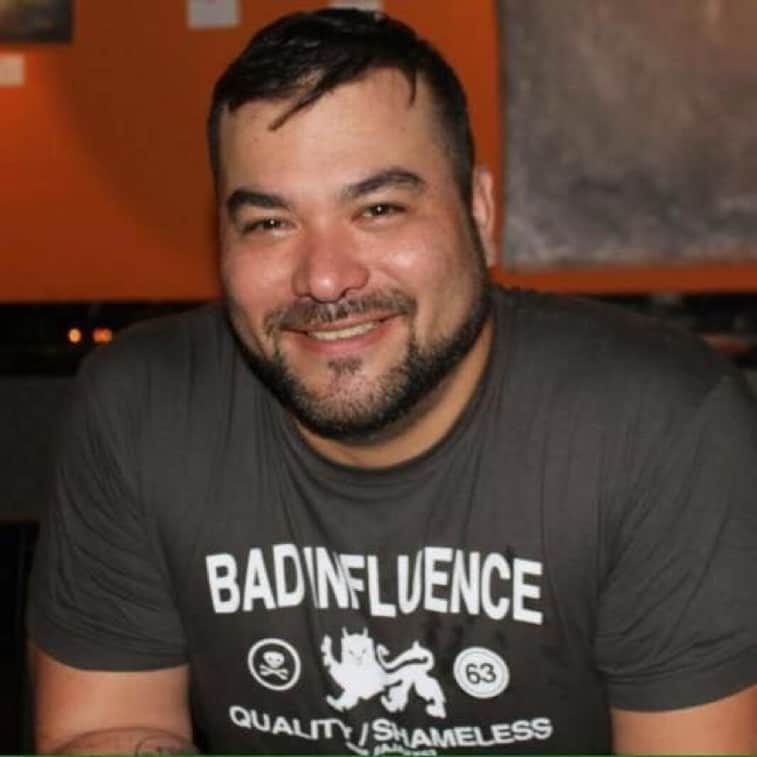 Earlier this year, mixologist Tony Jackson walked away with Georgia Voice’s Best of Atlanta award in the Bartender category. Tony has been pouring at the Atlanta Eagle for over eight years now, and has been a witness to many shifts and changes in the gay bar scene. We caught up with Tony to talk to him about his career, his passion for people and to snag his favorite cocktail recipe, “Santa’s Milk.”

Georgia Voice: How did you get started in mixology?

Tony Jackson: I started because it was a lot of fun and I always wanted to open my own bar. I was working on my undergraduate degree and it fit well with my school schedule.

I began at a leather bar in Arizona. After it closed down, I moved to Atlanta. I worked at 3 Legged Cowboy for about three months, and then started working at Atlanta Eagle and have been there ever since. This is my eighth year at the Eagle. But I’m also an adjunct art professor at a technical college, too. I teach art history as well as create my own art painting with acrylics.

You’ve been a mixologist for 13 years. You must love it. What is it that you find the most satisfying about your career?

This is going to sound hokey, but I love the people. We get everybody at the Eagle. People think it’s just a leather bar because they have this preconceived notion about it. But here lately, especially over the past two years, we’ve had a whole new demographic of people. They just enjoy the space.

We want people in our community to see us as a neighborhood bar. Everybody is welcome. The bar owner, Richard (Ramey), came up with a slogan during Pride weekend: “Whatever you’re into, that’s what we are.”

During the weekdays, it still has that leather-esque feel. But on Fridays and Saturdays, we are just one of the most fun places you can be in Atlanta. After 10, which is like the magic hour, everything cranks up. We have a guy outside who cooks the best burgers in town. At 10, our leather shop opens, the blackjack table opens, the DJ starts spinning. It all starts up and everyone has the best time.

Are women welcome, too?

Oh, we have TONS of women! They come in all the time. We are also fortunate enough to be one of the only bars in town right now that hosts a transgender group that comes in. We have a lot of transgender customers.

Bartenders have the reputation for helping people. Do you feel like that’s part of your job?

Sometimes. I remember there was this one guy who liked to dress up in drag but he didn’t feel like he’d be comfortable there. I just told him, “If anybody bothers you, you just let me know. Because you’re welcome here and they’re not.” He loved coming in after that.

Back in September of 2009, the Eagle made national news when it was raided by the Atlanta Police Department. It was later confirmed that the police broke several laws, lied and acted inappropriately to many patrons. Do you think the reputation of the bar was affected by that?

At first, people were really supportive, but then they started to disappear. It kind of coincided with the timing and use of (social media and dating) apps. Once upon a time, leather bars were kind of thought of as being these crazy hot spots where all of these things were going on. But we’ve had to change our image for the better. People still find each other there, but that’s the case with any bar. For us, it’s more about finding friendships and being the place where it doesn’t matter who you are or what you look like, you’re going to have a good time and people are going to love you.

I had a guy that came in. It was his first gay bar experience and I was the first gay bartender that he knew. He was kind of scared. I tried to put him at ease and he ended up feeling so comfortable there that about four months later, on Halloween, he came in with his parents. They were all in costumes and they had the best time together. It was fantastic to see. That’s why I do this.

Shaken lightly and poured into a