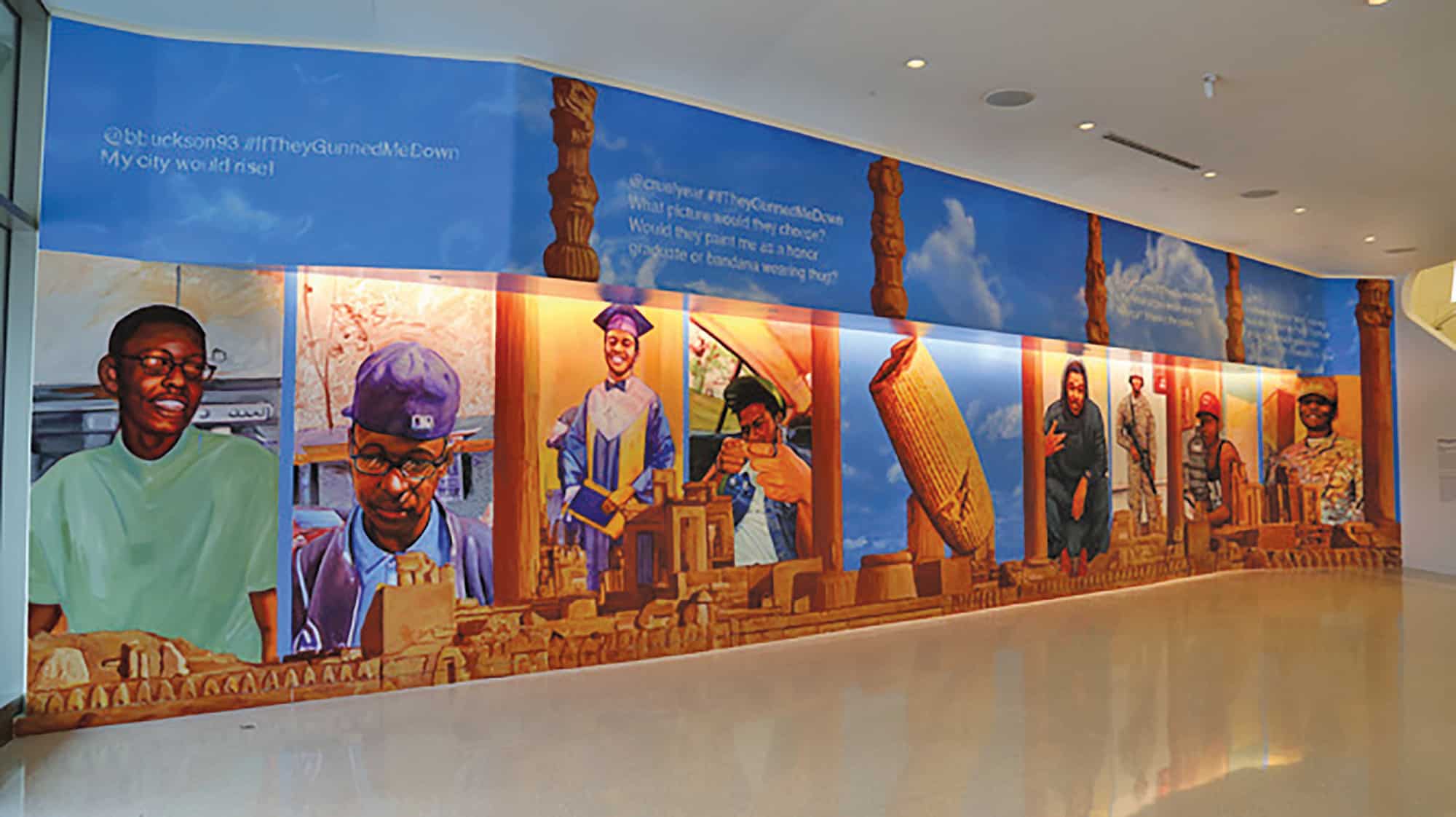 The Fine Line Between Art and Vandalism

Aidan Edwards
Culture
September 14, 2018
When we hear street art, some of our thoughts migrate to graffiti. Then we remember that one time we got plastered with our delinquent friends off Barton’s vodka, spray-painted a phallic object on the entrance doors of our high school, and received our only misdemeanor. (Or was that just me? Let’s move on.)
Graffiti has traditionally been about identity: an open display of a group, community, gang, faction, or individual. It’s like showing everyone your identification without anyone asking for it. Cops may want to detain you when you’re done, or rival gangs may want to scrap with you over it.
But now, street art has morphed into a reputable dominion of the creative world. A fair amount of this prosperity is due to the likes of an unknown artist that goes by the name Banksy. His stylistic use of absurdity and bleak humor within his art produces an intellectual trait to vandalism. However, it’s vital to give credit to pioneers such as Keith Haring, Jean-Michel Basquiat, and Blek le Rat for laying the groundwork. Simple words from a can have turned into murals.
This new acceptance has led to cities commissioning artists to create murals, and this, of course, includes Atlanta. Why are cities doing this? Because it’s not only beautifying, but it brings in people — people running into our potholes. At least they can see Gaia’s astonishing mural on Sunrise in Edgewood as they skin some tire-tread on a pothole. But seriously, It’s a devastatingly beautiful piece in a location that fits his artistic agenda.
I first saw Gaia’s mural entitled #iftheygunnedmedown in The Center for Civil and Human Rights museum. Gaia resides in Baltimore, but is known around the world. I had the opportunity to speak with the artist himself, and he schooled me on various topics:
It seems that not much has changed since your #iftheygunnedmedown mural. How did you come to work on this piece?
Mónica Compana of Living Walls was asked by the Civil and Human Rights Museum in Atlanta to choose an artist to respond to contemporary issues. I chose to focus on the emergent hashtag #iftheygunnedmedown, as an important representative device that exposes the duplicity of the media regarding the extra-judicial lynching of black people at the hands of the police. Two images of the same person are compared in two different contexts. This comparison questions the narrative the media tells about black victims of police violence. I sought permission from a Missouri lawyer named CJ Lawrence, who is the author of the hashtag that caught national attention, and from each of the people represented in the painting who participated in the hashtag exercise. I then developed the concept with an artist from Baltimore named Brandon Buckson, and we recreated painted Facebook posts in the streets exploring this duality which is posed by the question: “iftheygunnedmedown … which portrait would the media use?”
The public tends to misconstrue street art for vandalism. When did you first begin to display your work in public?
Vandalism is a liberal concept that seeks to dictate the interaction of property. Technically, everything I have done on someone else’s capital without their permission is vandalism, so categorically, under this definition, it is vandalism. I began guerrilla branding when I was 18 in 2007 and stopped putting up recognizable, illegal, posters roughly 2014.
When you first began, was your work aimed toward graffiti or elsewhere?
I believe in acknowledging the constraints of our identities. I am a fourth generation Italian American whose grandfather was a garbageman and whose father was in finance. While my father is from the Bronx, I am not, and thus, have never tried to copy letter styling, nor insert myself into the graffiti world. Instead, I have endeavored to respectfully stay in my lane, and be adjacent rather than try to fake the funk, although admittedly, I do sometimes tend to run my mouth online. The “Street Art” world was moving toward the mural game, so I developed a process that liberated me from the constraints of “personal style.” I decided that the work would be a visual synthesis into investigation of place, with the central goal of restructuring whose input is important and valuable.
Atlanta has changed so much in the last few years. What do you think of the city (then or now), and its artistic importance?
Every city is experiencing an increased invasion of white people, and the writing is all in the policy. If poor people are being displaced, and homelessness numbers are still growing, clearly the policy is not lying, and thus my work has been co-opted as a harbinger of militaristic community turnover. Obviously, I feel intensely ambivalent about my role in processes of gentrification, but ultimately the policy will determine the equity. I cannot imagine the pain of growing up in the city and then watching it transform so dramatically from such steep divestment; it’s almost as if in order to deal with the death of our hometowns, we all must move somewhere else to appreciate the positive aspects of such violent change.
* * *
I will say this about Atlanta, for better or for worse: Living Walls has established that Atlanta is a mural town, and their legacy is apparent in the new branding strategies all over the city.
Want to know what he does? GaiaStreetArt.com. Or get crazy local and check out all of the images and locations of Atlanta’s 400+ murals at StreetArtMap.org.