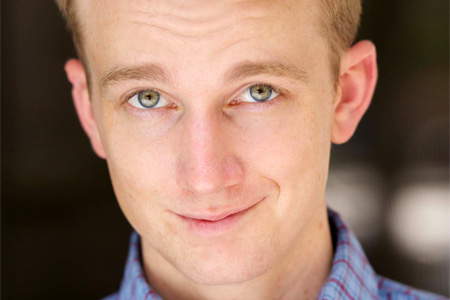 When Capitol City Opera presents its world premiere “The Secret Agent” this weekend, it does so with an openly gay cast member at its core – Chase Davidson.

An adaptation of the 1907 Joseph Conrad novel, “The Secret Agent” is set in 1930s London. It has a film noir flavor with espionage, secret agents, murder and betrayal. Davidson stars as Stevie, who is autistic and becomes the show’s tragic hero.

“Stevie is the only innocent character in the whole opera,” Davidson says. “He is passed off as an idiot.”

Back in that time, he says, medicine wasn’t as advanced as it is today and autism was regarded as a medical disorder that couldn’t be treated at all.

The adaptation is by composer Curtis Bryant, who is based in Atlanta and workshopped the piece locally before opening it. This is Davidson’s second gig with Capitol City Opera after performing at one of their previous fundraisers. Although there are no gay themes to the show, he feels the gay community will enjoy the “beautiful music and costumes.”

Davidson is a rare counter-tenor, meaning that he is a male who sings falsetto. The performer admits there aren’t many counter-tenors out there and audiences are often surprised when they see one.

“It’s foreign to a lot of people,” he says. “They are not used to that coming from a man.”

Most counter-tenors are in their 20s, he says, and have become more relevant since the ‘90s.

Davidson is involved with the Atlanta Opera Chorus, where he has been seen in operas such as “Carmen,” “The Golden Ticket” and “Don Giovanni,” where he played Giovanni.

A few seasons back, he was part of the national tour of the gay-themed musical “Spring Awakening” that came through the Fox Theatre.  It was a great experience.

“I felt like a rock star,” he says of the gig. As part of the swing and the understudy for two years, he could literally be called to do something new every night. Bringing

“Awakening” to Atlanta was nice for him, in that he got to invite his grandmother – who got him interested in musical theater – to opening night.

Davidson was also in the cast of a reading of the play “8” last year at the 14th Street Playhouse, directed by Actor’s Express’ Freddie Ashley.

Born in the area, he moved in 2004 to go to school at the Boston Conservatory.  He also lived in New York for a time before moving back to Atlanta in 2010. Although he loved living in New York, making a living there was proving increasingly more difficult.

He is still young – 27 – and is considering his plans when “The Secret Agent” is done. He is considering applying for a performing job on a cruise ship.

Being openly gay in the opera community has never been an issue for him. He calls it a warm and welcoming environment.

“I think the opera world is the most open of the arts forms,” he says.

He has many gay colleagues working in theater or TV who feel they can’t come out, but in the opera community, “people are very open, and no one cares.”