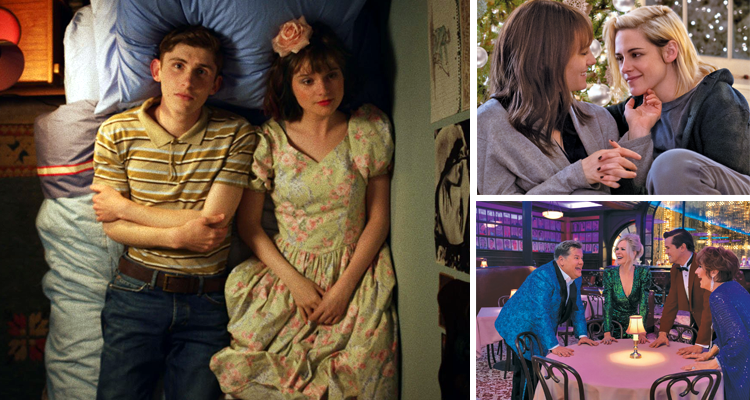 The Year in LGBTQ Cinema

2020 was a year unlike any we’ve ever experienced. COVID-19 affected every area of life, including film. Movie theaters closed for several months and then slowly began to reopen with safety measures in place. Since many audience members aren’t quite ready to return to cinemas, virtually all films took to streaming either right off the bat or after limited theatrical runs. All in all, the year saw a slew of LGBTQ titles.

My favorite LGBTQ film of the year was “Dating Amber.” Directed by David Freyne, the engaging comedy drama finds two friends in high school pretending to date so that classmates won’t tease them about being gay. Stacked up against some other 2020 releases, it was easy to overlook, but is well worth a visit.

The highest profile LGBTQ film of the year was undoubtedly Netflix’s “The Prom.” What began as a world premiere musical at the Alliance Theatre in 2016 and later a Tony Award-nominated offering on Broadway became a splashy movie, directed by Ryan Murphy and starring the likes of Meryl Streep, Nicole Kidman, James Corden, Kerry Washington, Keegan-Michael Key and Andrew Rannells. In it, a group of publicity-hungry actors come to an Indiana town to stand up for a young student (Jo Ellen Pellman) who wants to take her girlfriend to the prom. Many people loved it, many people hated it, but it was seen by plenty of folks.

Speaking of Netflix, it housed another major LGBTQ title in “Ma Rainey’s Black Bottom,” dealing with the legendary singer who enjoyed the company of women. The superbly acted movie was directed by a gay man, George C. Wolfe, and starred out actor Colman Domingo. Stars Viola Davis and the late Chadwick Boseman (in a career-best performance) are Oscar favorites for their work here.

Another major title was “Ammonite,” featuring Kate Winslet as Mary Anning, a fossil hunter who gets involved with a younger woman (Saoirse Ronan) coping with melancholia. Coming from director Francis Lee, the director of the classic “God’s Own Country,” it felt stiff, despite some much talked-about sex scenes between the actresses. It also suffered in comparison to the masterful “Portrait of a Lady on Fire.”

Two other big movies went directly to streaming. Directed by former Marietta native Alan Ball, “Uncle Frank” made a splash on Amazon. Its story of a gay man coming home to deal with family issues might not have walked new ground, but there was no denying the great performances from its cast, including Paul Bettany and Sophia Lillis. Clea DuVall’s romantic comedy “Happiest Season” — where Kristen Stewart accompanies her girlfriend Mackenzie Davis home for the holidays — was scheduled to land in theaters, but instead popped up on Hulu, where it was an undeniable ratings success.

Several excellent documentaries made marks this year. In “Welcome to Chechnya” — a possible Oscar nominee — David France (already an Academy Award nominee himself) looks at a handful of activists who put their lives at risk for LGBTQ rights in Chechnya. “Disclosure” was a bravura look at transgender representation through the years, directed by Sam Feder and produced by Laverne Cox, while Daniel Karslake’s highly acclaimed “For They Know Not What They Do” examined the parents of LGBTQ children.

The Oscars have been pushed to April of 2021, so several films that will be technically released in early 2021 are considered 2020 releases. One of those is the drama “Supernova,” in which Colin Firth and Stanley Tucci star as a gay couple who go on a road trip while one deals with dementia. Firth is a legitimate Best Actor contender, while Tucci is being pushed in the Best Supporting Actor field.

The extraordinary “I Carry You With Me” — which played one week in 2020 for Oscar consideration — is a love story about two men in Mexico, one of whom decides to leave everything behind and come to New York. Look for it in the spring. Also on tap in early 2021 are “Joe Bell,” starring Mark Wahlberg as the father of a bullied gay son, “Falling,” with Viggo Mortensen as a gay man, France’s superb “Two of Us” and “The World to Come,” which features a lesbian relationship between Vanessa Kirby and Katherine Waterston.