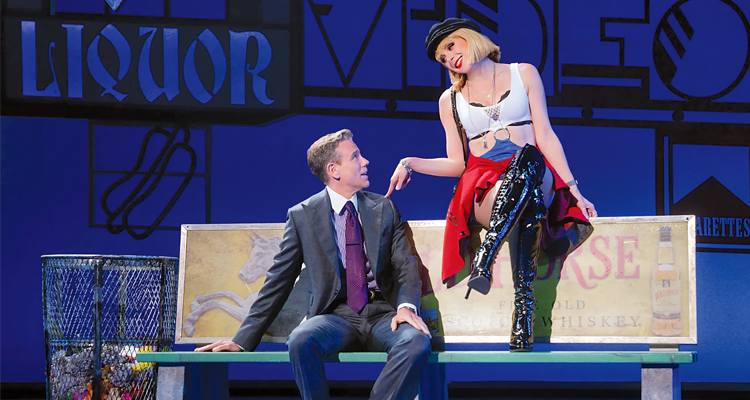 As part of the original 1996 Broadway cast of “Rent,” Adam Pascal and his co-stars knew they were part of something special, but none of them had a clue the work would become so iconic. The rock musical became not only a critical sensation, but also one of the longest-running shows on Broadway, making stars of its cast. For his role as HIV-positive songwriter-musician Roger Davis, Pascal was nominated for a Tony Award for Best Leading Actor in a Musical.

Since that time, he’s starred in the film version of “Rent,” as well as such high-profile Broadway productions as “Aida,” “Cabaret,” and “Memphis.” These days, he’s starring as Edward in the touring version of “Pretty Woman: The Musical,” courtesy of Broadway in Atlanta. It’s a musical take on the popular 1990 film that made a star of Julia Roberts about a businessman who hires a hooker for the weekend.

Pascal spoke to Georgia Voice about his involvement with the musical and what audiences can expect.

How did the show come up?

I’ve had somewhat of a history with this show. When [the producers] were doing an out-of-town tryout in Chicago, and then went to New York, the lead actor was not going with them, and they called me to see if I was interested in the part. I was still on tour with “Something Rotten,” and I had been on tour the last year and a half. My family lived in Los Angeles. I could not justify being on tour, going to New York and then not going home. I couldn’t do it. During the run, there were some one-week engagements, and they asked if I could do it. I did and when the tour came up, it was the perfect opportunity at the perfect time. They asked and here I am.

Why does this story resonate with audiences?

Because it’s a Cinderella story and people love Cinderella stories. It’s a story about an underdog and Vivian is an underdog. She ends up taking control of her own life and destiny, with a little help from my character. In the movie, it’s a little more he saves her, and in this version, she saves herself a little more. It’s a love story where people from different sides of the track fall in love and people love that. It has all the elements that appeal to a broad audience.

How does the musical compare to the film?

We are in a time now where making adaptations from films to musicals is very common. I think one of the trickiest things that people face when they do that is how much to keep from the original film and how much to expand or change. The attempt here was to keep as much as possible because so much of it is iconic. There are a number of scenes that are line for line from the film and a decent amount adapted but the big difference is that the story is being told in large part by music, an original score by Bryan Adams.

What have been the most significant changes in the show since its early days?

I would say the tone is different. It’s different than when I did the show on Broadway, and for the better. I think we have found, through a combination of intent and luck, a much lighter, funny comedic tone, and I think it lends itself to this story. On Broadway, it was a little darker and didn’t have the happy air our production does. I have noticed the audience reaction from what it was on Broadway is much different. I think people are having more fun. We are telling it in a brighter, cheerier way.

Can you describe your take of Edward?

It’s organically me. I didn’t make any specific attempts different than Richard Gere did. As theater actors, you play parts that other actors have played before. The key is bringing yourself and energy and your charisma and personality to the part. I try and bring whatever it is about my personality that people occasionally find appealing

Did any of the cast have any idea “Rent” would take off like it did?

You can never anticipate that kind of success and longevity. We knew it was special, but that doesn’t necessarily equate to success. The fact that this thing we were working continues to be so successful is mind blowing. I remember being in the room learning “Seasons of Love” on the first day of rehearsal. We knew this was something special. If it never went beyond the four weeks off-Broadway, it [still] would have been a life-changing experience.