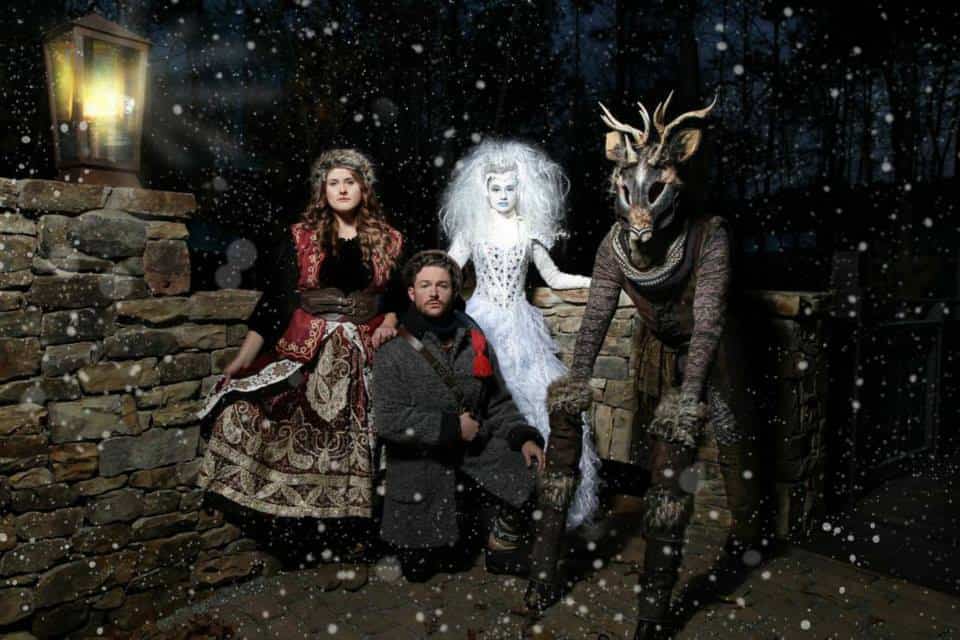 Not only does Serenbe Playhouse’s “The Snow Queen,” a new holiday production, aim to please adults and kids alike, it also has a strong contingent of LGBT artists in its cast and crew.

In addition to director Brian Clowdus, the company’s artistic director, the production includes Ryan Oliveti, the assistant director, choreographer Bubba Carr, and two performers in the show—Will Skelton as Kia and Robert Lee Hindsman as Grundal and Hagatha, both new characters.

“The Snow Queen” is based on Hans Christian Andersen’s fairy tale, and Rachel Teagle’s adaptation of it is a world premiere. It is the first show that Serenbe, known for its immersive theater, has staged in the winter; most of their work is presented in summer. It’s a story of good and evil, pitting two young characters against the titular Snow Queen.

Oliveti has been working with Serenbe since 2013, when he was the assistant director for “Sleepy Hollow.” His task here is to help Clowdus do what is needed, whether it’s conducting research, helping to develop the script/backstories for characters or improving an accent.

“My job really is to help make sure that his vision actually happens,” says Oliveti. The original text is not linear at all, he says, so he, Clowdus and Teagle have found a straightforward arc for all the characters.
Oliveti has worked in theaters around town, and after several gigs as an assistant director, he is pleased to be directing on his own for next year’s “Secret Garden” at Serenbe.

As part of the show, Hindsman is in drag as Hagatha, an old witch in the woods. A recent college graduate, Hindsman laughs at the irony of a 22-year-old playing a character in her 80s. It’s not his first Serenbe show—he played Oz in this year’s “The Wonderful Wizard of Oz”—but it’s still something of a learning curve to work on outdoor shows with the company. “Immersive theater is not easy,” he admits. Hindsman and the six other cast members are interns who’ve been living together, so it has made interacting simpler.

Former dancer Carr is also a Serenbe veteran. He worked on the company’s “A Midsummer Night’s Dream” in 2012, “Hair” the following year, and this year’s “Oz.” His most-noted show this season was perhaps “Oklahoma!” It’s one of his favorite musicals, and he and Clowdus made it a darker, “underbelly looking” version of the classic. His lengthy Act 1 dream sequence upped up the sexual component. “I tried to do something different with it,” he says.

According to Carr, Clowdus is very receptive to his style. “I tend to go to the dark, weird stuff pretty quickly and Brian will say what Serenbe can do,” says Carr. “But Serenbe is open; so many of them are artists. And Brian trusts me. Our senses of humor meld. We laugh a lot and have serious talks. Sometimes we butt heads but I think that is artists in creation.”
He consciously never designs choreography before rehearsals.

“I get the bodies in a room and I like to see how it develops,” Carr says. It’s been interesting, he notes, working with a cross section of performers, some with no dance training, and making the moves structurally interesting. He’s been able to challenge his crew and have them “rise to the occasion.”

For the character of the Snow Queen, he worked on moves to showcase all aspects of her. “I wanted to keep her strength but show her vulnerability and loneliness and sorrow and passion and rage—all the dimensions of the characters,” he says. The show also features troll characters, a reindeer and humans for him to choreograph.

He thinks LGBT people will be able to identify with the Snow Queen. “She wants to feel and connect with someone—and in the end, she has someone reach out and feel compassion for her,” Carr says. “As a gay man, I always felt separate. I felt different, not the same as other people until I found people who were accepting of who I was.”