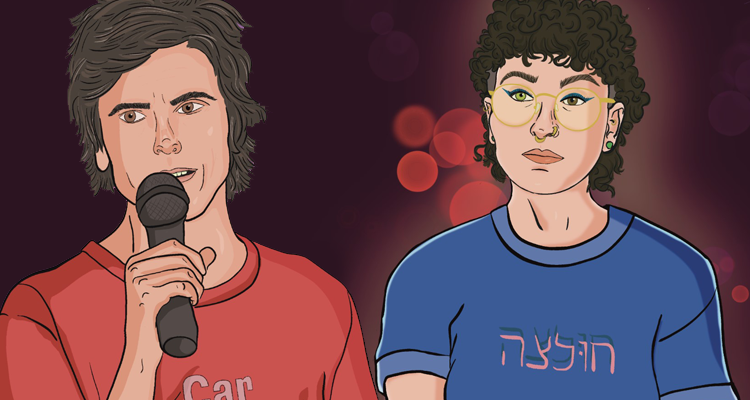 Armed with a mouse, Vorobetz’s first works were cultivated on Photoshop. Driven toward developing new hobbies during the pandemic, they started creating digital art on their iPad, from lore of mystical enchantresses to portraits of lovable local comedians. From there, “Themme Fatale” was born.

Vorobetz coined the exhibit name, “Themme Fatale” as a play on words on the term “femme fatale,” often used to describe an alluring female character who ensnares and destroys men. Historically, “femme fatale” characters have been seductresses exploring their sexuality. Such figures range from Morgan le Fay in the Arthurian myths to Alex Vause of “Orange is the New Black.”

Vorobetz’s art directly draws from this femme fatale spinoff. Half of the exhibit features portraits of comedians or films they found impactful. Other artworks incorporate imagery of women, focusing on the female form. Vorobetz told Georgia Voice that the work has some unrealistic, fantastic elements like horns or blue-green skin. While the imagery of the bodies is mystical, the intimacy of the work is innately human, simply capturing “women loving women.” Vorobetz said the art features “creatures that don’t exist, but it’s still clearly two women … loving each other.”

Their background in art transcends mediums — from a stint in film school to a passion for sculpting to learning to play the ukulele. One of Vorobetz’s first forays into art was attending film school, where they made a lot of video art. While they loved film, Vorobetz noted that attending school for art can kill your passion. Still, they were always growing, always drawing and their love of art transcended the draining aspects of school. Notably, Vorobetz has always been drawn to comedy, and their longstanding appreciation was a focal source of inspiration for their work. They credited Tig Notaro as a favorite: “queerness was just like a natural part of her performance,” Vorobetz said of Notaro.

Vorobetz discovered their love of comedy with a previous partner. They became enthralled with comedy in all forms, whether it was through performing, reading or watching. Whether they turned to comedy as an outlet after a particularly long day or as a way to connect people, comedy for Vorobetz was always about making people laugh. They dabble in improv as well, appreciating its “feministic” feeling and its ability to serve as a space to embrace weirdness. Being the “funny kid” growing up, Vorobetz has always loved being in a room full of people laughing. Still, their art is indisputably personal.

“Art is first and foremost for me,” Vorobetz said.

Vorobetz came out as queer in their 30s, which they considered to be later in life. Since then, their queerness has become a central part of their art.

“It’s been very important to me to first of all, educate myself as much as I can about the LGBT+ community,” Vorobetz said. “And also … that I’m comfortable with that side of me. Make sure it’s represented in everything I do.”