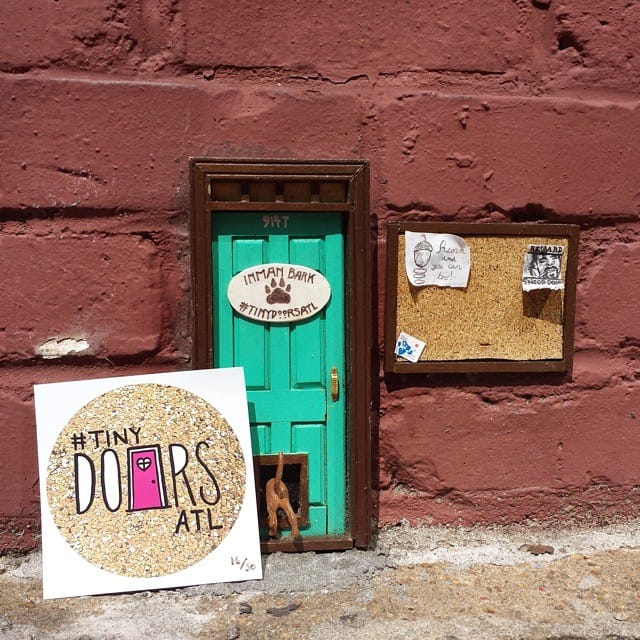 The Tiny Door on the BeltLine behind Inman Park Pet Works. (Courtesy photo)

The Tiny Doors ATL movement has spread to include a notable name in Atlanta’s LGBT community. Organizers behind the public art project announced Friday that the next Tiny Door is coming to Charis Books & More, with a ribbon cutting ceremony featuring Tiny Rosie the Riveter set for Saturday at 2 p.m.

The project is the brainchild of Sarah Meng and Karen Anderson, who both identify as queer/femme. They installed the first door in the Krog Street Tunnel last June, and with time random people starting placing trinkets by the door. Tiny jack-o’-lanterns at Halloween, a snowman during the holidays, etc.

The movement picked up steam and doors appeared on the BeltLine, at Inman Park Pet Works, Paris On Ponce, a tree on Freedom Park Trail, Little Shop of Stories in Decatur and more. And now Charis is in on the fun, with the door to be placed on the column on the front porch of the store.

“I first went to Charis in 2003,” Meng says. “The community of Charis has been very influential to my identity, resilience, and well stocked bookshelves. As soon as Tiny Doors ATL began to receive attention, I thought of Charis as a site for a door. I’ve been plotting for this door since early last fall!”

Meng spoke to Charis Circle executive director Elizabeth Anderson and Charis Books co-owners Sara Luce Look and Angela Gabriel about it and they were quickly on board.

“Sarah Meng is a long time friend of Charis and co-facilitates our Trans and Friends group so it’s always an honor to be a part of any community project she is leading,” Anderson says. “But mostly we just think it is a fun, playful, art project that helps link us to our neighbors in the city and might spur a tiny bit of unique tourism to Little Five and to Charis which is always a good thing.”

Tiny Doors ATL’s Meng calls Charis “one of the best things about Atlanta.”

“Supporting independent bookstores that authentically value diversity is imperative to the culture of Atlanta,” she says. “Tiny Doors ATL wants to take you off the expected trail and into old staples of the city which deserve to be newly discovered.”