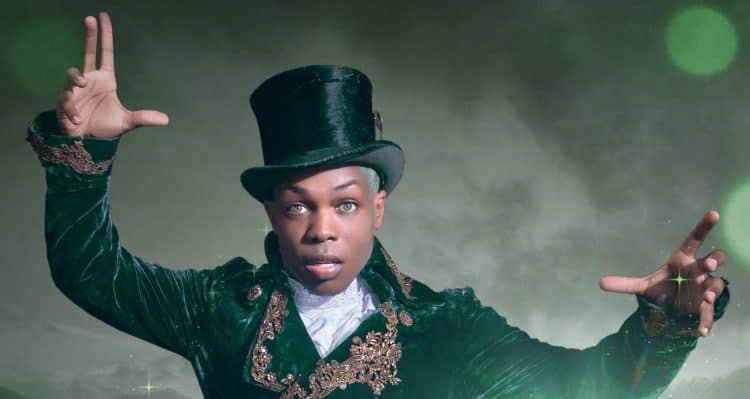 “I have always been obsessed with the story ‘The Wizard of Oz.’ I have seen everything. I’ve seen it on ice. I’ve seen it in Madison Square Garden. ‘Wicked’ — 15 to 18 times I’ve seen that show,” Hall said. “I basically was going through a really rough time in my life where I felt like the only thing was people were homophobic or racist or a mixture of both. I could have gone the route where I talked to people and made them see my viewpoint, or I could turn it into art. I decided to write this album that paralleled my life with ‘Wizard of Oz.’”

He drew similarities between himself and Dorothy, the orphan girl from Kansas who is swept up alongside her dog Toto in a tornado and lands in a fantastical otherworld of witches, talking scarecrows and flying monkeys.

“I felt like my life paralleled with Dorothy. All the things I was searching for that I wanted someone to help me find, I already had, and didn’t believe in myself,” Hall said. “I wanted to tell that story.”

True to form, Hall created a full visual album on his YouTube channel with original music and choreography, telling his story through the motifs and characters of the beloved L. Frank Baum literary classic.

“When people come see the show, they can expect to see the visual album live. It’s a mixture between a concert and a musical,” Hall said.

Though Hall didn’t design or choreograph every detail in “Straight Outta Oz,” he had a strong hand in each part of the visual album and touring live show.

“In our line of work … you have to pick a theme and go with it. Because I’m the only person who knows the theme, I have to be part of every aspect of every costume. If not, it can be a little bit discombobulated and a little clumsy on stage,” he said.

From zero to viral (videos)

“I was just fascinated with the costumes and the lights and the sets and the fog; not only how it looked, but how it worked,” he said. “I started just learning how to dance and writing musicals and writing songs. I always wanted to be creating things. … Basically I just stumbled upon theater and kept performing when I was at high school.”

His professional career kicked off at Disney World as a dancer, and included working on cruise ships and at Radio City Music Hall. He made his Broadway debut at age 20 and competed on “American Idol” himself in 2009. Hall said it was around that time he went to a place “that I was super depressed.”

It was then he turned to YouTube. Hall joined the video-sharing website several years earlier, but didn’t post his first video until a year before “American Idol.” Many of his videos are original songs, choreographed parodies — “Beauty and the Beat,” for example, is a hip-hop take on the Disney classic — and collaborations with other artists and fellow YouTube sensations. Hall’s YouTube stardom evolved to include stints working with “American Idol” winner Fantasia Barrino and a cappella group Pentatonix.

“I got to choreograph for Beyoncé and that was a really cool experience. I think the thing I’m most grateful for is that I made a really great friend in Taylor Swift. I get to go spend Thanksgiving with her and go hang out with her,” Hall said. “It’s really cool to be able to have a friend that’s experienced so much. I look up to her as a role model for how she runs her business and how she treats her fans. There’s no one who treats her fans as good as she does. … She makes me want to be a better person.”

Most recently, Hall was a judge on “RuPaul’s Drag Race” and performed in the Broadway musical “Kinky Boots.”

“I learned so much from being on the show and I grew so much. I had been headlining my own shows, but when you’re headlining an [award-winning musical] you have to step it up,” Hall said. “Having to do eight shows a week as a lead … you never leave the stage. It’s a different type of commitment.”

To prepare for his role each day, Hall not only had to rehearse, but had to watch his diet and how much he talked to ensure he was on point for the show.

“Everything about it was so difficult. It was the most fulfilling thing I’ve ever done as well. I hope to be able to apply all my new tricks that I’ve learned,” he said.

Playing a character who spends most of the show in shoes worthy of the Spice Girls gave Hall a new perspective on performing.

“I have such a huge appreciation for women, for everything that they do every day because it is so difficult to walk in heels. Why does anyone have to go through this torture?” he said. “I think every guy should have to walk in heels for a few months.”

For fans who hope to soar to their own YouTube stardom — and beyond, as he has — Hall said the most important thing is to not stop.

“So many people want to give up after five videos. It is so worth it in the end,” he said. “Be true to yourself. There are so many people out there being carbon copies. You already are unique.”