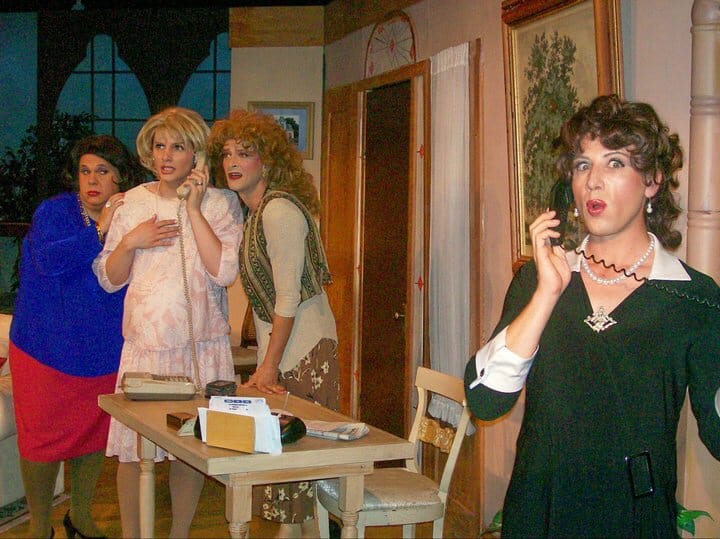 Topher Payne sleeps. Or at least he says he does. Judging from the work he’s done over the last few years, it’s a wonder he has time for shuteye. The gay playwright has become one of the city’s busiest and most produced playwrights.

This award is given each year to an emerging playwright who has not yet received national exposure. It’s a huge honor, and he hopes it creates some awareness of playwrights not living in traditional areas such as New York.

“It’s wonderful and quite surreal,” he says.

He learned of the honor a few weeks before he was able to say anything. “I was not allowed to breathe a word to anyone except my husband,” he says. “And I have a big mouth.”

He accepted the award April 5 at the Humana Festival in Lousiville, Ky., and spent the days before looking for an appropriate outfit. “I feel like I should represent the South properly,” he laughs. At press time he was gravitating towards a gingham/Seersucker ensemble.

Two shows at Onstage Atlanta—one current, one upcoming—involve him. “Designing Women Live” is now in its eighth season, with Payne and frequent collaborator DeWayne Morgan, artistic director of The Process Theatre, in heels as members of the Sugarbaker clan.

The newest installment features two episodes: “This is Art?” in which someone tries to buy Julia’s handbag during a gallery opening; and “The Mistress,” in which the ladies are hired to decorate a client’s house, in addition to a condo for the client’s mistress. Payne never envisioned “Designing Women” would take on the cult status it has. “It’s great to have a fundraiser that fits your audience so well,” he says. The money raised helps keep both Onstage Atlanta and The Process Theatre sustainable throughout the year.

Opening in a few weeks is “Lakebottom Prime,” a companion piece to Payne’s earlier “Lakebottom Proper.” It’s a farcical piece about a wedding marred by an evil mother of the bride, sick bridesmaids and a secret at the bottom of a lake. “Prime” has an LGBT angle, which Payne calls his way of tackling the issue of marriage equality.

Earlier this year he opened his comedy “The Only Light in Reno” at Georgia Ensemble Theatre, and last season his “Angry Fags,” presented at 7 Stages, was a big success, winning Payne a local Gene-Gabriel Moore Playwriting Award at the 2013 Suzi Bass Awards.

Payne is happy living and working in the Atlanta area and he wants to show that it can be done. His plays have been produced in New York, Washington, D.C. (where “Perfect Arrangement” premiered), Florida and in Mississippi.
He hopes that winning the award will bode well for other markets.
His ultimate goal would be to make a living as a playwright. That will require him to get published, however, and to get representation. He’d also like his work to get produced at more local theaters.

In other words, he’s not going anywhere. “I am absolutely rooted here,” he says. “While there may be additional opportunities in other cities, I have no inclination to leave. I know I am needed here. I know I am part of a really exciting, growing literary community.”