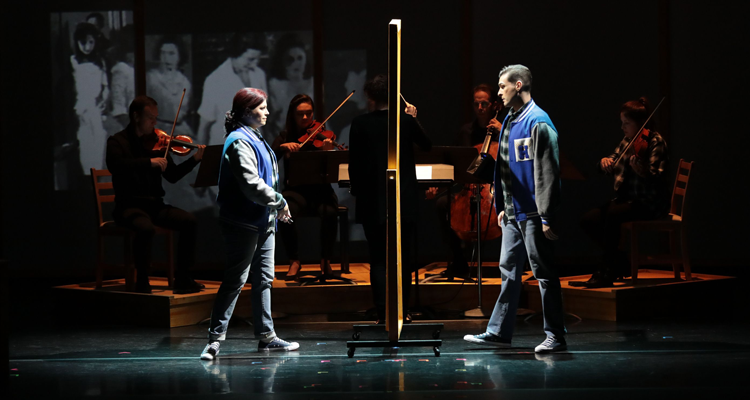 Atlanta Opera’s production of ‘As One’ / Photo by Terry Gilliam

As part of its Come as You Are Festival, the Atlanta Opera is presenting two exciting new works likely to be embraced by the LGBTQ community: “Cabaret” and the transgender themed “As One.”

This version of “Cabaret” is adapted from the 1998 Broadway revival. It ran for more than 2,377 performances at Studio 54 in New York. “As One,” on the other hand, had its world premiere in 2014 and is making its local debut with the Atlanta Opera. Composed by Laura Kaminsky with a libretto by Mark Campbell and transgender filmmaker Kimberly Reed, it’s the story of Hannah, a transgender woman discovering her true identity.

Transgender baritone Lucia Lucas stars and sings the role of Hannah Before in the production.

“’As One’ is a project I have known about since before the world premiere in 2014,” Lucas told Georgia Voice. “I read the libretto before the first performance. I wasn’t asked to do it until Atlanta. They were the first to ask me. It’s a piece I had interest in — there is not a ton of trans opera singers at all, and I don’t know how many of them have performed this piece. The majority of people who performed it were cis.”

As Lucas began learning the peace, the beauty of the work became apparent.

“There are some things that are the same; there is a base emotion to every scene,” she said. “Even for people who are not trans, even outside of the LGBTQ community, I think everyone can identify with somebody else’s expectations and not being able to live up to them, feeling frustration or pain, thinking everything will be okay if you can make someone else happy.”

According to Lucas, the character of Hannah is probably a generation or so older than she is. The opera goes through the character’s life chronologically. As Hannah is doing a paper route at the age of 12, she finds a blouse hanging on a clothesline.

“There is freedom on the bike, but sometimes she gets up extra early and puts this blouse on underneath her jacket and that gives her comfort,” she said. “She doesn’t know why, but it feels right. She also tucks a sock in the blouse, and it feels like she is brushing a breast as she does her newspaper. It’s a wish that she could participate in this feminine puberty.”

Junior high school was a difficult time for Lucas, as she felt her body was developing in a different way than her brain was. She had to figure out what the word “transgender” meant, which involved going to the library and doing research. Eventually, she figured out she was not alone.

She is a huge fan of librettist Reed and her film, “Prodigal Sons,” which chronicled the filmmaker’s coming-out process. Lucas does see a parallel between “As One” and that documentary.

After her own transition, Lucas was nervous about her career. She realized afterward that she had made the right decision.

“I knew there were no trans opera singers,” she said. “There were some trans instrumentalists. I knew when I came out, if people had problems with people in the pits or behind the scenes, someone on the stage would be even more of a thing. By coming out I was ready to give up my career. But I said, ‘I am going to fight for this — I am not going to roll over.’ Even supportive people didn’t have in their brain that this could work. Now I am not the only trans opera singer professionally. There are a handful of trans singers full time and plenty more in training programs or schools.”

Lucas was the first trans woman to sing a lead role in an American opera in 2019, taking on the role of “Don Giovanni” with the Tulsa Opera. Lucas’ performance in that work was featured in the documentary film, “The Sound of Identity,” by Georgia native James Kicklighter. The film will screen on June 13 with a Q&A to follow with Lucas and Kicklighter.