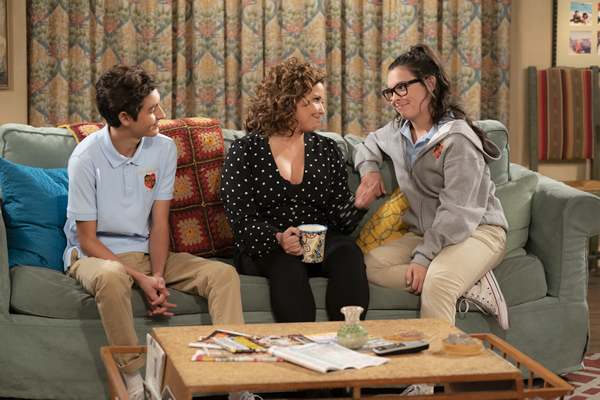 TV REVIEW: New Day for ‘One Day at a Time’

It only takes a few minutes for ingenious show runner Gloria Calderon Kellett to remind LGBT audiences why they fell in love with the reboot of “One Day at a Time.”

The fourth season opens with a fast-paced screwball comedy scene that smoothly reintroduces all the characters and reinforces the sitcom’s effortless flair for both humor and social commentary.

In a wonderful cameo, Ray Romano plays Brian, a bedraggled census enumerator who has to sort out the three generations of the Cuban-American Alvarez family as well as various members of their “logical” family who keep on popping into the scene.

He starts with Penelope (the outstanding Justina Machado), the frazzled head of the family, an Army veteran and a nurse practitioner. Then there’s teenage daughter Elena (Isabella Gomez), an out and proud lesbian, who is in a relationship with Syd (Sheridan Pierce), who identifies as non-binary and refers to themself as Elena’s “syd-nificant” other. There’s also her teenage son Alex (Marcel Ruiz) and her feisty mother Lydia Riera (a delightfully over-the-top performance by EGOT winner Rita Moreno).

In the midst of all this, there’s also an argument about whether or not the family should participate in the Census. Penelope declares “a guy wanting a list of all the Latinos in my house? No thanks!” but the hyper-socially engaged Elena passionately counters that the census is crucial for determining representation and federal funding. It’s a classic “ODAAT” moment.

Developed by the legendary television producer Norman Lear, the original “One Day at a Time” premiered in 1975. It introduced audiences to divorced mom Ann Romano (Bonnie Franklin) and her daughters Julie and Barbara (Mackenzie Phillips and Valerie Bertinelli), as well as the ever-present building superintendent Schneider (Pat Harrington Jr.). The popular and occasionally controversial series ran nine seasons through 1984.

Working with Lear, Kellett and production partner Mike Royce reimagined the groundbreaking sitcom with a Hispanic family at the core. The new series premiered on Netflix in 2017 but was abruptly cancelled in 2019 after three successful seasons. The series was picked up by Pop TV, the network that introduced American audiences to the LGBT series “Schitt’s Creek.” New episodes are dropping weekly, although production on the final episodes of the season has been halted due to COVID-19 concerns.

The show remains as vibrant as ever, a proud celebration of Cuban-American culture and queer family values. The writing is sharp and pungent, striking a fine balance between comedy, sentiment and insightful societal analysis. The show is stuffed with zippy quips and great physical comedy, but the humor is always well-grounded in the reality of the characters and their lives. The characters are well-rounded, appealing and full of interesting quirks.

With three award-winning seasons under their belts, the cast has developed an easy rapport with each other and the acting remains excellent. Machado anchors the series with her lively sense of humor, deep compassion, aching vulnerability and fierce resilience. Penelope has been faced with serious issues (including PTSD, addiction, abuse, racism, sexism and economic insecurity), but she’s a survivor, thanks in part to the encouragement of her support group for female veterans. The group is led by Mackenzie Phillips, who starred in the original series, and includes Ramona (a sparkling Judy Reyes) as a lesbian who loves to flirt with Penelope.

The rest of the cast is equally strong. The goofy chemistry between lovebirds Gomez and Pierce is delightful. The sexual bond between them is by turns electric and comic, expressed with lots of PDAs and lots of exasperated explanations of their sexualities, proper pronoun usage and a variety of other social justice issues. The easy-going Ruiz is an excellent comic foil for his more eccentric family members. Moreno is pitch-perfect as the exuberant family matriarch, combining a deep love of her family, a fierce pride in her Cuban heritage and her Catholic faith, brilliant comic timing, a pulsating sensuality and a wonderfully idiosyncratic use of American idioms, as well as terrific dance moves and a well-honed instinct for dramatic entrances.

LGBT fans of “One Day at a Time” have a lot to look forward to as the series settles into its new home on Pop TV. The opening episodes include a lively discussion of female orgasms, the return of one of Penelope’s ex-boyfriends, a girlfriend for Alex, lots of funny Halloween costumes and the penny-pinching Penelope shopping for a new couch.

Here’s hoping the proudly queer Alvarez family settles in for a long run on Pop.