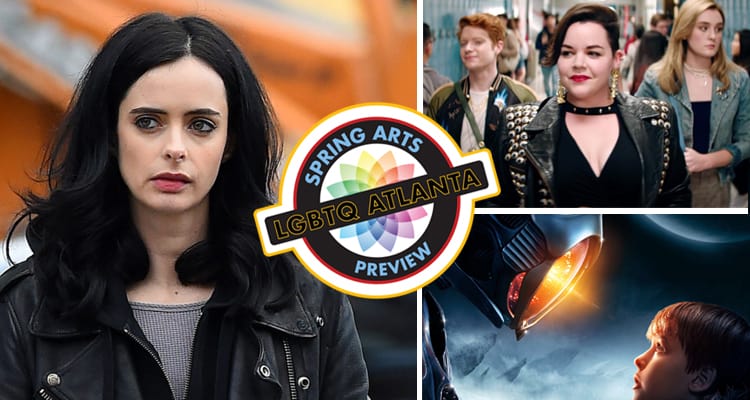 12 LGBTQ TV picks to spring into the season

As the old saying reminds us, March comes in like a lamb, but goes out like a lion. And while we’re on the topic of coming out fiercely, there’s thankfully a number of spring 2018 shows that feature the LGBTQ experience.

“Life Sentence” (Premiered March 7 on CW)
This dramedy narrative follows Stella, a young woman under the cloud of a cancer diagnosis. She decides to live it up — no consequences! But when she finds out her disease is cured, she’s forced to deal with the fallout from her wild choices. Among the big reveals: Stella’s mom, Ida, is in love with her best friend Poppy — who is also Stella’s godmother.

“Jessica Jones” (Premiered March 8 on Netflix)
Labeled as a “queer-inclusive, feminist superhero series” by After Ellen, the second season of “Jessica Jones” follows up on its beleaguered everywoman as she navigates the superhero scenes of noir New York. Icy power-lesbian Jeri Hogarth, played with panache by Carrie-Anne Moss, is a morally complex character in a world (and series) full of them.

“Rise” (Premiered March 13 on NBC)
This music-drama is a Katims-Seller collaboration based on the aptly-named book “Drama High.” Josh Radnor will appear in the starring role of Lou Mazzuchelli. The show is based on an actual program: Truman High School in Pennsylvania provided the inspiration. Pride.com called the series a mashup of “Friday Night Lights” and “Glee” — and promises to be a one-two-three punch of theater class meets high school meets primetime showmanship.

“You Me Her” (Premieres March 20 on Audience Network)
This three-pronoun-title romance is an American-Canadian comedy that focuses on the romantic travails of a polyamorous relationship between married couple Jack and Emma — and their new friend Izzy. They all fall in love together, and that’s just the start.

“RuPaul’s Drag Race” (Premieres March 22 on VH1)
You knew it would be back. Christina Aguilera guest stars in Season 10. The lip-sync battles. The 14 contestants. There are more legendary-queens-in-waiting than a British history book. This groundbreaking show is still arguably worth your time. Bring … back … my … girls.

“Roseanne” (Premieres March 27 on ABC)
The eponymous Roseanne was always a champion for gay causes, long before it was fashionable. Think Mariel Hemmingway. Think Sandra Bernhard. Think Estelle Parsons. The 2018 relaunch seems like it’ll follow in the same footsteps. Darlene has a gender-creative child, Mark (played by Ames McNamara), who experiments with nontraditional clothes and dynamic colors. The Conners are back; but, really, did they ever leave our hearts?

“Lost in Space” (Premieres April 13 on Netflix)
The rebirth of this sci-fi perennial features everyone’s favorite, The Parker Posey as Dr. Smith. Watch as Smith and the Robinson Family get thrown into the vast swathes of the interstellar void. Also, I’m sure there will be other actors and technicians involved. Let me reiterate: Parker Posey.

“The Handmaid’s Tale” (Premieres April 25 on Hulu)
The powerhouse dystopian sci-fi series is roaring into its second season. In the shadowy theocracy of Gilead, LGBTQ people are killed or strong-armed into sex work. The Margaret Atwood-inspired universe is the setting for the struggles of Elisabeth Moss’ Offred, and her lesbian friends Ofglen (Alexis Bledel) and Moira (Samira Wiley).

“Dietland” (Premieres June 4 on AMC)
This new dark comedy, featuring Joy Nash and Julianna Margulies, will see the light in early June. With Martin Noxon at the helm, “Dietland” is a timely tale of self-acceptance. The show is set dead center in the cutthroat world of the fashion industry. An overweight woman, Plum Kettle, readies for weight-loss surgery, only to be caught in the crossfire between two rising factions. Notably, “Dietland” will feature breakout transgender superstar Mya Jeanette Taylor, last known to audiences for her work in “Tangerine” and her winning an Independent Spirit Award. Taylor plays Barbara, a newcomer to the trans community.

“Heathers” (Premiere TBA on Paramount)
A TV spinoff of the subversively beloved dark comedy. Of course, the world has shifted since the ’80s. Heather Duke is gender-queer, Heather McNamara is a biracial lesbian and Veronica Sawyer is still a supposedly good girl with bad ideas about homicide. The show was set to premiere March 7 but was delayed indefinitely after the Parkland, Florida, school shooting.