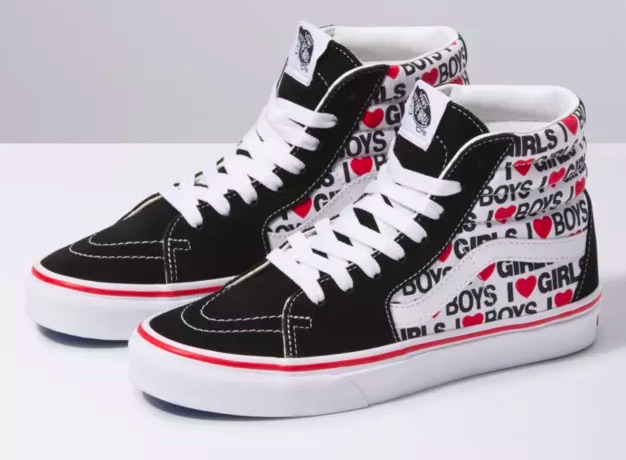 The company released three “I Heart” sneakers in their Era, Slip-On, and Sk8-Hi styles. All three shoes are red, black, and white and emblazoned with the phrase, “I Heart Boys, I Heart Girls.”

Other new releases include something for the youngins as well: a black slip on with a rainbow chenille heart on the toe and a shoe with rainbow hearts and rainbow chenille Velcro straps. Both styles come in toddler and kids’ sizes.

These are not the first LGBTQ-themed shoes Vans has released; for Pride 2019, they released a collection of slip-on and high-top sneakers with “love” written on them in multiple languages and colors. They also donated $50,000 to the Trevor Project, an organization dedicated to preventing suicide among LGBTQ youth.

While other sneaker companies also released a variety of Pride-themed sneakers last June, including Adidas, Reebok, Nike, and Converse, Vans appears to be the only—or at least first—company to release LGBTQ-inclusive shoes for a holiday that’s not explicitly LGBTQ.

You can shop Vans’ “I Heart” collection here.