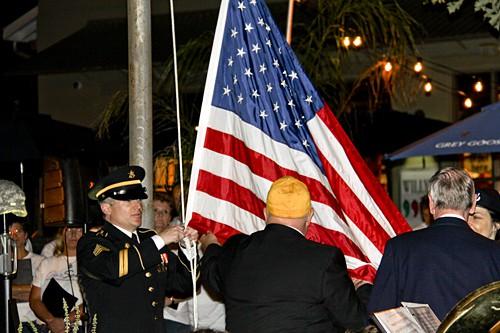 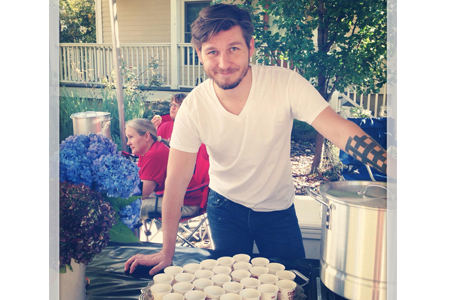 John-Paul Griffin, a handsome gay Atlanta man who works as a nurse delivering babies, is ready to be the Food Network’s next star.

The popular cable network is auditioning for the next Barefoot Contessa or Bobby Flay to host his or her own show and bring to the world charisma while cooking. Griffin thinks he has the perfect recipe.

Cooking for friends is a passion, he says. And, if you can cook on an electric stove, you can cook anywhere. He’s sent off his audition tape and answered a few questions about his passion:

When did you start cooking?
I started cooking when I was nine or 10 with my friend Robin. She and I would make Ramen noodles after school and we would always try and make them “fancy” by putting other stuff in it — leftover steak or chicken, corn, tomatoes, whatever was in the fridge. Sometimes it would be edible other times, well — our parents were glad those packages only cost 25 cents.

You competed in Chomp & Stomp this year, your first competition cooking. How’d it go?
I decided to enter Chomp & Stomp because friends told me I should after we went last year. So, even though I’ve cooked some big pots of chili before, cooking 10 gallons was a new task. I didn’t really place, but I got 12th out of 115 individual chili entries and I think that’s pretty good for my first foray into cooking for a win. I mean, Kevin Rathbun & Kevin Gillespie (two top Iron Chefs!) tasted my chili and didn’t think it sucked, so that’s pretty damn cool.

Do you have a favorite cooking story?
My favorite cooking story is hard because when I can cook for friends I just love it. The most memorable however sometimes come by accident like the time when I took a little Thanksgiving turkey out of the oven and the pyrex baking dish I cooked it in exploded as soon as I put it on the counter. Then there was a time a friend of mine invited me over for dinner and surprised me with a bag of frozen fish, beef stock, quinoa and then informed me that he invited 10 people over for dinner. I wanted to kill him.

Where do you like to eat when you’re not cooking?
When I don’t cook, I love to eat at Blackbear Tavern on Peachtree Street because I love their burgers, they have tater tots, and they serve booze and food until 2 a.m.

How did you come to decide to compete for a show on the Food Network?
A friend of mine who lives in Portland, Rhode Island, sent me a link that had the audition information attached. He said, “This has your name all over it and you have to give it a shot!” So, I did and now I am keeping my fingers crossed. You can’t reach the stars without putting your head in the clouds.

Who are your favorite Food Network chefs?
I love Ina Garten and Giada because they’re so bubbly and fun. I’d love to do a shot of fireball with them just to be a little redneck.

Who would you challenge on Iron Chef America?
I don’t have a desire to battle in an Iron Chef way, it’s too fast paced. It’s the same reason I have no desire to be a restaurant chef or actually work in a restaurant.