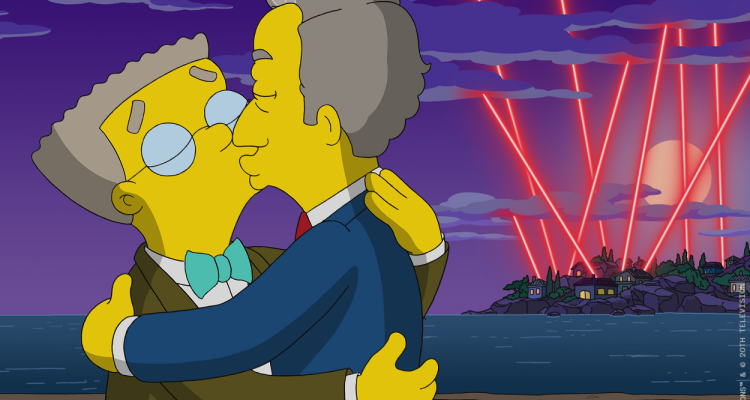 Waylon Smithers Gets Boyfriend in New ‘The Simpsons’ Episode

Waylon Smithers, the devoted right-hand man to the evil Mr. Burns in the classic sitcom The Simpsons will be getting a boyfriend.

In an episode airing on November 21 on Fox, Smithers – who came out on the show back in 2016 – will be swept off his feet by billionaire fashion mogul Michael De Graaf. The episode is titled Portrait of a Lackey on Fire, a nod to the queer historical romance film Portrait of a Lady on Fire. The official synopsis reads, “Smithers finds true love with a famous fashion designer, but will his new relationship destroy Springfield?”

Both the upcoming episode and the 2016 episode were written by series writer Rob LaZebnik with the help of his gay son Johnny.

“To be able to work with Johnny was, like, such a dream, and to be able to see how truly funny and talented he is was just, you know, super fun and rewarding,” LaZebnik told the New York Post.

Johnny echoed the sentiment, saying it was “so much fun” to write with his dad.

i can finally come out of the closet as a d’ohmosexual. watch a very gay episode of @TheSimpsons on november 21, written by me and my dad 😭😭😭 pic.twitter.com/RqlMcetIUv

Victor Garber, the openly gay actor who will voice De Graaf, told the New York Post that it was “crucially important” for LGBTQ stories to be told.

“I haven’t played a lot of gay characters, but every time I do it, it brings back certain feelings I had as a young actor where I couldn’t be gay. [The role] was kind of a reminder of how much things have changed and also how I’ve evolved. In my journey to find self-acceptance, self-love, it’s a definite significant part of it.”