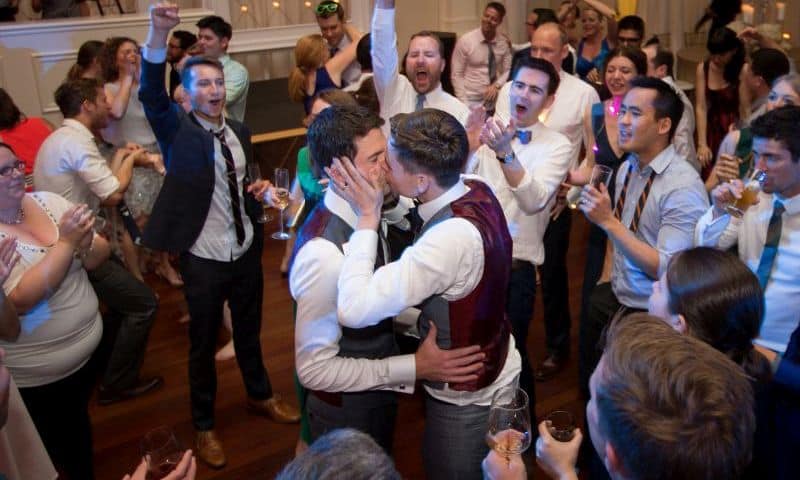 The Wedding Issue: Dale and Brooks

If you’re looking to meet your one-and-only, consider running a footrace. They’ll see you both clean and fresh-faced at the beginning and sweaty and drained at the end, so if they stick around it’s a good sign. That’s what happened for Dale Dwelle and Brooks Andrews, who met at the Bay to Breakers race in San Francisco in 2010.

“It was pretty much love at first sight,” Dale said. “We went on our first date the next weekend and have been together ever since.”

Brooks, who grew up in Marietta, popped the question over dinner on the mountains in Vail, Colorado on New Year’s Day 2014. “I was super nervous but finally pulled the trigger after dinner and proposed,” he says.

Atlanta’s Swan House at the Atlanta History Center was the choice for the big day over Memorial Day Weekend 2015—a day that began by defying their wedding planner. The pair, both avid golfers, got up and played East Lake Golf Club that morning. “It was against the recommendation of our wedding planner, but we thought it would be fun and would be good stress relief,” Dale says laughing.

From there it was time to get ready and take pictures with family at the wedding venue, followed by a pre-ceremony cocktail hour on the lawn of the Swan House. “We had this really cool string quartet playing over a DJ accompaniment, so it was classic strings but over modern day pop music, which really lent to the beauty of the location,” Dale recalls.

A good friend of the grooms officiated the wedding, which had about 150 in attendance, while each of their sisters talked about the history of them as individuals and as a couple.

“There was a really good theme about love and acceptance as far as the theme of the actual event,” Dale says. From there it was on to the ballroom of the Atlanta History Center for the reception to dance the night away.

Several moments stood out as special for Brooks, including the first time they walked into the ballroom to see what wedding planner Christopher Confero had come up with.

I think we appreciated that we were not capable of choosing flowers and colors and tying a theme together and all that good stuff,” Brooks says laughing, “so we got a little sneak peak of it before everybody walked in and that kind of blew me away. We had just seen a couple of colors on paper but nothing in real life so that was pretty awesome.”

For Dale it was a moment the couple shared inside the Swan House during the pre-ceremony cocktail hour. “Amid the chaos of the day, we got a unique opportunity to really relax and embrace one another and look out on the lawn below and see all of our guests having drinks. That was the time that I personally got really emotional and really started crying, and it was good because that actually allowed me to keep it together during the service.”

Little did the couple know that just one month later, the U.S. Supreme Court would make marriage equality the law of the land, which just made the experience all the more sweet.