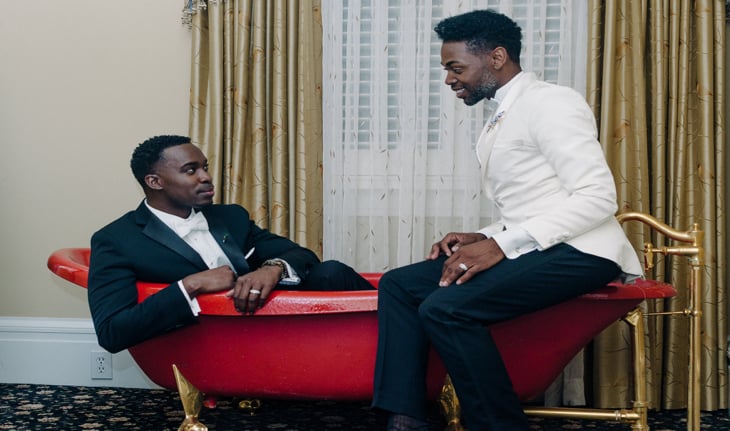 The Wedding Issue: Seven and Victor

Each year Victor L. Jones-Moore marks his birthday with a pair of designer sunglasses. His closest friends know of the tradition, so when one invited him to her department store job to choose a pair, he wasn’t suspicious.

Within moments of his arrival, however, his friend had introduced him to another male friend of hers, Seven, and disappeared.

“I recall being very upset – I felt like I had been duped,” said Victor, who didn’t realize that his meddling friend had introduced him to his future husband.

What followed was a whirlwind romance that culminated in a high-profile ceremony that joined two of gay Atlanta’s budding power players. Today, the newlyweds are nurturing emerging careers in makeup and hair design, and settling into a union they believe will encourage other black men to take the plunge.

“There is a stereotype in the black gay community about marriage,” said Seven, who blames the down low media frenzy for the myth that black men don’t get serious with each other. “I feel like we challenged that,” he said.

Both men were happily single about three years ago, when their mutual girlfriend started trying to fix the two up. Neither was interested in dating – “each other or anyone else for that matter,” Seven said – and so they dodged their well-meaning friend’s efforts for months.

When they finally did meet at an area department store, things weren’t picture perfect.

“I was like ‘Oh God, here we go,’” said Victor, who nonetheless invited Seven to his upcoming birthday party. A few weeks later, Seven showed up and wowed the birthday boy with a $400 bottle of champagne.

“From his party on, we were pretty much together every day,” Seven said. “It became a really great friendship.”

A year in, the relationship was flourishing. But there remained an unspoken barrier: Victor had a rule about letting himself get too serious. It appeared the men couldn’t ever be more than just really great boyfriends.

“I had experienced it before – the games that were played,” Victor said. “I just always wanted to keep that distance.”

But then the father of two started thinking about the future. What if something happened to this man he cared about – would he even have rights to be by his hospital bed?

“I was like hmmm, I don’t like the insecurity of being unofficial and then I started to change my tune,” he said.

Unbeknownst to him, Seven had already planned to propose on their one-year anniversary, at a favorite Atlantic Station restaurant. He flew in family, but when the night came, it was so cold out that Victor rushed into the venue before everyone had gotten their cue.

He ran into a huge crowd of supporters yelling congratulations.

“I hadn’t even proposed,” remembered Seven, who quickly presented his beau with a black diamond ring.

On Nov. 29, the men donned custom tuxedos and said their vows before 150 guests in an elegant Roswell ceremony with couture, antebellum-inspired gowns and sumptuous catering.

Beyond being just a beautiful wedding, the men said their nuptials were a statement. Both speak of the difficulty of being a black gay male in the Bible belt.

“It can be a struggle so it was important for a lot of different reasons,” Victor said, adding that some of his closeted friends confided that their marriage helped them feel bolder about their sexuality.

Most importantly, the newlyweds said their union has helped their kids see that black love can survive.

“We had to do it for ourselves and for our children,” Seven said. “Sometimes you’ve got to fight a different type of fight to show people you’re in love.”