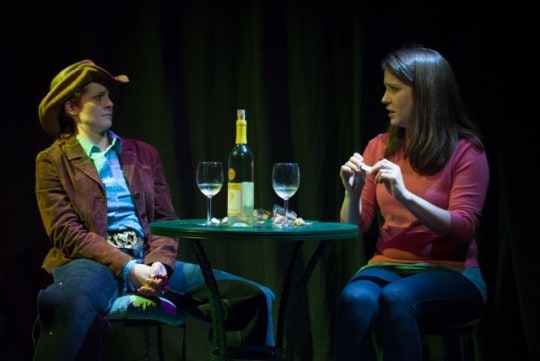 The latest by the LGBT- friendly The Weird Sisters Theatre Project, written by playwright Sarah Ruhl, is currently playing on the Actor’s Express stage.

In the show, Mary (Kellie Criss, one of the Weird Sisters founders) has married her high school sweetheart, Crick (Jacob York), whom she has known since grade school. The two are happy together until a face from the past shows up. Red (Orr) is a cowboy who has also known Mary for a while.

The play takes place over the course of a few years and holidays. The women are in their mid to late 20s and Orr feels they are in different places when they meet again and connect.

“I think for Mary, it’s a little more sudden,” Orr says. “For Red, when she sees Mary opening up to her, starting to enjoy her life and see her happy, the connection continues to grow. Red lets her talk about everything to her.”

Ultimately the play is about Mary’s journey toward chasing her happiness and figuring out what being happy means, says Orr.

“She can live a life where she is … living a routine, or she can follow what makes her happy from day to day, what makes her want to live life,” she says. “That is her friendship with Red. She discovers a lot more about herself.”

Getting ready for the part took some time. “With (musical director) Daniel Hilton’s help I kept practicing guitar,” she says. “I knew how to play but he wrote really beautiful music. We played around with classic tunes and country tunes. That is the way Red ex- presses her emotion, through music, and that is something Mary did not have in her life.” In all, Orr performs eight numbers and is quite comfortable doing so.

Another element of the character was emulating how a cowboy walks and speaks. “It’s very confident,” she says. “They know themselves. It’s a very simple lifestyle.”

Orr admits to being a huge fan of playwright Ruhl. “She gives you every single thing in the text, but every line is important,” says Orr. “[The play] has a lot of hidden meanings and metaphors that, throughout the process until opening we were going ‘Oh,’ discovering more and more how word choices affect later things in the play. You continue to discover this character. I think people will think about these characters long after what they saw.”

Orr moved to Atlanta during the spring of 2011 after graduating from Valdosta State University. “There is so much going on (in Atlanta) and you can be a real actor,” she says.

One of her theatrical highlights is “Spring Awakening” at Actor’s Express and being part of the company’s intern program. “I got to do work that suited me and explore things I didn’t in college,” she says. One of the people who took her under his wing early on was Brian Clowdus, artistic director of Serenbe Playhouse.

She is handling the design for Serenbe’s new “Oklahoma!” which involves many lassos and whips. “He said I want some of these fights to be as much fun as possible and some to be really scary,” she says. “He gave me creative freedom to do it.”

Since its debut in 2011, Weird Sisters has not been shy about producing work with lesbian characters. Last summer’s “5 Lesbians Eating a Quiche” was a comedy about closeted women and the threat of Communists taking over their town; in 2012 the company produced a superb version of “Anton in Show Business.”

“They are extremely open to choosing material such as that,” says Orr. “I am having a great time working with them. I feel like they are going to be around for a long time. They produce quality work.”