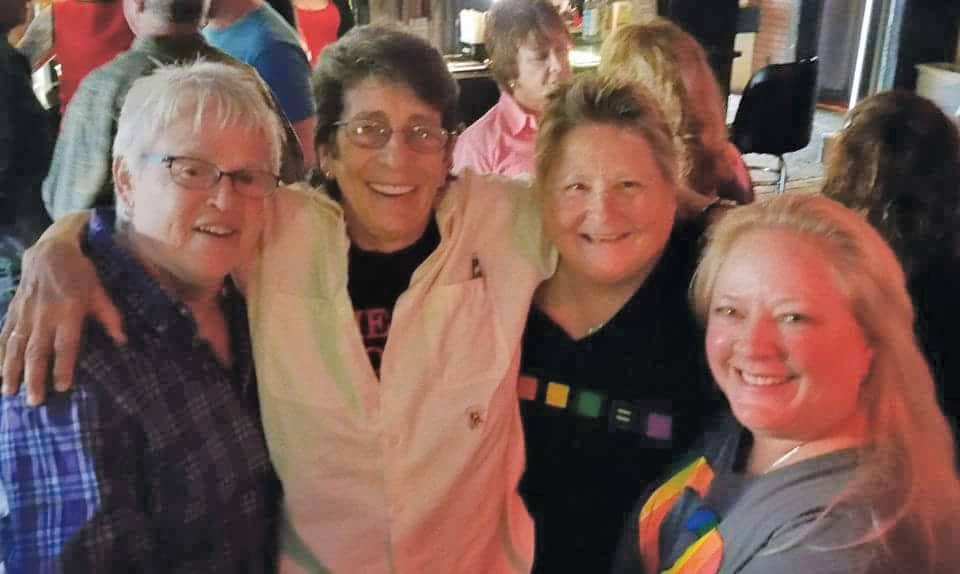 Where the Girls Were

Conswella Bennett
Culture
August 2, 2018
In the late 1970s, there was one Atlanta lesbian bar that left a lasting legacy on its patrons —  The Sports Page of Atlanta.
The loud, bumping disco music of the time permeated the bar and lured women to the dance floor to do their ‘Sports Page Shuffle’ to “We are Family” by Sister Sledge. With a chuckle, Sandy Wilson, a regular at the Sports Page, recalls that ditty as one that got everybody on the dance floor.
“To this day, hearing that song on the radio will bring back a memory,” Sandy says. “I remember hitting that dance floor.”
She was there the night the club, located at 2069 Cheshire Bridge Road, opened. B.C., a local lesbian who owned it  — along with other lesbian clubs in the city — purchased the larger building, an former seafood restaurant.
Sandy was friends with B.C., who also owned another lesbian bar she’d opened earlier in the 1970s — Towers Lounge on Forrest Road. Towers has been described as a small-hole-in-the-wall club space. According to Sandy, though, it was more of a biker bar. That night, Sandy recalls, she looked around the large club with a few people in attendance, and her initial thought was that the space was too big.
She remembers thinking that The Sports Page wouldn’t make it. She would be wrong.
“The Sports Page was the crème de la crème,” Sandy adds of the club that closed sometime in the 1980s. “I’ve been all over the United States, and I’ve never seen a club like it. It was family.”
Kathy Deibler, one of the club’s former DJs, cocktail waitress, and later manager of The Sports Page, agrees. “I miss the good old days,” she tells Georgia Voice. Her fondest memories were being in the DJ booth, sometimes in some crazy costume, watching hundreds of women dancing to disco.
“The girls liked to bump and grind,” Kathy recalls of the decisions behind her nightly musical selections, with occasional rock hits making the rotation. The ladies came out and danced on one of the biggest dance floors in Atlanta. Kathy describes the floor as Plexiglas, with boxes around the floor highlighted in many-colored lights.
Besides the dancing, Kathy remembers the popular Wednesday night 25¢ Old Milwaukee beer nights that always brought in the crowd. They were almost always out of the beer special by 11pm. Tables were covered in the little 8oz. plastic cups, she says.
Although, Kathy moved out of state for a while, she would return to the club and serve as manager.  During that time, she held a number of events to continue attracting the girls, such as mud wrestling and wet T-shirt contests. “We did a lot of things clubs don’t do now,” she adds. And, of course, there were the drag shows that everyone looked forward to.
Unlike today, both Sandy and Kathy recall fondly that, back then, there were different activities going on both inside and outside the club that brought everyone together.
“It wasn’t always about drinking,” Sandy says. She adds that they played on softball teams, played sand volleyball on a court put in behind the club, shared holiday dinners together, and did a number of activities outside the club.
“In the 1980s, it wasn’t cool to be gay,” Sandy says. “People were shunned by their families or were still in the closet. My family was The Sports Page.” She reminisces about the Thanksgivings, Easters, and other holidays with her Sports Page family. “We were all we had.”
Both Kathy and Sandy feel today’s generation doesn’t party like they used to do. Both speak of the long-time friendships that were made at The Sports Page. Like the infamous lesbian-connection chart from “The L Word,” there were hundreds of friendships made, some becoming relationships. Lasting or not, everyone seemed to remain connected via friendship.
“How many people can say they are friends with over 300 people, [having personally known] them for over 35 years?” Sandy asks. “You don’t have that now. I’m very grateful for those years, times, and friendships. The friends I have now are the friends I had in the 1980s.”
Those 300+ friends are a part of a closed Facebook group, The Sports Page. There, they reminisce about the good times at The Sports Page, update each other on recent news in their life, and sadly, where they find out about friends gone too soon.
To reunite as a family, Kathy initiated three Sports Page reunions. The first was held in 2010 at a former LGBTQ club in Tucker, the Stage Door. In 2011 and 2016, the reunions were held at their old stomping grounds, which is now Heretic Atlanta.
Sandy recalls of attending the 2011 reunion at the Heretic, “When I walked up to that door, the Heretic guys were standing at the door, and they said, ‘Welcome Home.’” Moved by the gesture, Sandy adds, “I was home.”
Plans are being made to hold a final reunion in October 2019 during Atlanta Pride.  Kathy said the plan is to return home to the Heretic for the final event.