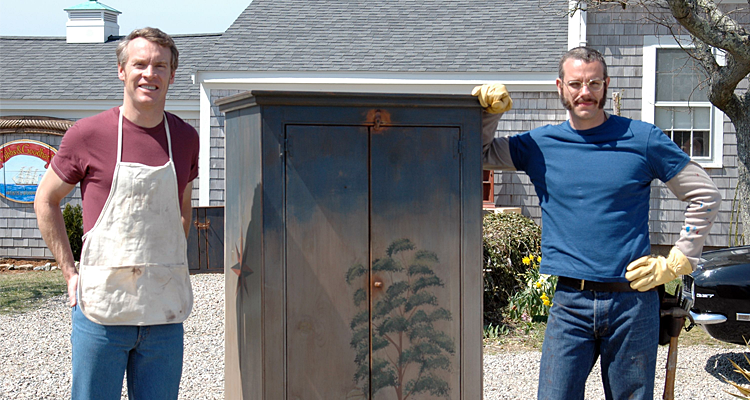 Tate Donovan has worked on hundreds of projects over the years, but he never dreamed that a movie he filmed over a decade ago now would suddenly re-emerge on a streaming platform. His LGBTQ-themed “Wild About Harry” is now available.

The film — directed by Gwen Wynne and based on her own upbringing — met some acclaim upon its festival run and now has a distributor, Global Digital Releasing. The film is set in 1973. Donovan stars as Harry, an English widower who moves to Cape Cod with his teenage daughters. One night, as one daughter visits Provincetown with high school friends, she sees their dad dancing with another man, his business partner Mr. Gibbs (Adam Pascal). Soon, the daughters discover the two men are in a romantic relationship, and not everyone in the family takes the news well.

Donovan was pleasantly surprised to hear earlier this year that the film was getting a release and would be available to a wider audience.

“The beautiful thing about streaming is that things that might have been overlooked for no fault of their own can get a second chance,” he said. “When I heard they were going to stream it again on a big platform I thought, ‘This is great.’ It’s fun to see it so many years later and see how it is still relevant even though big changes have happened.”

According to the actor, the real-life character of Harry started a furniture company and was a pioneer in American folk art. He was from England, but came to America, went to school here and fell in love with Wynne’s mother. Donovan said that he doesn’t feel he specifically kept the relationship a secret from his daughters.

When he re-watched the film recently, he initially thought that with gay marriage legal and people accepting of it, it might make the film feel less important. He was heartened to see, though, that the themes were still relevant.

“One of the reasons is that it is seen through the teenagers,” Donovan said. “When I was filming it I thought it should be about Harry and Mr. Gibbs, but looking back on it I am so glad it’s about these teenagers. It’s a universal story of children looking at their parents and realizing they are human too. They make mistakes or have secrets or have a different life than they imagined. It’s also about coming into your own sexuality and what that is about. It is such a dramatic and beautiful time, and I love how Harry and Mr. Gibbs react.”

The film is autobiographical for director Wynne. “I think it was hard for her,” Donovan said. “What I liked and respected about her is that after casting these roles, she gave us room to be different than her dad and her or her sister. She divvied up the responsibilities of the story amongst us and let go. That was also her first film and she had to get all the financing.”

Donovan did not meet Pascal until they were on set together, but had been a fan since he had seen the actor in “Rent.” Both actors have played gay before.

While Donovan is known for high-profile projects such as TV’s “Damages” and films such as “Argo” and 2021’s “Respect,” he has also done his share of independent projects. Those projects are different beasts, however.

“It’s really tough for independent films to get a place to be seen. It’s hard. This was a real act of love. Even while we were shooting it we ran out of money and we had to go home. We were heartbroken and devastated. We are used to this. Money is hard to come by in independent films.”

“Wild About Harry” is now available on digital/on demand.