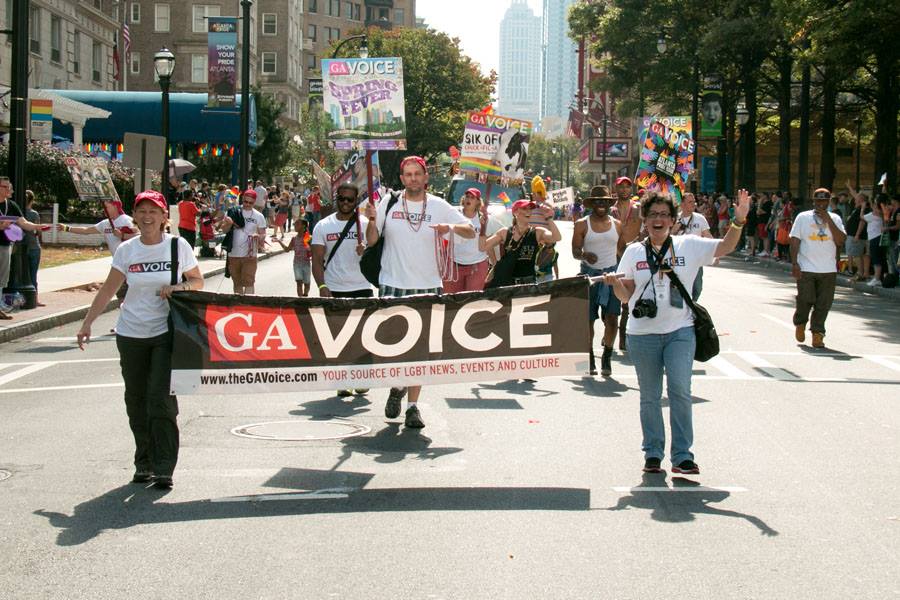 The first LGBT equality rally I attended in Atlanta was on Feb. 14, 2004. A few hundred people stood in the rain on the steps of the state Capitol to decry the General Assembly’s attempt to write discrimination into the state constitution by drafting an amendment to ban same-sex marriage.

This was not a joyful rally, of course, but it was thrilling to stand there and hear from so many people I had read about in local newspapers, including the (now shuttered) Southern Voice. While there, I also looked around for the reporters whose work I had been reading and admiring.

I thought, wouldn’t it be great if someday I could be one of those reporters, writing about something as important as the fight for equality?

I became a reporter straight out of college, some (cough) 20 years ago, at the Herald-Citizen, an afternoon daily (except Saturdays) newspaper in the small Tennessee town of Cookeville.

At that paper, I learned how to listen, ask questions, write a compelling lede, take photographs and cover controversial stories (fairly) objectively. I loved the adrenaline rush that hummed through my veins during a breaking story, making me feel alive.

Most importantly, I loved the people who shared their intimate stories with me, so I could in turn write and share them with the rest of the world. That responsibility is humbling, and I will always be proud to have borne it.

When I decided to live my life openly as a gay person, I packed my bags and cats into my dusty Nissan Sentra and headed for the LGBT mecca of the South: Atlanta.

I was soon able to find a job at the Gwinnett Daily Post, and was back in the groove of working for a daily newspaper.

During this time, I also found the Southern Voice and was amazed and so glad there was an entire newspaper devoted to reporting on issues facing LGBT people, people like me, and that there was a community that sup- ported this newspaper.

When the General Assembly decided it was time to let Georgia voters decide on a ban of same-sex marriage—and codify it into the state’s constitution—I knew I wanted to be part of the fight against it. I was angry and hurt. After all, I left small town Tennessee for big city Georgia to be able to live my life openly, and now legislators were telling me and all other LGBT people that we were wrong for wanting equality because their God said so.

Believe me, I’d had enough of my own dealings with God—trying to pray the gay away, forcing myself to date men, etc.—that this attitude pissed me off. I armed myself with a keyboard and camera and began my career in LGBT journalism in 2004, just months before the crushing defeat we were handed when 78 percent of Georgia voters essentially told us, “We don’t like you.”

When I became deputy editor of Georgia Voice just over five years ago, I was excited to be part of a new vision and so happy to be covering the community I love. Then I became editor, fulfilling a dream of heading up one of the best LGBT newspapers in the country.

Now, I’m saying goodbye and leaving this job to a new generation of journalists who have the drive, the energy and the talent to lead this newspaper into an exciting era of reporting on the stories that spell out the fights we still have to face while also celebrating the sweet victories.

One such victory is marriage equality. Like many activists, I never imagined Georgia would be poised to have marriage equality, along with the rest of the nation, just over a decade after that somber day in 2004.

As a state, as a country, we have come full circle when it comes to marriage equality. My career as a gay journalist has also come full circle. I’ve covered more than a few rallies, and will be covering at least one more before I officially hang up my fedora. I believe being here for the very end of a story that’s been ongoing since the start of my career is an excellent way to close my career, step down and find something new to do. I’m not sure what that entails, but I look forward to restarting while also remaining active in our movement.

I know there is still so much to do. Not only in the fight for LGBT equality, but for full equality for all of us. We have only to look at the church massacre by a racist gunman in Charleston, S.C. and the numerous police shootings of unarmed black men in this country to know a federal victory does not mean complete victory for any marginalized community. Please, stay vigilant.

Thank you for the memories and for sharing your stories. They all remain in my heart.