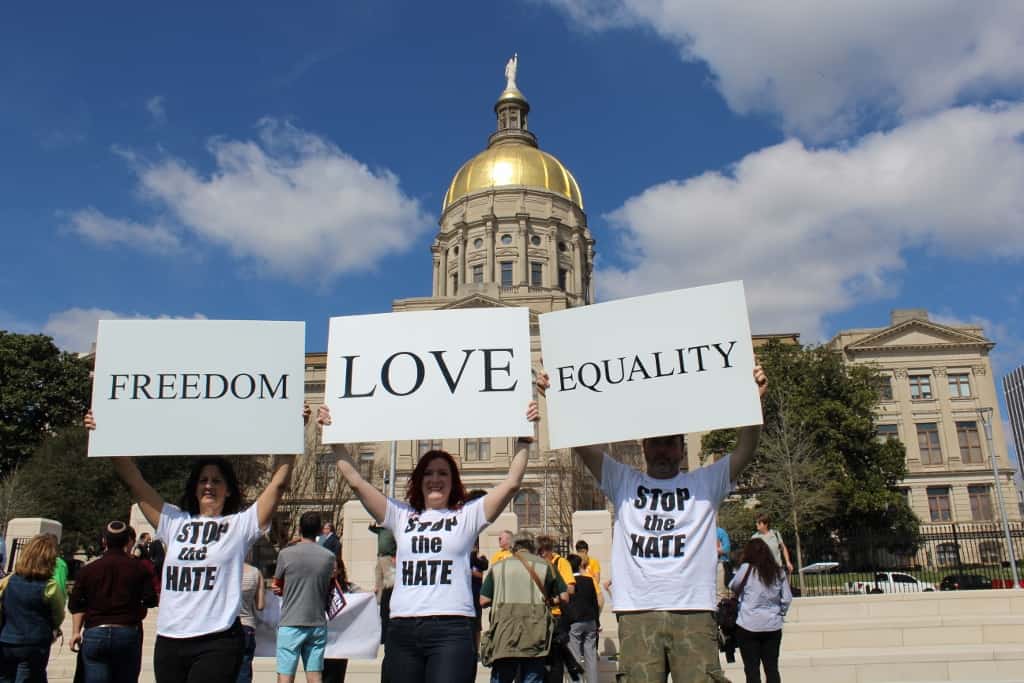 When the supporters and sponsors of Senate Bill 129/the “religious freedom”/RFRA bill say that they can’t possibly see how anyone could use it to discriminate against lesbian, gay, bisexual, transgender people and others, they’re not lying to you. It’s not that they don’t believe that SB129 won’t be used to deny people services in public accommodations, housing, and to subvert existing non-discrimination clauses—they absolutely understand that—and they support that. They just don’t think that’s discrimination.

For too many of our neighbors here in Georgia, ensuring there are barriers in place to keep LGBT people away isn’t discrimination; it’s “living out one’s faith.”

While waiting in line to get in to Tuesday’s hearing, a woman struck up a conversation with me. I was wearing a “No Discrimination in Georgia” sticker; she was wearing an “I support religious freedom” sticker, and she had a video camera with her. It turns out she’s the one who produced the video that linked the SB129 fight back to Kelvin Cochran and LGBT people (and shows sponsor Josh McKoon linking the bill back to same-sex marriage, too).

She asked me why I was against SB129. I replied that it could be used to discriminate against LGBT people, and that I thought it needed explicit protections to ensure that couldn’t happen. Her response to me was very telling: “This bill wouldn’t allow anyone to discriminate! It simply protects Christians who are trying to live out their beliefs every day!” She continued on, saying that she is horrified that some people think that one should only be Christian in their church and questioning why people have to speak out against pastors with whom they disagree. Why can’t someone just choose a different church if they don’t like what’s being said?

I answered, “When your disagreement means seeing certain groups of people as undeserving of God’s love and legal protections? Of course we speak out!”

“Because I should have the right to go into any public store and purchase any item that’s for sale, just like any other citizen. Period.”

And that was it. That’s when I realized that it didn’t matter what I said next.

I explained that opening the door to allowing one type of discrimination could lead to many others. “Well, I just don’t know anyone who would do that!” was her only response.

I stopped when I realized I could argue until I turned blue in the face that this type of denial of service is specifically what we’re fighting against becuase she didn’t care. It was her religion, and nothing could get in the way of that. Other people joined our conversation, and almost all of them said the same thing: “Why can’t you just go shop somewhere else? Why do you have to push your beliefs on us? We aren’t discriminating, we just can’t go against God like that.”

It’s not just a matter of semantics. Keeping LGBT people out of their church, out of their businesses, and out of their lives isn’t a matter of discrimination. It’s living out their faith. To even appear to be moderately accepting of people who believe differently is an affront to God for them.

That’s why everyone has been so explicit on keeping a non-discrimination clause out of the religious freedom bill. To allow a non-discrimination clause would criminalize what they believe to be an honest (and good) expression of their faith. It would explicitly forbid them from carring out their religious beliefs in society—and that’s exactly what the purpose of SB129 is. It protects people—and private corporations—from having to do ANYTHING that goes against their religion, and that includes acknowledging the right of lesbian, gay, bisexual, transgender, and other people to live their lives in peace and security, as full members of society.

For the Faith and Freedom Coalition, the Georgia Baptist Convention, the Alliance Defending Freedom, and their supporters, who are some of the loudest voices against ensuring LGBT rights and safety, the mere fact that LGBT people exist is offensive to them. The mere fact that we can live our lives openly and honestly is an affront to them and to God. That we have accepting places of worship and spritual and religious homes is beyond their scope of comprehension.

So when our lawmakers tell us that SB129 isn’t intended to be used to discriminate against anybody, they’e not lying. For them, using the law to keep LGBT people marginalized isn’t discrimination, it’s doing to the work of God.

Robbie Medwed is the education director of SOJOURN.